COVID Or Hypothermia, Trump Doesn't Care How He Kills People 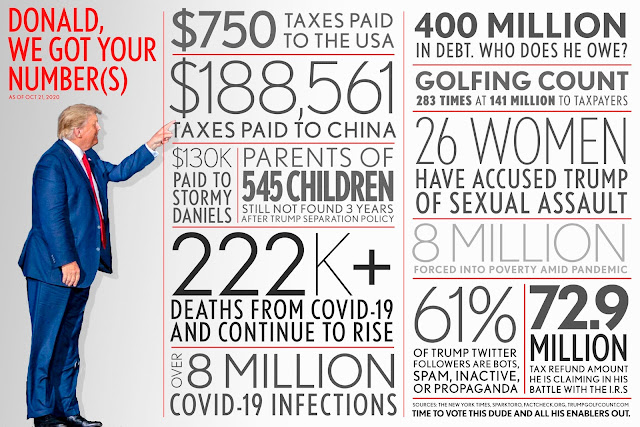 Trump fans chant "lock him up!" about Joe Biden. It's a hate movement.

Trump responds by saying, "is there any place that you'd rather be than a Trump rally on about a 10 degree evening?" pic.twitter.com/6wR7TKdqmm

Trump held a rally at an Omaha airfield. He bussed in the supporters. After, he flew off in Air Force One, abandoning the attendees in the freezing cold with no buses. Omaha PD had to clean up his mess. Multiple people transferred to hospital for hypothermia or related problems. https://t.co/Pu4LjtIk5O

Trump’s rally last night stranded hundreds of his supporters in the cold for hours, sending seven people to the hospital for hypothermia, and leading to who knows how many COVID cases. https://t.co/Lgi1ZUD9aK

Hundreds of Trump supporters were left in the freezing cold for hours after a rally at an airfield in Omaha on Tuesday night, with some walking around three miles to waiting buses and others being taken away in ambulances. https://t.co/0nJJvqiaiY

“For hours, attendees — including many elderly Trump supporters — stood in the withering cold, as police scrambled to help the most at-risk get to warmth. At least seven people were taken to hospitals,” ⁦@timelfrink_dc⁩ reports. https://t.co/CzscQckC1h

This is fucking perfect. Literally the perfect metaphor for Trump's entire business career and presidency. He is a fucking orange tsunami. He will fuck you over and just keep going. He still owes MILLIONS from his 2016 campaign. #ETTD https://t.co/oNAq001J1u

What gets lost in the whole "Trump stranded his supporters and gave them hypothermia" story is that he was transporting them to the rally on crowded buses. In the middle of a pandemic. With no masks or precautions. It's like a pandemic turducken. https://t.co/cIjpQfHBYG

There is a spike in the Midwest, but this is not a "one area" thing. Things are getting worse in most of the country. https://t.co/3X65OtIPva pic.twitter.com/jgliXVmEA5

What is he, the virus's PR guy, trying to get his client more positive coverage?
Posted by allan at 9:43 AM