Trump: "We Want To Be A 'Developing Nation', Too." 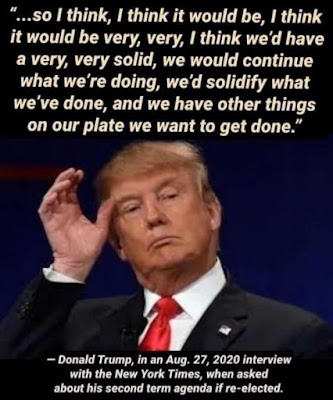 As we head into the final stretch of the election, Covid-19 is on a roll.

Coronavirus cases keep hitting records — among other things, five aides to Vice President Mike Pence have tested positive. Hospitalizations, which lag behind cases, are soaring. And deaths, which lag even further behind, are starting to rise, too. Put it this way: Just between now and Election Day, we're likely to lose almost twice as many Americans to Covid-19 as died on 9/11.

So how is the Trump administration responding? Actually doing anything about the pandemic is apparently off the table. What we're getting instead is a multilevel public relations strategy: We're doing a great job. Anyway, there's nothing anyone can do. And besides, doctors are faking the numbers so they can make more money. . . .

[Trump's plan is a] combination of denial, declared helplessness and conspiracy theorizing . . .


This whole remarkable interview is Mark Meadows saying they've given up trying to do anything to control the virus because it makes the president look bad. Their plan is to let the country burn. https://t.co/Rl03qlaIX6

Tapper to Mark Meadows: "Just yesterday, President Trump said 'we are rounding the corner & it's going away.' Mark, it's not going away even in the WH! But beyond that, the US reported 83,000 new cases on Friday and Saturday. That's the 2 highest days of the entire pandemic." pic.twitter.com/gCXUB2I2xh

In reality, they are working nonstop, often without adequate PPE, because this administration failed.

To date, more than 1,700 have died.pic.twitter.com/vraCBgE1m8

Wow -- Trump pushes a baseless conspiracy theory that US coronavirus deaths are overcounted because "doctors get more money and hospitals get more money" if they say people died of Covid instead of other co-morbidities they might have pic.twitter.com/9ug2AjoZvA

Biden on Trump pushing baseless conspiracy theories about US health care workers overcounting coronavirus deaths: "What in the hell is the matter with this man?" pic.twitter.com/3BEB8HME7W

North Korean TV anchors would cringe at this stuff https://t.co/MicEyo9fuD

"We're rounding the turn. You know, all they want to talk about is Covid. By the way, on November 4, you won't be hearing so much about it. 'Covid Covid Covid Covid.'" -- Trump in Allentown, Pennsylvania, as new US cases hit record levels and hospitalizations increase pic.twitter.com/zoq4AGV00W

Trump says he never watches CNN except for when he watches it, like this morning pic.twitter.com/MEor550Rme

Trump, who has repeatedly said that foreign leaders want Biden to win because Trump is so hard on them, now makes stuff up and claims that a foreign leader told him they want Trump to win because "we don't want to deal with someone who sleeps all the time." pic.twitter.com/4S8neuLIoj

"This Savannah Guthrie, who is just terrible. She was coming out of her chair. She was crazed." -- Trump has now bashed Kamala Harris, Lesley Stahl, Nancy Pelosi, and Savannah Guthrie during this speech pic.twitter.com/KStKOqlDRY

"Nice trucks. You think I could hop into one of them and drive it away? I'd love to do it. Just drive the hell out of here. Just get the hell out of this. I had such a good life." -- Trump pic.twitter.com/0sZC13WH9O

Trump in Lititz, Pennsylvania: "We're not developed ... we want to be a 'developing nation' also." pic.twitter.com/1iAmFxkRbt

"Remember when I campaigned four years ago, I said 'we will be saying Merry Christmas again.' We do." -- Trump declares victory in the (fake) War on Christmas pic.twitter.com/5Chguy6a0X

"We will have the vaccine, like, momentarily" -- Trump pic.twitter.com/VNcLI6tLum

"Organically, there are rallies of boats -- thousands of boats -- all over the place." -- Trump on his beautiful boaters pic.twitter.com/XMpBqBAxuG

"He called me George yesterday" -- Trump pushes a lie that Biden called him George W. Bush (he was doing an interview with George Lopez) pic.twitter.com/7YRBMIuEGx

Trump's position is more or less that the coronavirus is a media hoax that normal people for the most part shouldn't care about because they'll be fine if they get it pic.twitter.com/d2fRva87jo

look for this right after infrastructure week pic.twitter.com/eZXCCc7VFF

is there anything Trump could say at these rallies that his followers wouldn't buy? pic.twitter.com/8NHfUkIJiD

While bashing Biden, Trump gets confused and says Biden is "going to give you the biggest tax cut in the history of the country." pic.twitter.com/SaT8MjpHn2

He doesn’t actually think about what he’s saying. He just repeats a series of phrases. Since he’s losing his mind, the phrases are getting corrupted.

After the crowd chants "lock her up!" for Hillary Clinton, Trump says "now [the chants] are happening with Biden because that's a crime family, frankly. But every time that happens, when they say 'lock her up,' they always blame me & I have nothing to do with it." pic.twitter.com/SjKrfadJIv

Barack Obama didn't have a crowd for his speech today, dear reader, because he did not give a speech today pic.twitter.com/ZrJUaeMqAm

"We're the party of Abraham Lincoln. A lot of people don't know that." -- drink! pic.twitter.com/sTABrVmw4M

"Everyone thinks that Abraham Lincoln was a Democrat" -- Trump pic.twitter.com/C5QTvhzXJ5

Trump: The great Abraham Lincoln, a man that I’ve always competed against pic.twitter.com/KLPnh5U1hu

This makes sense in that Trump does fancy himself as the leader of the Confederacy https://t.co/JetE7j2myS

Dude, just because you're popular with the Klan, doesn't mean you're competing with Lincoln. https://t.co/xGWluWJHEB

"We have made America safe again," Trump says, as the country endures the largest mass death episode it has experienced in over a century pic.twitter.com/3wWTeAGmST

Maybe what he is trying to say is that He has made America safer by ensuring 225,000 dead Americans can no longer spread the virus. Somehow, in his mind I’m sure this makes sense. #TrumpVirus

For at least the fifth time this weekend, Trump just bragged about the military's "Hydrosonic" missiles. "Hydrosonic" is a brand of toothbrush. pic.twitter.com/nupohu8dn4

"I call 'em super-dupers" -- here's a supercut of Trump bragging about the military's "Hydrosonic" missiles.

("Hydrosonic" is a toothbrush brand; the word Trump is looking for is "hypersonic," but over a span of many months nobody has bothered correcting him.) pic.twitter.com/RXO3E2PHP3

I guess they prefer someone who golfs all the time at his own golf courses and makes American taxpayers pay potentially $340 million. https://t.co/eNnAtg8RSz #TrumpDeathToll230K @gtconway3d

That's right, Black people. You have to WANT to be born the son of a multimillionaire real estate tycoon https://t.co/OnVjlSTMIc

“30 days to slow the bread” pic.twitter.com/JVJtntCpS5