Q: How Full Of Shit Was Pence During the VP Debate?
A: A Fly Landed On His Head And Hung Out For More Than Two Minutes 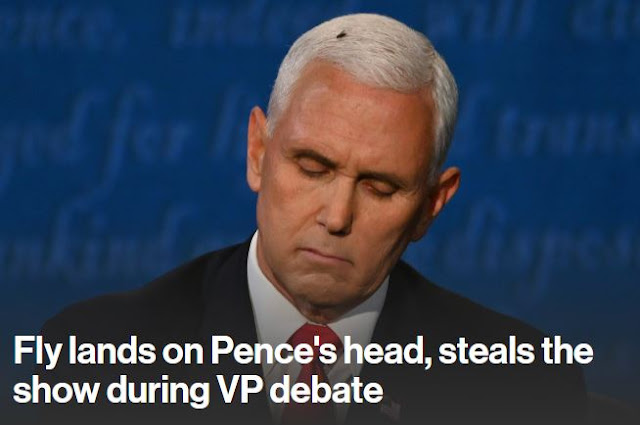 These are the first words out of Harris's mouth: "The American people have witnessed what is the greatest failure of any presidential administration in the history of our country." pic.twitter.com/vci6g5O3DT

Harris: "They knew and they covered it up. The president said it was a hoax. They minimized the seriousness of it ... in spite of all of that, today they still don't have a plan." pic.twitter.com/FKgk1acvE4

Q: Why is the US coronavirus death toll higher than comparable countries?

PENCE: *doesn't answer the question but instead touts Trump's accomplishments*

[get a look at Harris's face while he says this] pic.twitter.com/7J26RIprxa

"Donald Trump is in debt for $400 million. Just so everyone is clear, when we say 'in debt,' it means you owe money to somebody. It would be really good to know who the POTUS, the commander-in-chief, owes money to." -- Harris pic.twitter.com/6pDTiKX9tz

Note how Pence does not deny the NYT's reporting about Trump's taxes but instead says "the president denies" it pic.twitter.com/Sjrt3n4n4a

Harris: I think this is supposed to be a debate based on fact and truth pic.twitter.com/qQYfqWrznF

"If you have a preexisting condition -- heart disease, diabetes, breast cancer -- they're coming for you" -- Kamala Harris pic.twitter.com/zNwd6IrKhA

Harris: You lost that trade war. You lost it. pic.twitter.com/3ofdSx7d2d

"China is to blame for the coronavirus, and President Trump is not happy about it" -- Pence pic.twitter.com/nQCSfWS6qT

Pence is finally cut off pic.twitter.com/tLGBHnqV95

Pence has had a fly on his head for about 5 minutes pic.twitter.com/BGrgePazDG

There is a fly on Mike Pence's head.... pic.twitter.com/0hNL2Cefcx

Can flies get COVID? I’m worried about that fly’s family.

Yet Another Republican Who Doesn't Care About Anyone Else But Himself

"I have to admit that I let my guard down because we'd all been tested about two hours before the event... in every case, we should wear a mask because scientists tell us to do it. At any point when I'm near people, I'll wear a mask going forward."-Tillishttps://t.co/lQnyl99NJ5

How long has coronavirus been raging through the White House and why doesn’t the Trump administration want to get to the bottom of it? https://t.co/BkhRb7IRWJ

Schmidt: They did nothing to protect their citizens.. and they’re saying give me six more years? Well using the colorful colloquialisms of my native New Jersey, there’s a response to that and it begins with “go” and ends with “yourself” pic.twitter.com/WglSQOcE89

The Answer Must Be Incredibly Damning, Since They Have Been Refusing To Answer For Days

If the answer to this question wasn’t explosive, they’d have given it by now. https://t.co/B0HMVNJKus

The way this generally works is: politicians don’t answer easy questions — even when the constant refusal to answer becomes a news story in itself — when the answer is more damaging than the obvious stonewalling. https://t.co/78gaoZpMX5

This should be the first question to Mike Pence at tonight's debate and there shouldn't be a second one until he answers it. https://t.co/2Er2rZ0XRL

I can help. I'm Adjunct Professor at Trump Univ GMT Dept of Geography & Mappy Things. The ancient warrior tribe of the Cought were famous escapees from the Cotswolds, situated between Seekistan & Findlandia. Primitive beds or 'cots' are named after the Coughts#TrumpDevastation pic.twitter.com/tiZxI4dYUr

Obama, Biden, Crooked Hillary and many others got caught in a Treasonous Act of Spying and Government Overthrow, a Criminal Act. How is Biden now allowed to run for President?

Trump Says Catching COVID Was A Blessing From God

In his WH produced video, Trump praises the experimental medication he's been on, saying of COVID: "I think this was a blessing from God that I caught it." Trump has access to medical care not available to most Americans.

Trump also says during the video that he "got back a day ago from Walter Reed medical center.” Yet, COS Meadows says Trump recorded the video today.

How can I get you in this 1987 Toyota Tercel? pic.twitter.com/Eju0Fq4pfg

Who In TrumpWorld Illegally Profited From This?

Regeneron stock jumped more than 14 points in after hours trading in the minutes after the president posted his video calling its experimental antibodies a cure. https://t.co/RW4YIdoYzK pic.twitter.com/3iVPmoaCeL