"Trump Turns On Everyone" (He's Throwing Paranoid Temper Tantrums And Thinks Everyone Around Him Is Weak, Stupid, Disloyal, And Beneath Contempt) 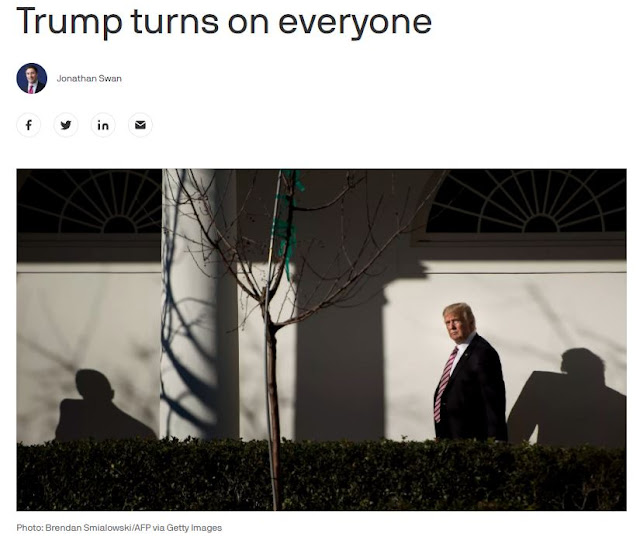 President Trump, in his final days, is turning bitterly on virtually every person around him, griping about anyone who refuses to indulge conspiracy theories or hopeless bids to overturn the election, several top officials tell Axios. . . .

Trump thinks everyone around him is weak, stupid or disloyal — and increasingly seeks comfort only in people who egg him on to overturn the election results. We cannot stress enough how unnerved Trump officials are by the conversations unfolding inside the White House. . . .

Trump is lashing out . . . [I]f you're not in the "use the Department of Homeland Security or the military to impound voting machines" camp, the president considers you weak and beneath contempt. . . .

Trump is fed up with Cipollone, his counsel . . . and [may be thinking of] replacing him with a fringe loyalist.

A source who spoke to Trump said the president was complaining about Pence and brought up a Lincoln Project ad that claims that Pence is "backing away" from Trump. This ad has clearly got inside Trump's head, the source said.

Trump views Pence as not fighting hard enough for him — the same complaint he uses against virtually everybody who works for him and has been loyal to him. . . .

Trump would view Pence performing his constitutional duty — and validating the election result — as the ultimate betrayal. . . .

Trump has even been asking advisers whether they can get state legislatures to rescind their electoral votes. When he's told no, he lashes out even more. . .

As Axios reported Monday night, the president got his personal assistant to email Republican lawmakers a PowerPoint slide attacking McConnell for being "the first one off the ship," and absurdly claiming credit for the Senate majority leader's victory in his Kentucky re-election. That's quite a message to send two weeks out from crucial runoff races in Georgia, where Republicans need to stay unified.

Giuliani Is Worried Trump Is Listening To Kraken Lawyer, Whose
Advice He Calls Outside "The Bounds Of Rationality, Common Sense,
And The Law" (Advice Which Rudy Completely Agreed With
And Supported Only A Few Weeks Ago)

If your plan is too out there for Rudy Giuliani, you know you're in trouble https://t.co/9LnIv91Tmb

Pretty sure he was echoing her irrational claims about voting machines, Venezuela and George Soros. Sounded like they were on the same page back then

"President Biden, if he gets to be president" -- Lindsey Graham is still holding out hope that Trump might overturn the election and serve a second term pic.twitter.com/LSOhgJkNXO

"Before the next administration comes in, if President Trump falls short" -- who wants to tell @LindseyGrahamSC that the election is very, very over, and Trump lost? pic.twitter.com/gAkoxIqRFu

It's strange--I read the same news commenters and outlets you do and am equally depressed, distressed, and angry, but somehow when I see it all aggregated here, I get even more d, d, & a. The awood effect in action...