Donald Trump committed a crime this morning when he called Georgia Governor Brian Kemp and - "I would like you to do me a favor though" - urged him to convince the Georgia state legislature to overturn Joe Biden's victory by appointing electors who would ignore the results of the November 3 election and award Trump the state's electoral votes.
Trump also wanted Kemp to order an audit of absentee ballot signatures, something Kemp has already stated he has neither the power nor the authority to do. Trump made his (perfect?) call before his scheduled appearance at a rally in Georgia later today. Although Trump was unable to persuade Kemp to do his bidding, it's still a crime. As Josh Marshall of Talking Points Memo writes: "failure is not a defense":

We need to start understanding that these are quite literally crimes. If you call up the vote counter and tell him to change the numbers or throw away a bunch of ballots, that's a crime. The person saying no doesn't make it not a crime. We throw people in jail for sharing state secrets with foreigners, military plans, etc. because it's national security. But the security of the state [is] the most central national security.

If Trump invoked his federal authority in his conversation with Kemp or made his call from the Oval Office, he could have violated the criminal provisions of the Hatch Act, prohibiting government officials from political activity in their official capacity, according to Kathleen Clark, a law professor at Washington University.
A few hours after news of Trump's call to Kemp was reported, Trump committed the crime publicly by tweeting his illegal requests to Kemp.
Yesterday, judges in six states (including Arizona and Nevada) rejected the Trump campaign's claims of fraud and other voting irregularities. Trump has failed to stop the certification of the election results in every state he has contested. In Georgia, Republican officials certified Biden's win.
Saturday's event has the potential to be an epic train wreck. In the past week, members of Trump's legal team actually have been telling Republican supporters to not vote in the Senate runoff elections scheduled for January 5. And since Trump remains single-mindedly obsessed with his loss and cares about no one but himself, how much stumping for other Republicans is he going to bother with?
According to the Washington Post, GOP officials are working frantically to somehow make sure Trump stays on script. . . . Yeah, good luck with that.

[Trump is] furious with Kemp, a onetime ally. The president wants to "really go after him" . . . [He has] called him "hapless" on Twitter and told aides in recent days that Kemp was a "moron" . . . 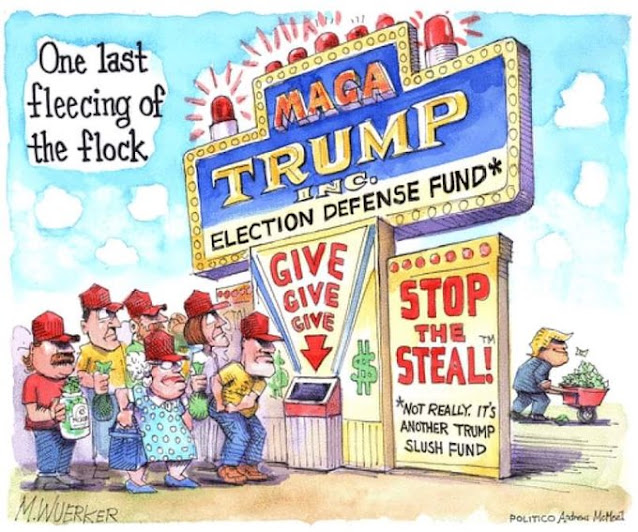 Trump could not care less about Senators David Perdue and Kelly Loeffler (though he ought to respect their astonishing high level of criminality). The only reason Trump is going to Georgia to continue running his on-going con. It boggles the mind, but Trump has raised more than $200 million since the election.

That is why he said during the debate that the debt was no big deal to him. Of course not. He is going to pay it with someone else’s money.

A team of Washington Post reporters surveyed all 249 Republicans in the House and Senate the morning after Trump posted his 46-minute whine-a-thon. Only 25 (10%) would acknowledge that Joe Biden is president-elect.
As Paul Kane and Scott Clement report:

Just [25] congressional Republicans acknowledge Joe Biden's win over President Trump a month after the former vice president's clear victory of more than 7 million votes nationally and a convincing electoral-vote margin that exactly matched Trump's 2016 tally.
Two Republicans consider Trump the winner despite all evidence showing otherwise. And another 220 GOP members of the House and Senate — about 88 percent of all Republicans serving in Congress — will simply not say who won the election. . . .
The results demonstrate the fear that most Republicans have of the outgoing president and his grip on the party . . . 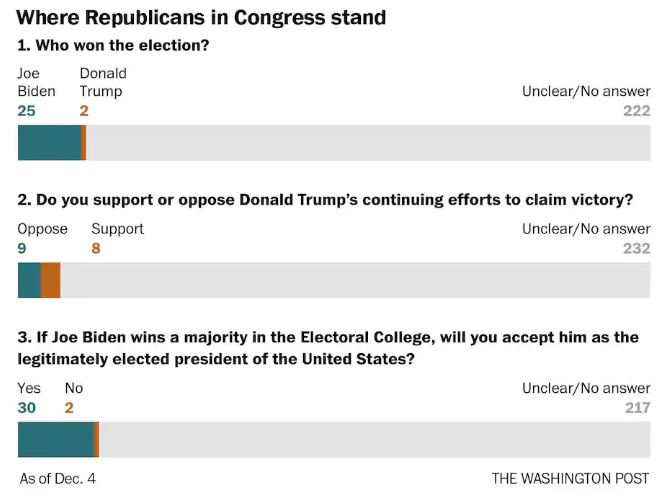 “We thank you Lord for our president and we pray for him. Because he has stood up before this nation and he has said that his perhaps single greatest accomplishment — and we know Lord God the long list of accomplishments ... [is] exposing and correcting the fraud” pic.twitter.com/hnls1ThvBK

Well, the preacher kept right on saying that all I had to do was send
Ten dollars to the church of the Sacred Bleeding Heart Of Jesus
Located somewhere in Los Angeles, California,
And next week they'd say my prayer on the radio
And all my dreams would come true
So I did . . . 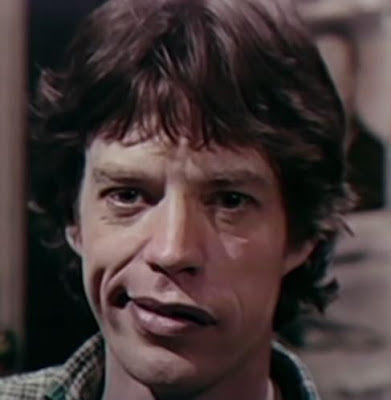