Trump Openly Calls For Judges & Legislators To Commit Sedition: "Life Will Be Much Easier For This Country"; Cheers Record Number Of COVID Cases ("Terrific!"); Deliberately Ordered Too Few Vaccines Months Ago And Now Cannot Order More 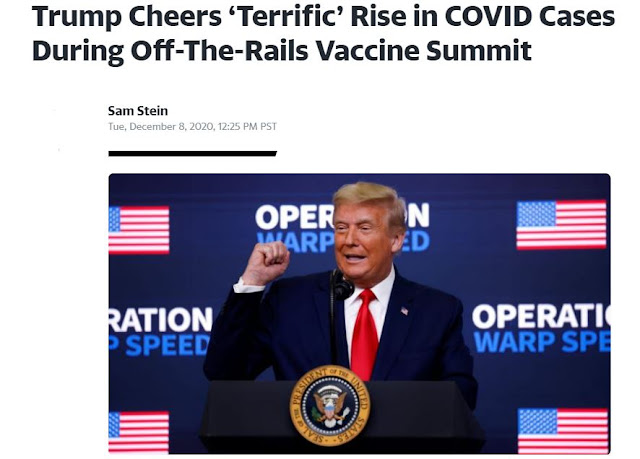 Donald Trump announced today that it's "terrific" that so many Americans have gotten the coronavirus.
With the number of cases at roughly 15,600,000 and climbing (and don't forget the 293,000 corpses), things just keep getting better and better.

Trump on the percentage of Americans who had contracted coronavirus: "I hear we're close to 15 percent. I'm hearing that, and that's terrific."

(The idea is that we're approaching herd immunity.) pic.twitter.com/VcXXM3iu3M

President Donald Trump made yet another symbolic effort Tuesday to combat coronavirus -- even as cases continue to rise and administration officials have admitted that the White House missed an opportunity to acquire more vaccine doses.

On Tuesday, the President signed a largely symbolic executive order aimed at prioritizing the shipment of the coronavirus vaccine to Americans before other nations. But the scope of enforcement for the order is unclear.

An administration official described Tuesday's event as a "publicity stunt" sought by Trump to take credit for the development of the vaccine. . . .

The White House coronavirus task force is warning states that current vaccination plans won't reduce the spread of the disease until at least the late spring.

"The current vaccine implementation will not substantially reduce viral spread, hospitalizations, or fatalities until the 100 million Americans with comorbidities can be fully immunized, which will take until the late spring. . . . Behavioral change and aggressive mitigation policies are the only widespread prevention tools that we have to address this winter surge." . . .

The official familiar with the situation confirmed that Trump administration officials passed up a chance to purchase more than the 100 million doses of Pfizer's vaccine it agreed to earlier this summer. . . .

Pfizer has told the Trump administration it cannot provide substantial additional doses of its coronavirus vaccine until late June or July because other countries have rushed to buy up most of its supply, according to multiple individuals familiar with the situation.
That means the U.S. government may not be able to ramp up as rapidly as it had expected from the 100 million doses of the Pfizer vaccine that it purchased earlier this year, raising questions about whether it can keep to its aggressive schedule to vaccinate most Americans by late spring or early summer.
Trump administration officials denied there would be availability issues in the second quarter, citing other vaccines in the pipeline . . . But several officials knowledgeable about the contracts said that supplies from other companies may be insufficient to fill the gap.
Last summer, Pfizer officials had urged Operation Warp Speed to purchase 200 million doses, or enough of the two-shot regimen for 100 million people, according to people knowledgeable about the issue who spoke on the condition of anonymity because they weren’t authorized to discuss the situation. But the Warp Speed officials declined, opting instead for 100 million doses, they said. . . .
It was only last weekend, with a Food and Drug Administration clearance expected any day, that federal officials reached back out to the company asking to buy another 100 million doses. By then, Pfizer said it had committed the supply elsewhere . . .
Pfizer said the company might be able to provide 50 million doses at the end of the second quarter, and another 50 million doses in the third quarter, the individuals said.

US 'shouldn't have closed the door' to more Pfizer Covid vaccine doses this past summer, official says | @Acosta & @maeganvaz https://t.co/n9hPMWpneR

I don't know why Trump would have declined to order enough vaccines from Pfizer last July but it wouldn't surprise me if the administration thought it was a waste of money because the president said the virus was going away.

trump awards the medal of freedom to covid 19 pic.twitter.com/338lsa0vaJ

it's sorta weird for Trump to take a coronavirus vaccine victory lap before, you know, hardly any Americans have been vaccinated https://t.co/2FqBT7qXI0

It's so weird to listen to Trump deliver a campaign-style speech when voters have already rejected his sales pitch pic.twitter.com/F34t9mgxJw

"the numbers should skyrocket downward" pic.twitter.com/06JRWqqcp7

Giving people the plague. Just what Jesus Christ would have wanted in his honor. https://t.co/KzSppe5NIj

Trump on the percentage of Americans who had contracted coronavirus: "I hear we're close to 15 percent. I'm hearing that, and that's terrific."

(The idea is that we're approaching herd immunity.) pic.twitter.com/VcXXM3iu3M

Giving people the plague. Just what Jesus Christ would have wanted in his honor. https://t.co/KzSppe5NIj

Trump calls for judges and Republican legislators to have the "courage" to help him overthrow the election, then says, "I'll tell you what, life will be much easier for this country." He then exits the White House event to cheers. pic.twitter.com/tb7QiskANf

Except they just agreed to hear Texas’s lawsuit which covers 4 states, including Pennsylvania

This is embarrassing. It’s worth bearing in mind that Texas AG Ken Paxton, who filed the suit, is under criminal investigation by the FBI after his own entire senior staff turned him in for corruption. Maybe he thinks disgracing himself further will win a pardon. https://t.co/zmfwTeLcRl