Had a love affair, but it was only paper
Had a lot of fun, could have been a lot better . . .
Even though it was never, it was never written down
Still might be a chance that it might work out . . .

Because I'm bored, here's a collage of Kayleigh Mcenany holding up paper. pic.twitter.com/ZUjJvZh2PA

Hannity just featured another episode of Trumpers owning the libs with reams of paper pic.twitter.com/lniNN5GWnJ

$10 say those binders are full of blank pagespic.twitter.com/9AYDOYxFNN

Kayleigh will be lugging out a huge binder filled with blank sheets of paper and call it evidence. 🙄 pic.twitter.com/wc2OwvfeDL

Despite being completely ineffective, you gotta give it up to Kayleigh for sticking with the “waving around big stacks of blank paper to prove a point” bit. https://t.co/B1jps6RBrd

Watch: @kayleighmcenany slams CNN for claiming a pile of affidavits she showed on Fox News were “blank pieces of paper.” pic.twitter.com/k7PWsp7VqR

A case study in ruining yourself for trump.
pic.twitter.com/pFWoRpH2Di

Here she goes again! 😂@kayleighmcenany, the @PressSec lying on @seanhannity about “234 pages of sworn affidavits” which prove “voter fraud”.
One small hiccup, tho, the Trump lawyer admitted you something completely different in front of a judge..🤣😂🤣 pic.twitter.com/tJPTLY1nxM

Guess who’s back on Fox to hold up paper pic.twitter.com/kriV5L9lOK

Kayleigh has brandished multiple props in this one interview pic.twitter.com/fWXUUX3wOs

I think Joe Biden is screwed...Kayleigh McEnany is on Hannity and she just whipped out a piece of paper with circles on it pic.twitter.com/xxCUufNkus

You know, I really wasn’t convinced about this rigged election stuff until Kayleigh McEnany waved around this binder of papers just now. Who can argue with that? pic.twitter.com/qwfb3U59ee 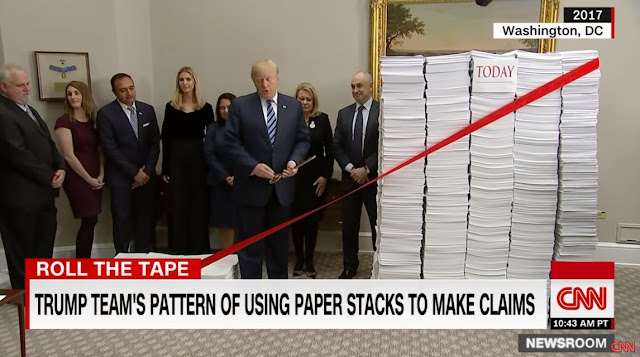 My favorite photo of the year is in order to make Donald Trump look busy the White House photographers had to have him sign blank sheets of paper so that it could look like he was working pic.twitter.com/7ADzmxNaCZ

Barr should try this move: https://t.co/uYihejqWYS

When a photo has SO MUCH more meaning! pic.twitter.com/fPVbHq3JWe