On The Two-Month Anniversary Of Fox Lawyers Telling A Judge Tucker Carlson Cannot Be Sued For Libel Because His News Show Contains No Truth, Sean Hannity Admits He Never Verifies Info Before Reporting It; Hannity Also Suggests Trump Pardon His Whole Family (Which Is SOP When You Have Not Committed Any Crimes) 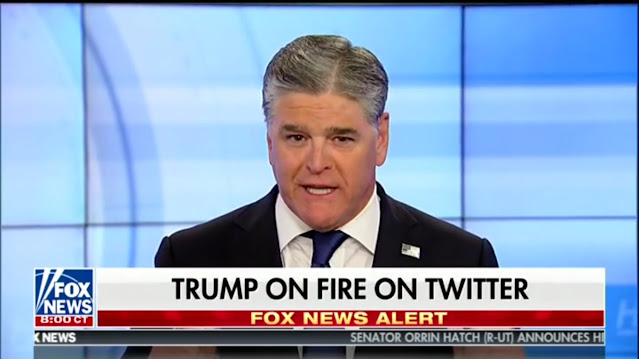 So that we’re clear, the guy whose entire identity is predicated on *his* show being real and every *other* show being fake... admitted on air that he doesn’t actually vet anything he says. https://t.co/tN67yYni8z

we worked on this story for over a decade and he just blurted it out https://t.co/vgJB8yhfP7

Sean Hannity is the Scott Atlas of Sean Hannitys https://t.co/gsbBnqcaYe

You can’t make this up.

Lawyers for Fox News’s own @TuckerCarlson argued his client cannot be sued for slander because his show is well known to be Fake News. The NY Judge agreed.

Donald Trump Should Pardon His Entire Family (And Himself) Before Leaving The White House . . . Because They Have Not Committed Any Crimes

Sean Hannity: "The president out the door needs to pardon his whole family and himself, because they want this witch hunt to go on in perpetuity ... he should be able to pardon anybody that he wants to" pic.twitter.com/DkbApzxb6d

So even @seanhannity agrees Trump and his whole family are criminals. Finally. https://t.co/KX07CTTOK5

You pardon people who have COMMITTED crimes. So what crimes are you saying the Entire Trump Family that they will require a pardon!?!?

Fox News host didn't specify what criminal charges the Trumps could be up against. https://t.co/8jSVNS4ckT

Pardon whomever he wants - that means they will not be able to plead the 5th if they are testifying under oath in front of Congress. It also would not protect them from State charges. So go ahead - pardon away, but don't whine when you end up in jail anyway.

Hannity attempts to distance himself from comments he made earlier in the broadcast pic.twitter.com/mDxOJhwbom

I shit you not Tucker just did a UFO segment on The Monolith. pic.twitter.com/ZCuIjIE4na

its just funny to me that these are the same people that love to push home schooling pic.twitter.com/PHT6qAfO2D

Sidney Powell, until recently one of President Trump’s lawyers, shared with her followers a request that Trump cancel the election he just lost, cancel Biden’s inauguration and instituted a “military commission” to investigate everything. pic.twitter.com/jJg0W0Hda9

Guess who’s back on Fox to hold up paper pic.twitter.com/kriV5L9lOK

Why do they all sound like they are giving a book report on the book they didn’t read? pic.twitter.com/gL2PIu2c5S

The vast majority of Fox News's programming today has been scolding the media for not being hard enough on Biden pic.twitter.com/MAx0DanzvI