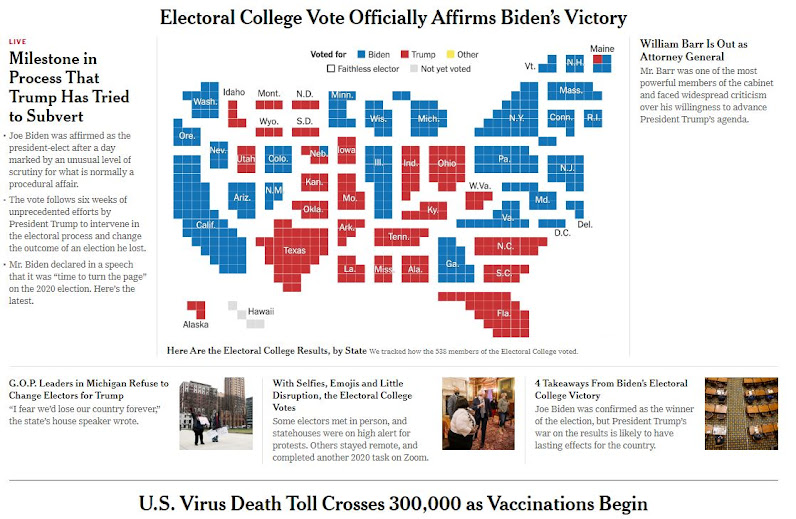 Sen. Kevin Cramer (R-N.D.) was asked if now, after all of the members of the Electoral College have formally cast their votes for Joe Biden, in accordance with the will of the voters in each state, Joe Biden is the President-Elect?

Well, it seems to me that being elected by the Electoral College is a threshold where a title like that is probably most appropriate and it's — I suppose you can say official, if there is such a thing as official president-elect, or anything else-elect. And there's an inauguration that will swear somebody in and that person will be the president of the United States, but whether you call it that or not, you know, there are legal challenges that are ongoing — not very many — probably not a remedy that would change the outcome but, so, I don't — again, I don’t know how a politician refers to another politician, but it does look to me like the big race is really between the inaugural committee and the Justice Department at this point, so we'll see how the emails turn out.

The judges would also have accepted: "Yes."

The Washington Post reports that Donald Trump "continues to tweet grievances about the election, which he claimed Sunday is 'under protest'". (lol)

Here's Newsmax host Greg Kelly downplaying the Electoral College electing Joe Biden, saying "it was all virtual because of Covid" -- even as video playing right next to him shows electors meeting in person pic.twitter.com/VLRhLAIigX

President Trump said that Attorney General William Barr would depart next week. Barr had in recent weeks fallen out of favor with the president after acknowledging that the Justice Department had found no widespread voter fraud. https://t.co/Ywrp6TAYit