"Dead People, Landscaping, And Pornography:
It's Hard To Know What Counts As A Fuckup When You Work For Donald Trump"

It was November 7, and the president — on the verge of Electoral College defeat, with the whole country glued to cable news . . . — had been pissed for four consecutive days. . . .
[Trump's] mood is often sour, but multiple White House officials told me things were so volatile after Election Day that they were outright avoiding the president out of concern he might end up using any nearby staffer as a human stress ball. . . . On Election Night, [a senior White House official] said, they walked into the residence, saw the president screaming, then turned around and walked right back out. . . .
Scheduling surprises had been Trump's style from the earliest days of his first campaign, after all, and no half-conscious person who worked for him for longer than a day could maintain the belief that the operation would ever achieve or even aspire to orderliness. . . .
Trump followed up his announcement with a second announcement. Rather than the Four Seasons hotel, the press conference would be held at Four Seasons Total Landscaping — on State Road, in an industrial patch of Northeast Philadelphia, near an interstate and a few doors down from the Fantasy Island Adult Book Store and across the street from a crematorium. If you hit the Pentecostal church, you've gone too far. . . .
It's hard to know what counts as a fuckup when you work for Donald Trump. Looked at by the standards of a traditional campaign with a traditional candidate who possesses a minor-to-moderate capacity for traditional human feelings, like shame, what happened at Four Seasons Total Landscaping, or the fact that it happened at all, was a disaster. . . .
In setting and content, the event served for some campaign officials and presidential advisers as a representation of the brokenness of Trumpworld. . . . A proper advance team, for instance, would have gone to scope things out before securing the location, taking note of nearby landmarks like the porn shop and the crematorium. . . .
In the weeks leading up to that Saturday morning, advisers to Trump believed Rudy Giuliani was becoming more and more of a problem. He'd always been a problem, it was true, prone to butt-dialing reporters, or showing up on TV all out of sorts to divulge something at odds with what the president had already claimed to be true, or otherwise catching the attention of hostile foreign governments or domestic investigators or celebrity pranksters.
But in the final sprint to Election Day, managing the known unknowns of Giuliani's endless capacity to fuck up so much . . . was consuming time and manpower at campaign headquarters when there was little left to spare. "We were spending hours each day trying to prevent Rudy from creating a disaster," a senior campaign official said. "Hours and hours."

People who were supposed to be focused on winning a presidential race were instead focused on devising ways to distract the once celebrated mayor of New York City. In the office he was a nuisance, but out of sight he was a terror. To keep him busy but accounted for, he was sent on the road as a surrogate, including for a last-minute event in Philadelphia on Columbus Day to launch an otherwise basically fake initiative called Italian Americans for Trump. . . .
[After the election, there were] competing power centers, with the litigators and other serious people on the one side, who realized almost immediately that the president had no legitimate pathway to change the election results, and the conspiracy theorists and crazy people, led by Giuliani, on the other side. The second group won, even after multiple interventions staged by lawyers and family members and other advisers. . . .
What came out of the president's mouth, and through his Twitter feed, seemed a reflection of what went into his head via people like Powell, Giuliani, and fellow legal-team member Jenna Ellis. . . . Trump spent even more time on the phone, dialing up whomever he saw defending him most rabidly on TV. . . .

[Daryl] Brooks describes himself as an activist, but it's more true to say that he's a man in search of a movement. . . . "He was basically a kook and a political menace," Reed Gusciora, the mayor of Trenton, said. "So he fit in really well with Giuliani." And then, suddenly, there he was: the first witness called by Giuliani to address the cameras at Four Seasons Total Landscaping. . . . After the press conference, Politico reported that he had served time more than two decades ago after being convicted of exposing himself to a minor . . .
"This is all very us," another campaign official said. "I'm not shocked or surprised at all." If luck is what happens when preparation meets opportunity, this was the opposite. "That's how you get the Four Seasons fucking Total Landscaping bullshit." . . .

[S]orting out the truth is a complicated endeavor when it relates to Donald Trump. Everyone involved in anything, no matter the size, no matter how stupid, seems to lie as a first resort, or to know very little, or to lie about knowing very little, or to know just enough to send blame in another direction, and the person in that direction seems to lie also, or to know very little, or to lie about knowing very little, but perhaps they have a theory that sends blame someplace else, and over there, too, you will find more liars, more know-nothings, and before long, a whole month will have passed, and you still haven't filed your story about how the president's attorney wound up undermining democracy in a parking lot off I-95 on a strip of cracked pavement in a run-down part of a city that ordinarily would command no consideration from the national political class or the very online public or the equally online mainstream media, which, when forced to look, found lots of reason to laugh.

That Saturday morning, D'Angelo said . . . "[W]e looked out and found it was Giuliani who made a big mistake." He laughed hard. "He was at the wrong Four Seasons hotel, the wrong one!" He paused to laugh with every few words. "'Cause that's a … landscaping! … And not a hotel! … A five-star hotel! … And that's … one-star … landscaping!" He could barely breathe. "So you've got dead people, landscaping, and pornography!" . . .

As one Philadelphia Republican official told me: "Duuuuuude! It's sooooo embarrassing! Oh my God! It's the height of idiocy!" 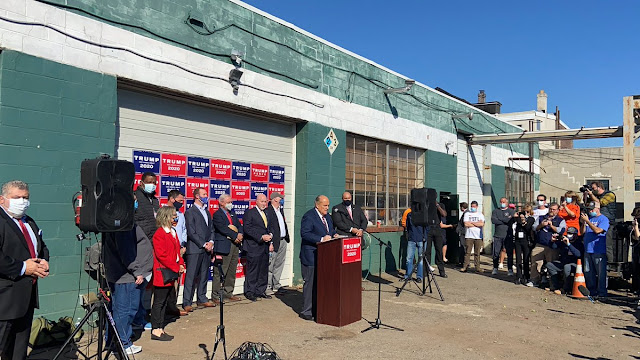 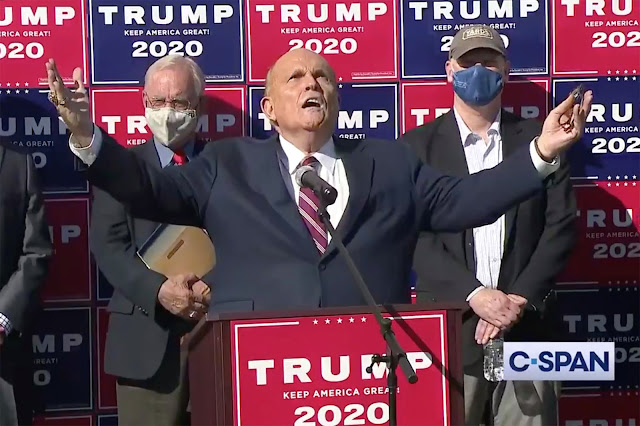 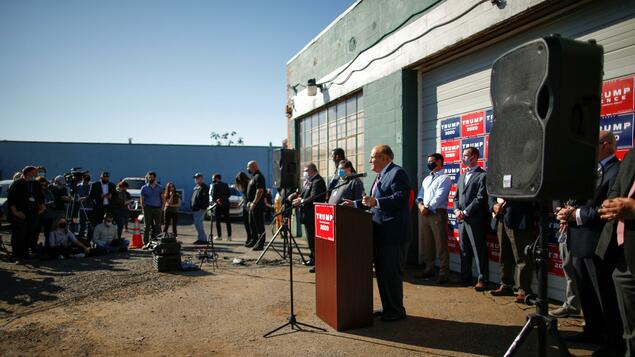 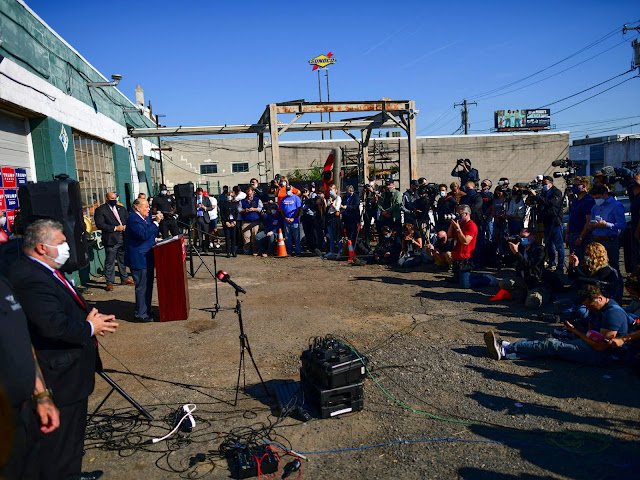 Here’s the “all the networks” moment pic.twitter.com/j9UFzme4DE

On the one hand, yes, it seems hypothetically possible that U.S. government officials could maintain a vast conspiracy, execute it perfectly, and keep the conspiracy secret from the America public.

On the other hand, Four Seasons Total Landscaping. pic.twitter.com/dT8YZTsZmE 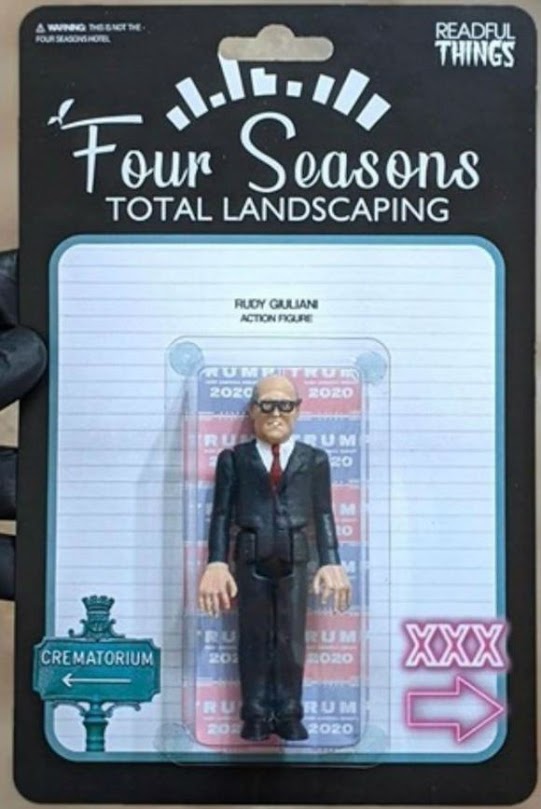 yesterday's fucking clown show will never stop being funny to me. on my deathbed, I'm going to be giggling and mumbling "Four Seasons Total Landscaping"