Supreme Court Rejects Trump's "Big" Lawsuit "With Unusual Speed" (1-57);
Pascrell Says 126 Republicans Violated 14th Amendment By Attempting To Install An Unelected Dictator And They Should Not Be Allowed A Seat In US Government

After being laughed out of court 56 times since Election Day, Donald Trump went all in on "the big one [that] everyone has been waiting for", the claim that the Supreme Court would accept "to save our Country". Maybe someone who went bankrupt running a casino shouldn't be rolling the dice like that.
Legal experts had described the claim as "laughable" and "utter garbage" and the Supreme Court agreed. They acted "with unusual speed" and shot down "the big one" in its totality. (#57!)

Texas has not demonstrated a judicially cognizable interest in the manner in which another State conducts its elections. All other pending motions are dismissed as moot.

Or, in laymen's terms, uttered with a dismissive hand gesture:

Get the fuck outta here!

7 justices deny for lack of standing.
2 Would grant motion for petition but deny relief.

No justice sides with TX/Trump.

None of the nine justices, including the three appointed by Trump, ruled in favour of granting relief.
This particular failure also exposed 126 Republicans lawmakers as ardent enemies of democracy. These elected officials should be forever remembered for their seditious acts. Imagine them all stamped Scarlet-Letter-style with an orange "T" on their foreheads. No one should ever listen to anything any of them says from this moment forward.
New Jersey Rep. Bill Pascrell has called on House leaders to refuse to seat any of the 126 signatories to the Covenant of Sedition because they aggressively sought "to overturn the election" and install Trump as "an unelected dictator".

Today I’m calling on House leaders to refuse to seat any Members trying to overturn the election and make donald trump an unelected dictator. pic.twitter.com/icTmGKCpuR

Pascrell cites Section II of the Fourteenth Amendment which disqualifies any individuals who seek to attack American democracy (Congress can also exclude members by a majority vote, as acknowledged by the US Supreme Court in Powell v. McCormack):

No person shall be a Senator or Representative in Congress, or elector of President and Vice President, or hold any office, civil or military, under the United States, or under any State, who, having previously taken an oath, as a member of Congress, or as an officer of the United States, or as a member of any State legislature, or as an executive or judicial officer of any State, to support the Constitution of the United States, shall have engaged in insurrection or rebellion against the same, or given aid or comfort to the enemies thereof. But Congress may by a vote of two-thirds of each House, remove such disability.

The text of the 14th Amendment expressly forbids Members of Congress from engaging in rebellion against the United States. Trying to overturn a democratic election and install a dictator seems like a pretty clear example of that. pic.twitter.com/VMnDfd0sFx

In his letter to House Speaker Nancy Pelosi and House Administration Chairwomen Zoe Lofgren, Pascrell states the Fourteenth Amendment "was written to prevent the destruction of the United States from without and within". These 126 Republicans have violated "the text and spirit of the Constitution" by attempting to "tear the United States government apart", to "demolish democracy" by "invalidating the clear results of the 2020 election". All of these Members-elect have supported, in a filing with the Supreme Court, installing an unelected dictator. They do not support the United States and its system of democracy and none of them should be permitted a seat in the 117th Congress.

Section 3 of the 14th Amendment was written after the Civil War to bar from government any traitors who would seek to destroy the Union.

My letter to House leadership today demands that 126 Republicans (and counting) are violating the Constitution. pic.twitter.com/4ti0OU1kpP 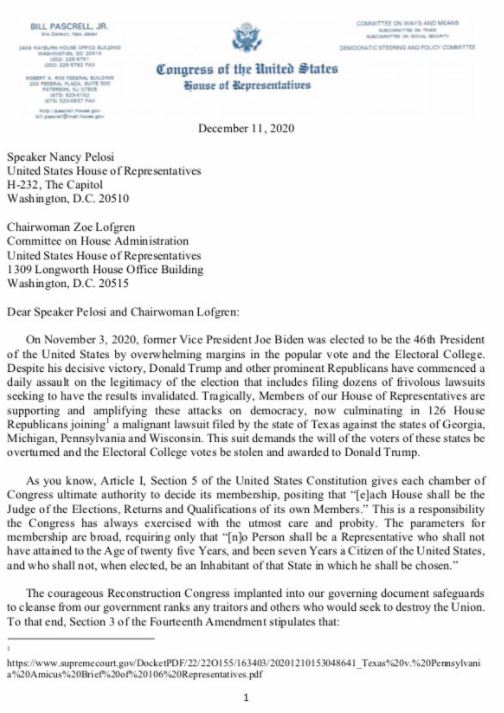 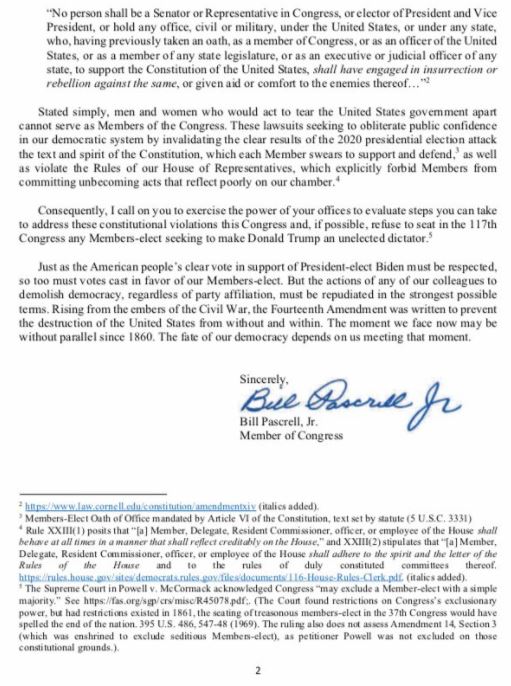 Number of House Republicans who signed onto Trump lawsuit: 126

Words it took Supreme Court to reject the case: 126 pic.twitter.com/9gtqJm0vVN

Things are a little heated on Parler .... pic.twitter.com/xajBsWX49S

So Parler delivering with lots of calls to murder the judges on the supreme court. pic.twitter.com/Wbrxyqsszq

Trolling the MAGA's on Parler to H8TE on the GOP RINO's and blaming Perdue and Loeffler for not doing enough, is too EZ!!!!! And yes, lot of them want "succession" (secession) from the union. #SupremeLoserTrump pic.twitter.com/nDlwXVNLDM

How does anyone even read Parler? It's fucking insane lol. pic.twitter.com/NVcIsgw10Q

Devin Nunes is over on Parler, denying he has Covid but admitting he has the anti-bodies, as if you can have one without the other. pic.twitter.com/ifQ6oUW7UJ