Trump Ordered A Limited Number Of Vaccines (Pfizer Offered To Sell More, Trump Said "No"); He Has Also Not Attended A Virus Task Force Meeting In Six Months, But Will Star Tomorrow In A Vaccine PR Extravaganza, Taking Credit For Work Done To Stop A Virus He Denied Existed 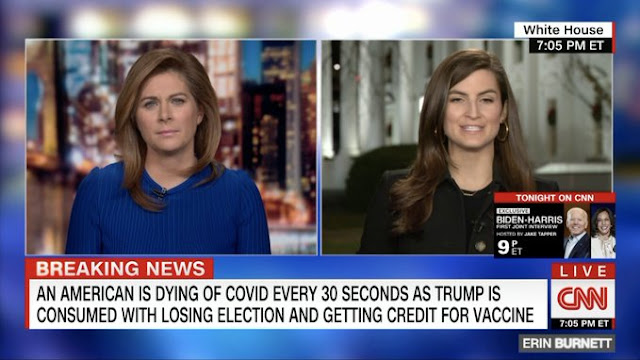 "I wanted to always play [the coronavirus]
down. I still like playing it down."
December 2

"It's the Trump vaccine" pic.twitter.com/MTFff7sQfk

I’m told Trump is furious at what he thinks is Bush, Clinton, and Obama attempting to take away credit for “his vaccine.”

He’s being urged not to tweet anything petulant about it, so I’m sure petulance is imminent.

NEW: The summit has been largely viewed by officials as a public relations show designed to allow the president to take credit for the development and production of a COVID-19 vaccine.https://t.co/uCDoIeXrtD

Donald Trump will host a "Covid-19 Vaccine Summit" on Tuesday — a bullshit public relations stunt and photo op, making himself the center of attention of vaccine research and development.
Trump was first informed of the virus and its extreme severity nearly one year ago, but he never proposed a plan for the US to deal with the outbreak. Back in February, Trump said the country's 15 cases would "within a few days" be down to zero. The US has experienced over 15 million cases and at least 290,000 deaths (and possibly as many as 350,000).
New cases and daily deaths have been rising for week and are now higher than ever and hospitals in many states are at capacity. Last week included four days with new cases totaling over 200,000 per day, including near a quarter-million last Friday.
Trump has not attended a meeting of the White House Coronavirus Task force in at least six months. During his rallies in the final days before the election, the only time he mentioned the virus was to whine about how unfair it was that the skyrocketing number of cases and deaths were getting so much coverage on cable news. He told the maskless crowds that it was a multi-faceted plot to deny him a second term.
It was reported today that the Trump administration ordered only a limited number of vaccine doses. (Just like he sat on his ass while people died and waited several months before ordering the most basic PPE for struggling hospitals this past spring.) Pfizer offered to sell more doses, but Trump said "No, thanks." The US may not have adequate numbers of vaccines until next June, at the earliest.

Breaking News: Trump administration officials passed when Pfizer offered in the summer to sell the U.S. more coronavirus vaccine doses, people familiar with the matter said. Now Pfizer may not be able to provide more doses to the U.S. until next June.https://t.co/aGhcHoa9F3

Industry officials familiar with plans for the summit interpreted it as an opportunity for the White House to pressure the FDA to quickly issue emergency authorizations for the first two vaccines candidates to be reviewed — one developed by the partnership of Pfizer and BioNTech and the other developed by Moderna — as well as to ensure Trump receives credit for the breakneck pace of vaccine development to take place under his watch. . . .
Some executives are irritated at pressure from the White House to attend an event they perceive to be largely political, according to representatives from several of the companies invited . . .
The event will come roughly six weeks before Trump is set to leave the White House. . . .
In recent months, [Trump] has suggested that the FDA is part of a "deep state" plot and that Pfizer, the company that will likely be first to distribute and administer its vaccine, intentionally delayed release of clinical trial data to harm his reelection odds. . . .
"I came up with vaccines that people didn't think we'd have for five years," Trump said Sunday in a Fox News interview.

NEWS -- Senate Republicans have invited a leading anti-vaxxer to be the lead witness at a Homeland Security committee hearing on Tuesday at a time when the US is preparing the largest-ever vaccination campaign to fight Covid. From @SherylNYT https://t.co/ISdrVoOXV6

Did anyone really believe Trump would get this right? https://t.co/cRoOggVVKM

When the White House announced on Tuesday that President Donald Trump would be hosting a summit to spotlight the progress on a COVID-19 vaccine summit, it came as news to many of the stakeholders involved in the vaccine production process.

According to three individuals familiar with the matter, including senior administration officials working on the federal government's coronavirus response, key members of the White House's coronavirus task force and top representatives of the pharmaceutical industry were unaware of the event before it became public. . . .

[T]he process by which [the event] came together caught several individuals off guard, underscoring for them once more that the Trump White House is more concerned with the pomp and presentation of the COVID fight than the fight itself.

According to two other senior administration officials, the summit appears to have been planned at the last minute and has been largely viewed by officials working on the administration’s vaccine efforts as a public relations show designed to allow the president to take credit for the development and production of a COVID-19 vaccine. Officials said they expect the event to be largely political, with representatives of each industry feeling compelled to take time to thank the president for the vaccine development efforts that he's delegated to others . . .

When asked if they would be required to attend the summit next week, one senior official working with the White House coronavirus task force said: "I hope not." . . .

Officials note that the vaccine summit could come off as overly celebratory at a time when coronavirus cases, hospitalizations, and related deaths are sweeping the country. On Wednesday the U.S. recorded the highest number of COVID-19 deaths—2,804—since the pandemic began, according to data collected by Johns Hopkins University. Already, the White House has planned dozens of holiday parties for the upcoming weeks, where mask wearing will be encouraged but not required, despite internal administration warnings that Americans should not congregate for such gatherings.

CDC Director Robert Redfield said Tuesday during a U.S. Chamber of Commerce event that the U.S. . . . could see as many as 200,000 additional deaths over the next several months. . . .

According to a recent report by Axios, White House chief of staff Mark Meadows called FDA Commissioner Stephen Hahn to the White House this week to talk about why the agency had not moved faster to authorize the vaccine. . . .

I know this sounds improbable & preposterous ...... but you know it'll possibly/probably/definitely happen !

How long until Dump claims Joe Biden "killed" half a Million Americans ?

Or perhaps it will take the lying form of :

Joe killed far more people than I ever did !