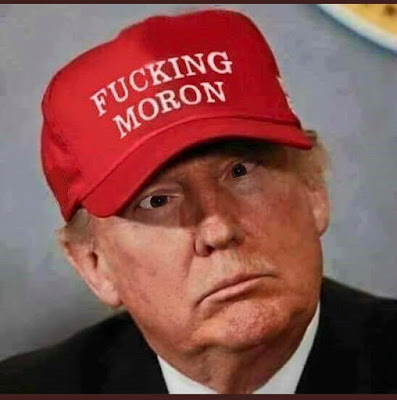 Donald Trump loves to "flood the zone with shit". Sometimes it's calculated, to distract attention from real and serious crimes. At other times, it's unintentional and happens simply because Trump is a colossal moron who is also mentally ill and possibly suffering from some form of dementia.

How deep is the flood of shit that Trump makes the American people wade through?

Remember Dr. Stella Immanuel? She runs Rehoboth Medical Services in Houston, Texas, which is close to her church, Firepower Ministries. She caught the attention of Donald Trumps Sr. and Jr., who both shared her tweets and videos.

Dr. Immanuel believes impotence, infertility, and miscarriages are caused by people having sex in their dreams with evil spirits and being inseminated with demon semen, scientists are developing a vaccine to destroy a gene in the brain that makes people become religious, a witch is using abortion and gay marriage to destroy the world, doctors use DNA from space aliens as a medical treatment, and "reptilians" run parts of the US government (she claims to have spoken with a "half-human, half-E.T." spirit). She says she has cured hundreds of people of COVID-19 and she "double dog dared" CNN anchors and Dr. Fauci to provide urine samples to prove they weren't taking hydroxychloroquine (Fauci's downplaying the drug's effectiveness to hurt Trump's chances of re-election). She warned that Jesus Christ would destroy Facebook if her deleted videos were not restored.

The President of the United States defended Dr. Immanuel to the nation in a press conference: "I thought she was very impressive ... she said that she's had tremendous success with hundreds of different patients, and I thought her voice was an important voice."

All that happened roughly one month ago. Trump shared Dr. Immanuel's video on July 27 and the story blew up over the next two days.) Not even five weeks later, most of us have forgotten all about it.

In earlier, more simple times, a president publicly associating himself with these crackpot beliefs would be something he would be helpless to shake. It would be a constant punchline, something he would be ridiculed about for the rest of his life. But it turns out you can escape that fate if you commit a boneheaded, once-in-a-presidency gaffe a few times every single week for four years.
Posted by allan at 12:34 AM