Trump Says His Military Comments (Confirmed By The Atlantic, WaPo, NYT, AP, Fox News & His Own Dept. of Defense) Is A "Hoax" And "A Witch Hunt"; He Also Offers Some Thoughts On India: "It Is Definitely Big. It's Definitely Big." 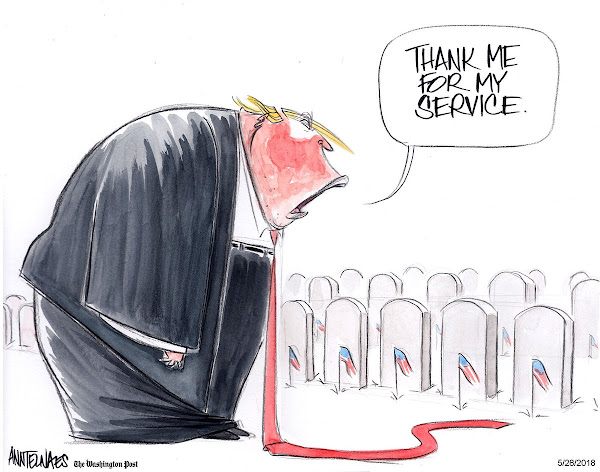 Trump: "Speaking of politics, I think North Carolina, Michigan, and Pennsylvania, and other states, the Democrat governors should open the states. They'll open them on November 4th, but they should open them now." pic.twitter.com/UkbHX9aYf4

LOL. After a bizarre aside about "central casting" college football coaches, Trump announces that Lou Holtz will be receiving the Presidential Medal of Freedom. pic.twitter.com/ElLjMjXsoF

Asked About A Poisoning In Russia, Putin's Puppet Changes Subject To North Korea And Hillary Clinton

Trump on what he might do about the poisoning of Putin opponent Alexei Navalny: "If Hillary got elected, you would be at war with North Korea." pic.twitter.com/pqKKCBGa0o

Asked About A Poisoning In Russia, Putin's Puppet Changes Subject To China

"It is interesting that everybody is always mentioning Russia ... but I think China probably at this point is a nation you should be talking about" -- Trump responds to a question about the Navalny poisoning pic.twitter.com/c460n6kGbN

Trump on Navalny Poisoning: I think it’s tragic, it’s terrible, it shouldn’t happen. We haven’t had any proof yet... It is interesting that everyone is always mentioning Russia... pic.twitter.com/ymQeQzTdzC

Because As Recent Events Have Made Clear, Putin Simply Loves People Who Are Very Tough On Him

"But I do get along with President Putin. But I've been tougher on Russia than anybody else by far." -- Trump is totally incoherent pic.twitter.com/k5CqY3t3LY

Trump on if he regrets his 2015 comments that John McCain is only a war hero because he was captured: "I say what I say ... I disagreed with him on a lot of things. Time has proven me right, to a large extent." pic.twitter.com/pmYk8ZzCvf

"We're at about 180" -- Trump undercounts the US coronavirus death toll by about 7,000 people while downplaying models showing that tens of thousands of Americans will die between now and the end of the year pic.twitter.com/XFEvao6fgT

"Because of all these tests, we have far more cases" -- Trump still has no clue how coronavirus testing works pic.twitter.com/misErQ1t7h

Trump murders irony by criticizing Cuomo for incompetent handling of the coronavirus pic.twitter.com/0zKuznYYcj

"It's a hoax" -- Trump on The Atlantic's report about him disparaging fallen American soldiers that has since been corroborated by Fox News pic.twitter.com/5AMY8Vuq5Y

Trump insists the the sources for The Atlantic's story are either made up or disgruntled ex-staffers. Choose your adventure. pic.twitter.com/3PPvXaZIGE

Trump demeans John Kelly while a reporter tries to ask him whether it's true that he disparaged American soldiers during a visit to his son's grave pic.twitter.com/HSgSTcuTyZ

the military guy is a loser but I would never call the military losers https://t.co/TdvbBUL8X8

Trump is again denying the Atlantic report. He is now criticizing John Kelly, his former homeland security secretary and chief of staff, as exhausted and unable to handle pressure.

The President says The Atlantic Story is a continuation of the Witch Hunt pic.twitter.com/9d2edxPHXf

"It's disgraceful. So I want to thank you all very much" -- Trump concludes the press conference by laying into reporters, then immediately thanking them 🙃 pic.twitter.com/NhIihUhqOn

Trump analyzing Kosovo and Serbia in the Oval Office says "there was a lot of fighting and now there's a lot of love."