Trump Was Asked Who Might Have Poisoned Russian Alexey Navalny:
"Uhhh, We'll Talk About That At Another Time. . . . I Like Putin. He Likes Me." 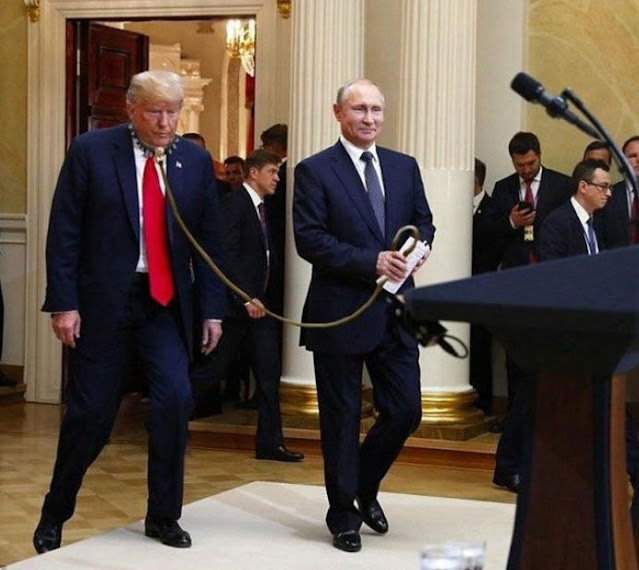 In less than seven months, at least 205,000 Americans have died from a virus that Donald Trump first learned about in November 2019. Ten months have passed and Trump has absolutely nothing of consequence to fight back. He's been the best host a virus could ask for.
(When "The Invisible Enemy" knocked on the door, Trump invited it in, gave it a tour of the house, and cooked it a full dinner. Over a couple bottles of bleach wine, Trump tells the virus it's "brilliant", "tough and smart", and a "genius". Trump is now suggesting after-dinner liqueurs and hoping to show off his record collection.)
Today, Trump said the virus "affects virtually nobody".
In August 2019, Trump's Department of Health & Human Services finished up an eight-month drill which had involved numerous agencies and groups (the Pentagon, the Department of Veterans Affairs, the National Security Council, the American Red Cross, the American Nurses Association, the mayo Clinic, and major hospitals and health insurance companies) and 12 states across the country.
"Crimson Contagion" was meant to gauge the readiness and effectiveness of the US government if a highly-contagious and deadly virus from China were to spread through the United States.
The draft report on Crimson Contagion was finalized in October 2019. The very next month, the Trump administration received its first warnings that a virus that matched the drill's scenario exactly was likely happening. And still Trump and his minions did nothing for four months before reluctantly announcing a national emergency. (The story on this drill was made public six days later, on March 19, 2020.)
Since then, Trump's every decision has made the problem worse, causing tens of thousands of additional Americans to become sick and die. And we know now that nearly all of Trump's deadly decisions were intentional, made with the full knowledge that they would result in mass death.
In early August 2020, Trump insisted that he had made no mistakes (not even one) during the pandemic and would do nothing different if given the chance.

"It affects virtually nobody," Trump says of the coronavirus, which has now killed 200,000 Americans and counting pic.twitter.com/qHrZvUWNhX

“In a stunning departure from reality, President Trump is giving himself the best possible grade for his handling of the coronavirus.” - @Acosta pic.twitter.com/JeiltvrxPF

The president is making things up again. https://t.co/416ruyBkwr

Trump Will Talk Shit About Everyone . . . But Not Putin

Trump is not allowed to criticize Putin. https://t.co/EA2d4HwoVB

Q: Who do you think poisoned Alexey Navalny in Russia?

TRUMP: Uhhhh ... we'll talk about that at another time. pic.twitter.com/WSgyjuwN54

Navalny was poisoned with Novichok, which was confirmed by America’s European allies. Pompeo said there’s a “substantial chance” senior Russian officials are behind Navalny’s poisoning. But Trump refuses to say anything about it except that he’ll talk about it some other time. https://t.co/FVKrdElAZ1

Not a single soul:

Totally precious how the press keeps trying to give him an opportunity to be human. https://t.co/Am2YDwDZ41

Trump accuses Joe Biden of being a communist pic.twitter.com/ABFxjWpoPs

The President suggests Elizabeth Warren is a communist pic.twitter.com/1acPqFQEz5

"We have F-35s that you can't see," Trump says, seemingly still confused about the fact that stealth planes aren't literally invisible pic.twitter.com/lsjnoHnt8x

"It's hydrosonic. I call it super-duper." (There are hypersonic missiles but I'm not aware of "hydrosonic" missiles) pic.twitter.com/8KdQL0h4nJ

"Blood in the sand" -- drink! pic.twitter.com/khgtdT5pFR

The President says he has inquired about manipulating US currency pic.twitter.com/DHk4u6EiP0

It’s pretty amazing that in a monologue that contains the words “super-duper” twice, super-duper isn’t even the top 3 dumbest thing he says. https://t.co/nx9T5PEgKj

"I'm so angry at Republicans. I am so angry ... they spied on my campaign, we caught 'em. And by the way, that's Biden, that's Obama ... it's treason." -- Trump pic.twitter.com/AHDkYYkwcR

The President simultaneously demonstrates he doesn’t know how tariffs work while claiming Joe Biden doesn’t know what tariffs are pic.twitter.com/G1ZuusfL19

Trump tells an unending story about why steam power is better than electric power for big military ships. pic.twitter.com/7TMCBIAHG0

lol. 2:20 is the longest clip length allowed by Twitter!

Trump: It’s not that he wants to crush America but he will out of gross incompetence pic.twitter.com/hD1DGWsknb

They can just replay this one. Its all the same fucking nonsense.

I am still amazed that he continues to end these rallies with The Village People’s YMCA. Mind boggling.

The second ones are always a hoot. Pure stream of unconsciousness.

Slight correction: Trump is supposed to continue giving the same speech he's been giving for over 4 years, but at a different location.

Trump Brags To Crowd That The TVs In The Air Force One Bathrooms Are Awesome!

Trump is very impressed with the televisions in bathrooms in Air Force One pic.twitter.com/Au9hhW2TO1

Trump suggests that if Biden is elected, Cory Booker will destroy the suburbs. The racism is barely concealed. pic.twitter.com/V89Vlj3FKL

"I turn on NBC w/Lester Holt, another beauty, & they start w/a hurricane, & then they went to something...I'm saying, 'First Lady, this is getting a little embarrassing...they haven't mentioned the Nobel'"- Trump whines that NBC covered a hurricane instead of his Nobel nomination pic.twitter.com/C3jRDy5NH1

"Quite frankly it's embarrassing,” Woodward said in reaction to Trump giving himself an A+ on his handling of the virus https://t.co/fcL2ErhvYv pic.twitter.com/8DGCEn7uYH

They are literally trying to get even more people killed. I don't think there's any denying it at this point. https://t.co/0lqrmYJMNu

Trump says his SCOTUS appointment is important because of the "fake ballots" that will be sent out in the election. Again, total nonsense.

Trump is telling his usual false story about how it's rare that a president leaves office with "any" judicial vacancies (they regularly have dozens) and how Obama left him 142 (under 110, in significant part because of McConnell's obstruction strategy).

Trump repeats his usual evidence-free claim that Joe Biden is given questions for his news conferences. (I can't speak for every exchange Biden has had, but no proof of this about even one question at a news conference.)

"We're rounding the corner on the pandemic" (still in the tens of thousands of cases per day) "and we've done a phenomenal job, not just a good job...other than public relations, but that's because I have fake news" (no).

Trump is making up a story about how his political opponents are now, for political reasons, "hating the concept of having a vaccine."

Trump pronounces Kamala Harris's first name correctly, which he has not always done, then makes a point to note that he is doing so. "Like a comma, she said. Like a comma."

"This Is Their Latest Hoax"

"I don't know that she said that, or was that written out by Adam Schiff & Schumer & Pelosi? I would be more inclined for the second" -- Trump claims Schiff, Schumer, & Pelosi actually wrote RBG's dying statement, & suggests she'd actually be fine w/him nominating her replacement pic.twitter.com/xLQq1csNTz

With 200,000 now dead from Covid, Trump says; "We're rounding the corner on the pandemic. And we've done a phenomenal job. Not just a good job. Other than public relations, but that's because I have fake news. You can't convince them of anything. They're a fake ... we take an A+" pic.twitter.com/X0FJVyzbFI

Not watching but yes this Churchill thing is made up. Churchill went to rooftops to watch bombing but did not broadcast there, did not hold rooftop pressers, and did not tell people during the Blitz “everything is OK.”

Fox News is bravely covering the defining story of these troubled times pic.twitter.com/6NMZI5b6UX

From praise for the Confederacy to talk of "good genes" before a mostly white audience in Minnesota, Trump's weekend rallies featured many flavors of racism https://t.co/ztrQaGO8by

The Manhattan DA just told a court there's grounds to investigate Trump and his business for fraud -- and got very specific about which statutes:

I am by nature frugal

But I’ll give a big ton of money to anyone who can back up this preposterous “Sir, we are a forest nation” tale.

Whenever Trump tells a story when an unnamed person calls him 'Sir', it's bullshit.https://t.co/nIoaaGcyi5

I’d like to see video of trees spontaneously combusting.

The Next Supreme Court Justice Will Be ALL WOMAN, You Know What I'm Sayin'? (Hubba-Hubba!)

For those who missed it pic.twitter.com/MmaYg1EibP