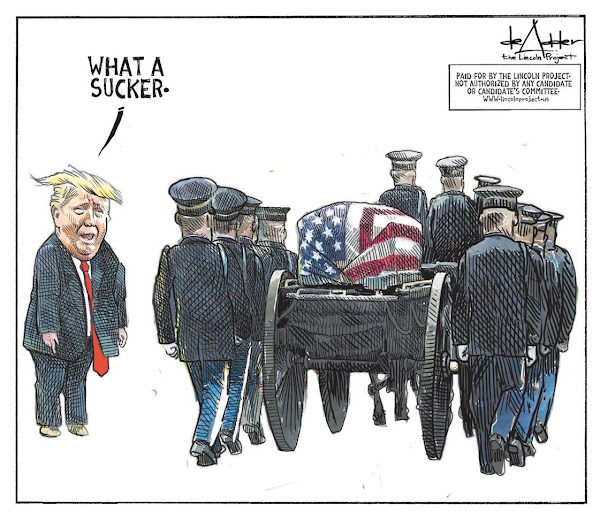 John Roberts, Chief White House correspondent for Fox News assured viewers that Donald Trump "never said" the horrible things that have been reported in the last two days by (a) The Atlantic, (b) The Washington Post, (c) The New York Times, (d) The Associated Press, (e) the United States Department of Defence, (f) the former Chief of Staff to the Secretary of Homeland Security (Miles Taylor), (g) Trump's former top lawyer (Michael Cohen), and (h) other former Trump administration officials.

This morning, Fox’s Chief White House correspondent @johnrobertsFox called the timing of the reporting “curious” and assured viewers, “The president never said that,” per his sources https://t.co/swhHTlYkiu

As Fox's own reporters confirm parts of the Atlantic story, Greg Gutfeld refers to it on air as a "hoax" and a "scam" pic.twitter.com/Fg938GaSyf

Trump would say about American veterans: "What's in it for them? They don't make any money."

On including wounded military veterans in a parade: "That's not a good look. Americans don't like that." pic.twitter.com/9uDuUTfMt9

I used to manage the Fox News dot com homepage. This would be an extraordinary and unusual decision to run this denial as the top story despite having confirmed key details of the reporting https://t.co/GOf2RUjXcV

Have you ever seen an outlet work so hard to undermine / discredit its own reporting? pic.twitter.com/8WkQqV4PtT

pretty weird chyron for a story your own outlet has confirmed key details of pic.twitter.com/xolRIZsQTH

When a guest on Fox News informs Fox News what Fox News is reporting on the Fox News website.

Using the Fox News confirmation against Fox News while on Fox News pic.twitter.com/91PJGcSKNE

Just remarkable that after Fox's own reporter *CONFIRMS* key details of The Atlantic's report, this is the headline on the network's website. pic.twitter.com/uiPEOegrwl

Fox now running this chyron. C'mon @BretBaier, you're supposed to be a newsman! Your own outlet has confirmed key details of the report! pic.twitter.com/OAN9hYhoic

another chyron from the 7pm hour -- worth noting that this is purportedly one of Fox's hard-hitting "straight news" shows, not opinion programming pic.twitter.com/18Ukpa5ZMq

None of the drafts POLITICO reviewed referred to a threat from Antifa. https://t.co/feEq5UJlmI

BREAKING: Donald Trump is the piece of shit 2/3 of Americans have said he is every day for four years.

He called your father in law a loser on television, refused to go to his funeral, and didn't want flags at half-mast when he died. Have some fucking pride, man. https://t.co/hhpas8nkuF

You're going backward in journalism time, Washington Post. When "some people say this, other people say that, we have no idea" is the best you can do, don't do the story. https://t.co/YnfgFoQicw Your job is to make things clearer, not to feed back to us claims and counter claims. pic.twitter.com/u9XAsHrpRw