2016 Flashback: Two Trump Videos Meant To Show His Support For US Veterans Featured Footage Of Russian And Germany WWII Soldiers 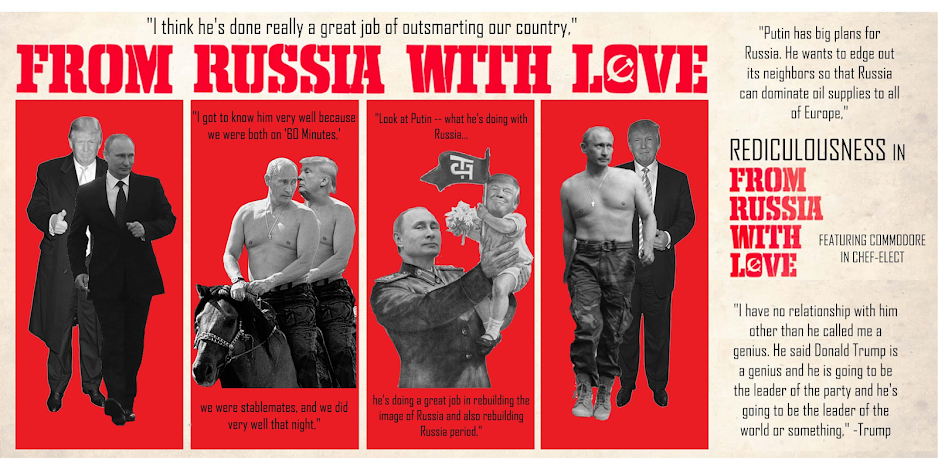 In a single morning, Donald Trump promoted a photo that originated from a neo-Nazi Twitter account and posted a campaign video that mistook Soviets for U.S. military veterans.
Trump's campaign on Friday shared a Facebook video vowing to reform the Veterans Administration that included stock footage of Russian -- not American -- former servicemen with medals that bore the communist sickle and hammer symbol. ...
"In the Veterans Administration, the incompetence is beyond. We will stop that," Trump says in the video before showing images of Soviet veterans that was taken in Russia in May last year, according to the stock video site that hosts the footage. "We are going to take care of our veterans." ...
It's not the first time the Republican presidential front-runner has mistaken foreign soldiers with American servicemen.
In July, Trump's campaign produced a promotional image showing soldiers wearing German World War II uniforms instead of American ones.

A little over two months ago, Facebook removed a Trump campaign ad because it contained Nazi symbolism. That was the third time in only three weeks the Trump was caught using Nazi symbols in his campaign ads. Trump has also identified people in his videos of being wounded veterans even though they are not veterans at all (see below).
He Meant "I'm A Serial Liar Who Will Say Anything In The Hopes Of Fooling People Into Thinking I'm Doing Something Good Rather Than Wanting Them To Die"

Dr. Anthony Fauci says he's not sure what President Trump meant when he said the country is "rounding the corner" on the coronavirus pandemic https://t.co/XTp0aNCoRz

"'Cancel Culture' Is The Most Horrible Thing Ever . . . And This Fox Reporter Should Be Fired For Writing Something Bad (But True) About Me"

The President calls for Jennifer Griffin to be fired https://t.co/ENFuWLkWYT

The President of the United States is up rage tweeting at 1am while more Americans die from Covid on his watch.

He’s also retweeting himself from 10 hours ago because the adderall is starting to wear off and he’s running out of material.

Extra Mulligan for you on the golf course tomorrow sir. You deserve it. https://t.co/jk59sR9XNo

Trump And Putin Both Working On And Promoting Disinformation Campaigns
About Mail-In Voting (According To US Dept. Of Homeland Security)

My position on Trump & Putin has always existed independent of Mueller’s report or any intel dossiers & revolved around one simple question: why won’t the most verbally abusive, belligerent, xenophobic president in modern history ever criticize Putin or Russia, even mildly? Why? https://t.co/UOWNzmbw8O

His refusal to criticize Putin is stunning. It is literally the only thing he shows any self-discipline about as president. What they have must be really powerful. https://t.co/Us9tKy7AAK

“The president is ‘a witting collaborator in a Russian disinformation campaign...” https://t.co/SyQtmtdWw8

Russia is boosting Trump's war on mail voting with a disinformation campaign https://t.co/RPq8EF7pVj

A lot of the Dossier turned out to be true. Almost none of it has been disproven. https://t.co/TzcoCr31HU

DHS warns that Trump is Putin's mouthpiece because... He is.#SaturdayMorning https://t.co/7uEooOO6Qu

All Trump had to say about the poisoning of Alexei Navalny was: "I don't know all of the facts, but obviously, poisoning and murdering your political rivals is not a good thing."
Yet Trump's loyality to Vladimir Putin and Russia is so strong that HE COULD NOT DO IT.
Trump Promised He'd Have A Healthcare Plan By July 2015. . . . Just Give Him Another "Two Weeks".

“Hopefully, you’ll see within 72 hours one aspect that actually comes out as it relates to some of the health care” — Mark Meadows on Wednesday about the health care plan Trump promised in July (it has now been 72 hours!) pic.twitter.com/yzodRThD7J

He Gets All The Best Endorsements

Oops! (When You Re-Use An Old, Debunked Lie To Cover Up Your Latest Lie)

This gentleman is not a wounded veteran. He was born without arms, as Snopes has explained https://t.co/JQm1wQjRLC.

The Trump campaign also wrongly depicted him as a veteran in a 2016 ad...using this photo to replace an image that showed Russian veterans instead of Americans. pic.twitter.com/iYf8pmwZrL

My favorite part is how it’s the same person mentioned in the snopes article doing it again pic.twitter.com/2FJyiqzMck

Yes. A low-budget ad about treating veterans better. When people pointed out the men in the stock footage had Soviet medals on their uniforms https://t.co/eFPGE0xf9u, the campaign replaced them with this photo, which is, again, also not of a veteran. https://t.co/m4Eh9Z2tnn