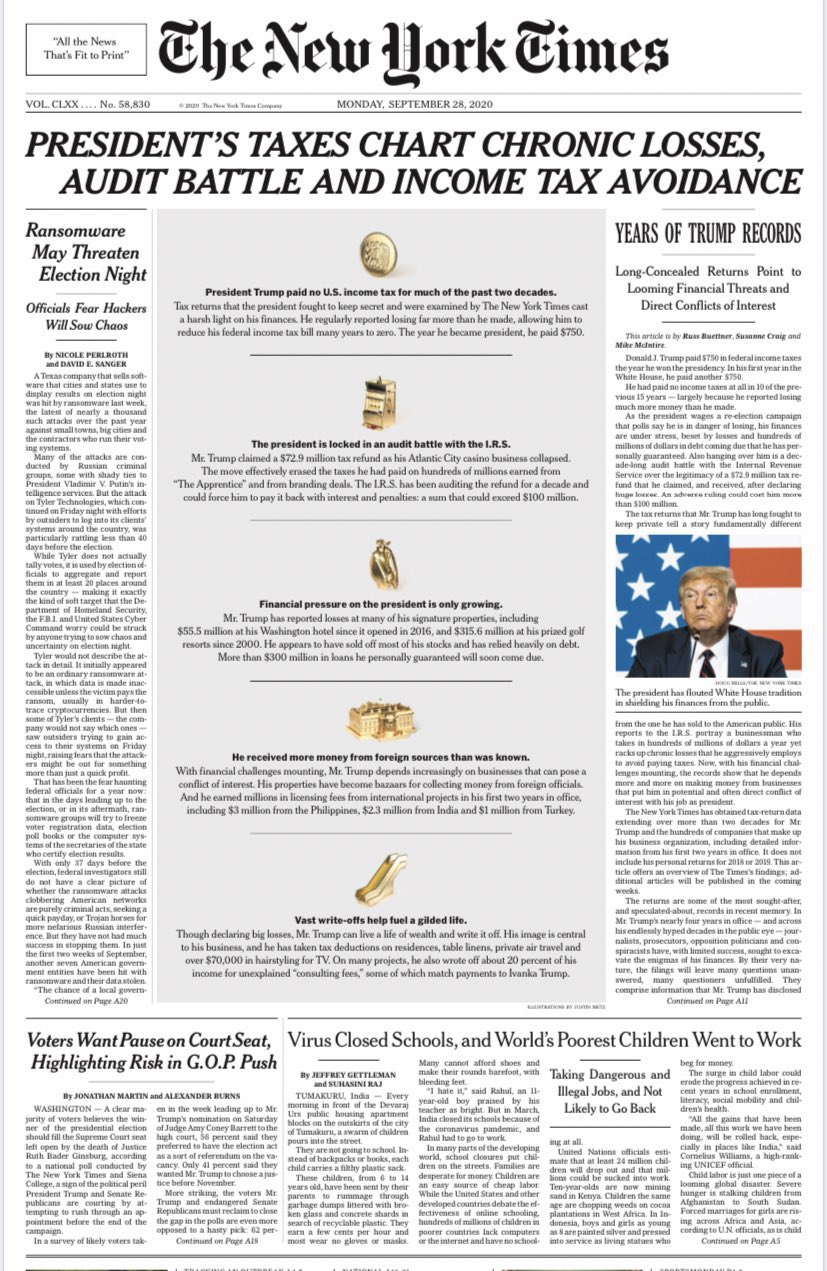 Trump's Makeup Person Must Be An Antifa Mole 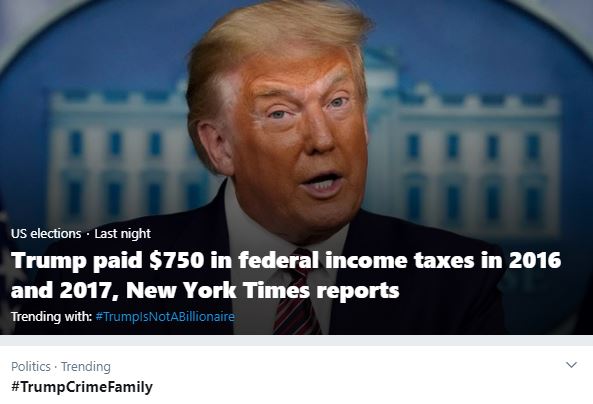 NYT: Trump lied in his financial disclosures. "In 2018, for example, Mr. Trump announced in his disclosure that he had made at least $434.9 million. The tax records deliver a very different portrait of his bottom line: $47.4 million in losses."

Trump has violated the #EmolumentsClause so many times my head is spinning. I wrote about it before impeachment for @NYDailyNews https://t.co/tgYPZ5HELT this entire #TrumpTaxes scam is a like a MOB RICO scheme. It's a crime family on our dime. #BidenHarris2020 #TrumpCrimeFamily

Donald Trump’s tax returns show that he paid his daughter Ivanka as a consultant, even though she is a member of the company which is against IRS rules.https://t.co/I9rcKH42Z8 via @politicususa

It's a good night to take a look at the "Trump Inc" podcast. Lotta stuff there that adds to this story.

They are all con artists and it goes way beyond his taxes. They defrauded banks too. And, of course, their customers. Over and over again.https://t.co/r6BtIqenPe

JUST IN: The United Kingdom's @Channel4News has obtained leaked documents from the Trump campaign that lists 3.5 million Black Americans as "Deterrence" and outlined efforts to stop them from voting.

There it is. In the middle of a public health crisis he’s ignored and a recession he’s helped create republicans want to steal your health care during a pandemic by judicial fiat and replace it with nothing. pic.twitter.com/fxQ1Egro92

"Within The Next Four Years, More Than $300 Million In Loans — For Which Trump Is Personally Responsible — Will Come Due"

“The records go much further to revealing the conflicts created by Trump’s refusal to divest his business interests while in the WH. His properties have become bazaars for collecting money directly from lobbyists, foreign officials and others seeking face time, access or favor.”

1/ There are many reasons to be disturbed by the NYT story on Trump’s taxes. The national security implications, however deserve to be deeply examined. I have no doubt journalists and commentators are working on those stories right now. To get you started, how about facts:

The best part of his denial to @TimOBrien was that those telling him that Trump was only worth a few hundred million were jealous of him because they had 400-pound wives at home.

Donald Trump is so poor, he can’t even own the libs.

DJT is so broke, Lindsey Graham’s campaign loaned him money. 😂

Even I never did that. https://t.co/L6j6gEzBUm

Maybe because there’s no drug that helps a person debate better and it’s batshit insane to insist otherwise? https://t.co/DSPynpz9PO

Biden campaign on President Trump's attempts to make up a drug test policy for the upcoming presidential debate:

Joe Biden "intends to deliver his debate answers in words. If the president thinks his best case is made in urine he can have at it." (1/2)

"We’d expect nothing less from Donald Trump, who pissed away the chance to protect the lives of 200K Americans when he didn't make a plan to stop COVID-19." (2/2)

The Trump Death Cult Is Also A Suicide Cult

DeSantis opened all Florida bars Friday. They are celebrating at Elbo Room in Fort Lauderdale pic.twitter.com/9Fx9qFvAS6

My older brother lives up in Montana. He would meet friends for beers on Thursday nights and they never wore masks. He was just hospitalized with COVID-19. This is a HIGHLY INFECTIOUS disease that is killing people. Going to a bar in Florida is playing fucking Russian roulette.

The story of Trump former campaign manager Brad Parscale’s armed standoff:
-While drunk, he retrieved + loaded a weapon during argument with his wife
-She had to flee and call 911
-She had bruises on her arm/face
-SWAT team involved
-10 firearms retrievedhttps://t.co/lkleqF1U1H

Needless to say virtually every factor here would have been justification for the police shooting him 19 times if this was a different neighborhood. https://t.co/Pu6bpJM9vv

The campaign’s initial reaction was to blame Democrats and “RINOs.” Now, a police report shows Parscale’s wife said he hits her. https://t.co/dBlZ7bCx1W