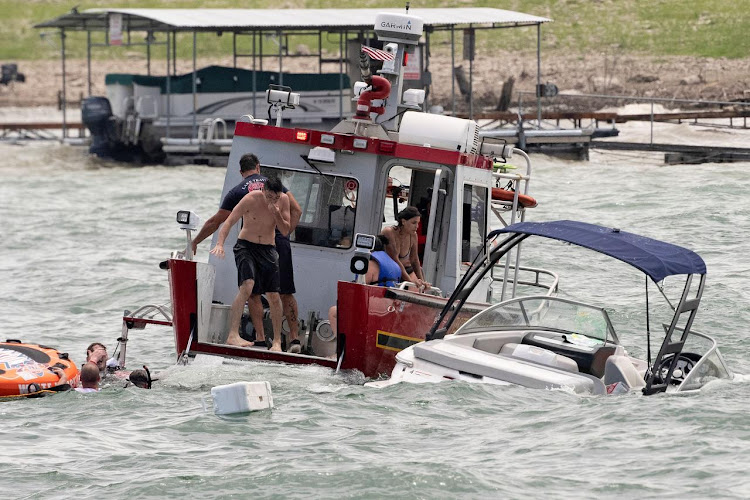 Nothing screams privilege like a parade of expensive motor boats during a recession, massive unemployment, a pandemic, and climate change.

Totally fitting for the "I've got mine" class.

HAPPENING NOW: TCSO confirms multiple boats are in distress and sinking on Lake Travis for the "Trump Boat Parade"

At this time, there is not a confirmed amount of boats that are experiencing issues on the lake.https://t.co/rRkb8tjcxP

Reports of sinking boats on Lake Travis began coming in on the Citizen app at around 1:20 p.m. Saturday. https://t.co/g84ooZJ5Bs

UPDATE: No injuries have been reported at this time; however, local reports say multiple boaters are being given citations for failing to have the required life jackets onboard and operating boats under the influence of alcohol.

Live look in on some of the #Dumbkirk boaters pic.twitter.com/6pXOljaOem

It was just the old boats and most of them had preexisting conditions.

"There were many fine people...on boat sides.."

Does he realize multiple boats in a boat parade in his honor sunk today? https://t.co/UTshzSsmrI

I quote tweeted him. He has since taken the tweet down. But thank goodness for Screen capture.

There are videos of Trump golfing the day he posted this tweet. #focused https://t.co/UTshzSsmrI

188,000 Americans are unavailable for comment on the president’s golf swing https://t.co/MqE76zJ3Eu


Trump: "Like The Blacks, [Hispanics Are] Too Stupid To Vote For Trump"

“I will never get the Hispanic vote," Trump allegedly told Cohen. "Like the blacks, they're too stupid to vote for Trump. They're not my people." https://t.co/qV4Okrq9QI

NEW: In upcoming book, Michael Cohen writes Donald Trump's disdain for Obama was so extreme he hired a "Faux-Bama" to participate in a video in which he "ritualistically belittled the first black president and then fired him." He includes this photo: https://t.co/LGrqsUUrY2 pic.twitter.com/otwYW8VSmQ

“The cosmic joke was that Trump convinced a vast swathe of working-class white folks in the Midwest that he cared about their well-being,” Cohen writes. “The truth was that he couldn’t care less.” https://t.co/fDlSb4hkXX

NEW: @PostRoz and I got our hands on Michael Cohen’s new book, where he claims Trump called all countries run by Black people “shitholes,” and dismisses — in racist ways — both Obama and Nelson Mandela. https://t.co/hDrGt57NXl pic.twitter.com/d25OQnvzVi

I would love for someone to ask him what ‘critical race theory’ is https://t.co/SxgkmOd9UG


Some People At CNN Do Not Understand What Journalism Is

“One side has been verified by multiple sources and media organizations including Fox and has years of video evidence of Trump saying similar, while the other side is consistently full of shit. Which one is right? Who knows!”—Cillizza