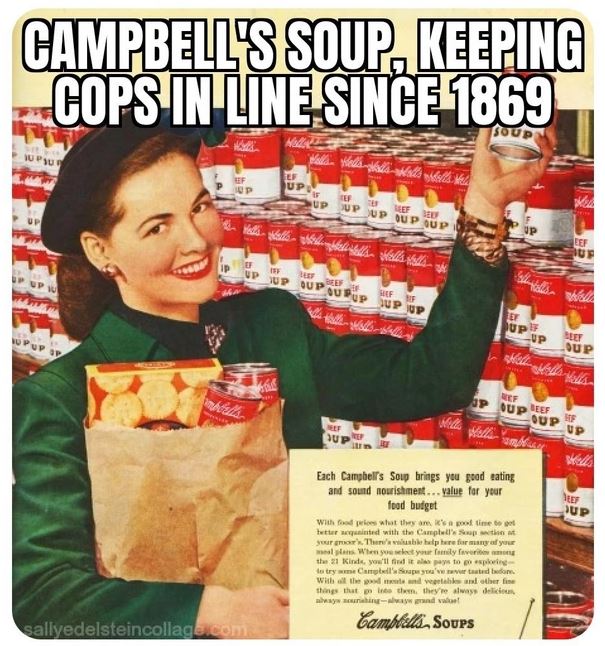 The President is now talking about people throwing cans of soup and tuna fish while plugging Goya pic.twitter.com/BjYUcsJR4h

"They go out & buy tuna fish & soup, you know that, right? Goya, I hope. Good guy. Because they throw it. It's the perfect weight. Tuna fish, they can really rip it & it hits you. It's true ... You can throw that sucker, you can put a curve on it." -- Trump on protesters pic.twitter.com/FVkDLv1hdD

Trump: They have like 30 cans of soup. They have like 25 cans of tuna. They get caught. I’m bringing this home to my family... pic.twitter.com/765NrNytPb

The president on violent protesters: "Cans of tuna fish. They go out and buy tuna fish and soup. You know that, right?...Because they throw it. It's the perfect weight, tuna fish, they can really rip it, right? And that hits you. No, it's true. Bumble Bee brand tuna."

Incredible! INCREDIBLE! The soup conspiracy is back! The whole country made fun of him over this for like two straight days, and he's back into it! HOW CAN ANYONE BE THIS STUPID?

Soup *and* (tuna) sandwich - it's the antifa blue plate special.

Never bring a can of Soup to a Tuna Fish fight!

Bumble Bee, because when you’re a Starkist they let you do anything.

When tuna is outlawed, only outlaws will have tuna

Bumble Bee, Starkist, and Chicken of the Sea are all trending right now because the President of the United States is a fucking idiot.

he is not just off his fucking rocker, he isn't even on the fucking porch anymore

Trump motions for a reporter to take her mask off before she asks him a question pic.twitter.com/rhGId1bstz

Q: Why haven't you said anything about the US hitting 200,000 coronavirus deaths?

TRUMP: "Go ahead. Uhhhhh. Anybody else?" pic.twitter.com/gUv1kgG9OT

Follow-Up: "Okay. Why Have You Acted Helpless And Weak And Allowed China To Kill 200,000+ Americans And Destroy The Country's Economy?"

Trump's message about the US hitting 200,000 coronavirus deaths is to try and pass blame to China pic.twitter.com/Z2OlvxG7dy

March 29: Fauci issues a rough prediction of 100,000 to 200,000 deaths; Trump, who'd tweeted that day to boast about the TV ratings for coronavirus briefings, tells him, "I think the number is going to be a very different number than the numbers that you talked about." pic.twitter.com/DHOpVGyTia

Sanjay Gupta: Trump giving himself an A+ is saying the very best the United States can do on the COVID-19 pandemic is to have the worst results on the planet.

They're literally congratulating themselves for coming in lower than the Cambodian genocide. https://t.co/JzH1KIYzug

Trump just once again claimed, absurdly, that Biden is "against God" pic.twitter.com/xcEiynGZoG

TRUMP: "By the way, our opponents, they don't want petroleum products. They want wind. Let's open up wind. Let's have some wind & every once in a while the wind will blow & you will produce a couple of things & then you can close down your plant for the rest of the season." pic.twitter.com/nnRdw94Y08

It's the booing and dissing congresswomen of color portion of Trump's speech pic.twitter.com/QyZr0iUMG7

Trump: You know AOC? Not a good student. Not good at anything but she’s got a good line of crap pic.twitter.com/479TPP5YU3

Meanwhile, Trump Can't Pronounce His Own Name . . . Or Spell It

"@LunsfordWhitney: This is rich coming from her. She tweeted you will be president! #Women4Ttump #Trump2016 https://t.co/2GSGfLS1yT"

Trump on why you don't see anti-Trump protesters at his rallies anymore: "It's dangerous. It's dangerous for them." pic.twitter.com/dkgzaP9Vl9

Trump on Ilhan Omar: She’s telling us how to run our country. How did you do where you came from? pic.twitter.com/XLSRZd6yFf

She hasn't been committing genocide in her current country.

"I mean, honestly, what the hell did he spend all that money on the plastic surgery [for] if he's gonna cover it up?" -- Trump mocks Joe Biden for having social distancing at his events and wearing a mask. #BeBest pic.twitter.com/kknqrOHtyw

Says the guy who has fake hair and teeth. Wears lifts in his shoes. Wears clown makeup everyday. Has had TONS of plastic surgery. I've never seen someone project more. It's not even close either.

I’m wondering why he uses orange spray paint to cover himself. https://t.co/Mo8ZxOxGKi

"They're trying to make our numbers look bad" -- Trump goads his crowd into booing the governor of Pennsylvania governor for enacting public health measures to slow the spread of the coronavirus pandemic pic.twitter.com/JuTfZlkulD

"We're gonna make a play for New York," Trump claims (he's losing by nearly 30 points in NY, so no, he's not) pic.twitter.com/zEOE5KLxi5

Trump: They have these fake ballots... When you see shenanigans please report it to your authorities, the real authorities. pic.twitter.com/Rul89Ocd0f

Trump makes stuff up, insists Mexico is actually paying for his border wall even though they're not pic.twitter.com/WuaCWWWxxU

Someone please find this guy a good therapist pic.twitter.com/Avj7rXtjYK

Trump fans chant "lock them up!" about the Mueller investigators. Trump then suggests the State Department is protecting Hillary Clinton by hiding her emails pic.twitter.com/qod1Tiru2L

Trump goes on a long aside about he really, truly hopes he'll never have to use the unprecedentedly powerful weapons of war he has at his disposal pic.twitter.com/GGbr6WItZq

Lol. Someone in the crowd tells Trump that a gallon of gas costs $15, and he seems to believe it pic.twitter.com/ADVk0euzlL

"They'll give him a shot of something ... we want a drug test" -- Trump accuses Joe Biden of juicing like Barry Bonds circa 2002 or something pic.twitter.com/M3Ym0AuwAd

The President again suggests his opponent will receive an injection of drugs before the debates and calls for a drug test pic.twitter.com/V7hY8zTusE

"Melanie came up to me wearing a Hard Hat, big strong woman, and she says, 'Sir, thanks to you we have Big Ten football back! We're also saying Merry Christmas again and my 409K is up 98,000%! Thank you Sir!' Melanie then started crying for the first time ever."

First Lady and Sir Mr. President are very much in love pic.twitter.com/Yn6ZNRs3cI

Trump whines for a couple minutes about how he doesn't have any friends anymore. Again, somebody get this guy a good therapist. pic.twitter.com/TlwlGk7jj8

"You can't give your wife a kiss goodnight. You have to wear a mask" -- Trump mocks public health measures that Democratic governors have implemented to try to slow the spread of coronavirus pic.twitter.com/U3GVg9qAGT

"We want to go in, and we want to take over Portland" -- Trump recounts a conversation he had with the governor of Oregon

He then mocks @AliVelshi for getting shot with a rubber bullet in Minneapolis pic.twitter.com/OSqDJ3XYLa

"It's a beautiful sight" -- Trump glorifies violence against reporters pic.twitter.com/UAENo59vrR

"They grabbed a guy - ‘I'm a reporter! I'm a reporter!' - ‘Get out of here!' They threw him aside like a bag of popcorn. But honestly, when you watch the crap we've all had to take...it's actually a beautiful sight"-Trump glorifies violence against journos pic.twitter.com/UAENo59vrR

"Blood in the sand" -- drink! pic.twitter.com/sDUcZa7IGq

"You know, NASA was an absolutely disaster. Grass was growing through the fairways" -- Trump has golf on the brain pic.twitter.com/G665200pW9

Trump (July 4, 2020): Cancel Culture Is "The Very Definition Of Totalitarianism" And Has "Absolutely No Place In The United States Of America"

...with our Country, the United States Military, Government Contractors, and Grantees. Americans should be taught to take PRIDE in our Great Country, and if you don’t, there’s nothing in it for you!

NEW: Trump is now running against a Kamala Harris presidency, stoking his base with conspiracy theories that she’d soon take over and become the first woman president if Biden wins.

He is elevating Harris after myriad attacks on Biden have not stuck.https://t.co/ynKC57VT6L

Biden as a radical socialist didn’t work so it’s back to birtherism.

It is already federal law that people with preexisting conditions can't be denied coverage. Thanks Obama! https://t.co/voqAFYjGxg

It's tweeting car ads while 200k Americans are dead from his inaction for me. #TrumpLied200KAmericansdied pic.twitter.com/oJ7C4XT1uA

“The president will be laying out some additional health care steps in the coming, I would say, two weeks.” - @PressSec on Tuesday.

For Trump, lots of stuff is always coming in “two weeks” pic.twitter.com/nAZ7uuc5DW

Kayleigh promising Trump's healthcare plan in *two weeks* is proof that this administration doesn't even realize that it's become a parody of itself.pic.twitter.com/WO40jzVnRO

It All Depends On Your Definition Of "Mass"

Jeanine Pirro argues Kyle Rittenhouse is not actually a mass murderer because he had plenty of opportunities to shoot more people. pic.twitter.com/z2a6QbbGJS

NEW: Chris Wallace, moderator of the first presidential debate, has selected topics for the 9/29 debate – The Trump and Biden Records, The Supreme Court, Covid-19, The Economy, Race and Violence in our Cities, The Integrity of the Election #Debates2020https://t.co/d7Q8iNXWzf