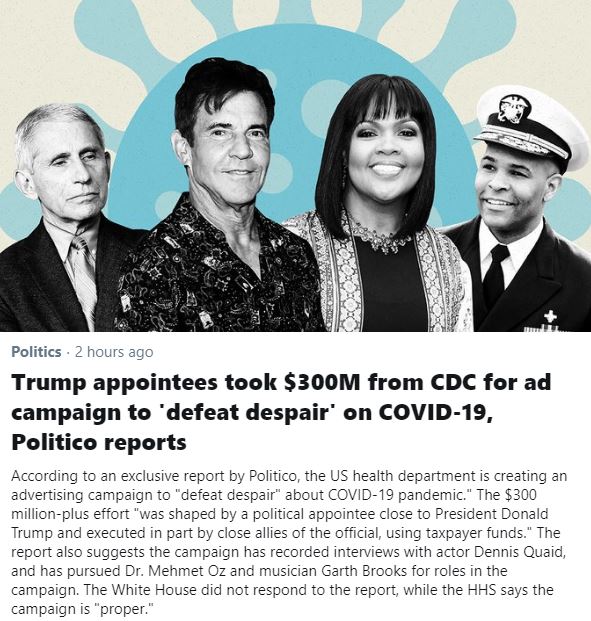 The health department is moving quickly on a highly unusual advertising campaign to "defeat despair" about the coronavirus, a $300 million-plus effort that was shaped by a political appointee close to President Donald Trump and executed in part by close allies of the official, using taxpayer funds.

The ad blitz, described in some budget documents as the "Covid-19 immediate surge public advertising and awareness campaign," is expected to lean heavily on video interviews between administration officials and celebrities . . .

The public awareness campaign, which HHS is seeking to start airing before Election Day on Nov. 3, was largely conceived and organized by Michael Caputo, the health department's top spokesperson who took medical leave last week and announced on Thursday that he had been diagnosed with cancer. Caputo, who has no medical or scientific background, claimed in a Facebook video on Sept. 13 that the campaign was "demanded of me by the president of the United States. Personally." . . .

The campaign is indeed under investigation by Democrats, who have charged that the massive ad blitz is an attempt to boost Trump's standing on Covid-19 before the election and have unsuccessfully called on HHS to halt the contract. POLITICO first reported the planned campaign. . . .

[Ten] current and former health officials told POLITICO that they have concerns about the campaign's scope, goals and even how it has been funded — by pulling money out of health agencies like the Centers for Disease Control that are in the midst of fighting the pandemic, rather than working with lawmakers to set up a brand-new advertising effort with congressional oversight, or drawing on substantial internal resources and expertise in running health-related public service campaigns.

"CDC hasn't yet done an awareness campaign about Covid guidelines — but they are going to pay for a campaign about how to get rid of our despair? Run by political appointees in the press shop? Right before an election?" said Josh Peck, a former HHS official who oversaw the Obama administration's advertising campaign for HealthCare.gov.

Despair will be a thing of the past after Dennis Quaid encourages you to cheer up, this is all an overblown hoax.

It's extremely on brand that Trump thinks the solution to the coronavirus is a TV ad campaign.

Meanwhile, Florida Governor and Top Level Trump Death Cult Member Ron DeSantis has removed all COVID-19 restrictions on businesses throughout the state. His announcement came on the same day Florida had the highest number of new cases and deaths of any state in the country.

DeSantis: "We're not closing anything going forward . . . There will not be limitations." (On the number of deaths?)

Florida had 179 deaths on Thursday, which was more than the combined totals of France, UK, Italy, Germany, Greece, Japan, Venezuela, Canada, South Korea, Belgium, Ireland, Norway, Denmark, Australia, Jamaica, Switzerland, and Greenland*. It has had the most deaths of any state in the nation over the last seven days. Its positivity rate is 10.8%, well over the WHO's target of 5% for 14 consecutive days recommended for a safe reopening.

One observer noted: "Florida hasn't finished suppressing its last outbreak before doing something that will almost certainly invite another."

from the FL Health dept,,In Florida, 83 percent of those who’ve died of the virus were over 65 years old. One in four people over 85 with a confirmed infection has died.

DeSantis is part of this team

If saying “we honestly don’t care if you die or not” is not enough to get people to vote for the other candidate I honestly can’t think of what would do it.