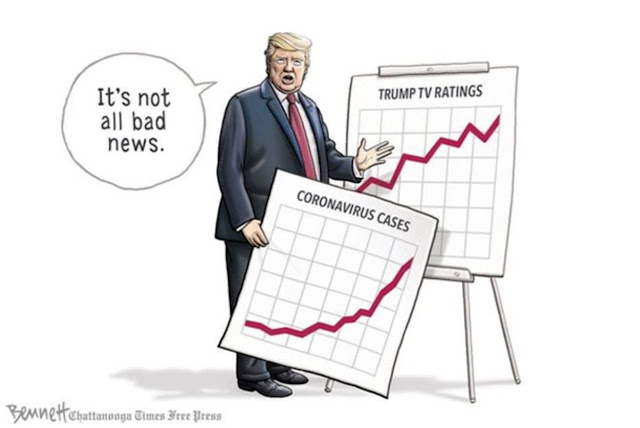 
Trump's Weak Spot Is The Facts. Reporters Should Press On.

It was amazing to watch just how upset Donald Trump got on Monday night when reporters asked him about a new, fact-filled report about how hospitals across the nation have been dealing with the coronavirus pandemic.

The report, from the Department of Health and Human Services inspector general's office, was a summary of brief telephone interviews with 323 hospital administrators from across the country during the last week of March. ...

Its chief finding was that many hospitals reported severe shortages of testing supplies and extended waits for test results, limiting their ability to monitor the health of patients and staff, and putting a strain on hospital beds, personal protective equipment, and staffing.

This wasn't a critique of anything or anyone. It was just a reality check.

And that's exactly why it sent Trump into a sputtering rage, lashing out at imagined enemies and mocking the very notion that anyone he didn't appoint should be in a position to hold him accountable.

Trump threw two tantrums, acting like a spoiled child who has a few pieces of broccoli on his plate and refuses to eat them. But these were facts -- which can pierce through Trump's unhinged version of reality. So Trump felt particularly wounded. Instead of trying to answer the question or lie his way through it or even ignore it and say some unrelated shit, he chose to insult both journalists:

Trump was still in a snit the next morning, rage-tweeting.


President Donald Trump's contempt for science and disdain for experts who question his political narratives are driving his increasingly defensive and brittle management of the coronavirus pandemic. Trump was short-tempered and rude during much of his daily briefing on Monday as he refused to even listen to questions about shortcomings in the federal government effort. ...

[Trump's] feuds with reporters on other issues Monday underscored his wider reluctance to allow inconvenient evidence to mar his cultivated picture of hugely successful leadership amid the worst domestic crisis since World War II . . . One reason why Trump appeared to be flailing in recent news conferences may be that his political approach . . . based on denying robust fact-based evidence . . . is being badly exposed.


I've written before that Trump's daily appearances shouldn't be widely broadcast live, and should be annotated so that journalists can put what he says in context as he speaks. I wrote on Monday that, rather than ask incremental questions, reporters who attend should at least ask Trump big questions, like: What's the plan? When will it be safe to go out again? How will we know?

But there's also some value in simply confronting Trump with the facts and watching him explode in fury, attacking the questioner, attacking the source, blaming others and generally refusing to take any responsibility for what's actually going on. The facts are his greatest enemy, and the public needs to understand that.


He has survived other challenges ... by ... trying to control the public's understanding of events with streams of falsehoods. The coronavirus may be the first crisis Trump has faced ... where the facts — the thousands of mounting deaths and infections — are so devastatingly evident that they defy these tactics.

TRUMP: "Were going to put a hold on money spent to the WHO."

REPORTER: Is the time to freeze funding to the WHO during a pandemic?

REPORTER: Yes you did

Trump is engaging in conspiracy theories in the middle of a public-health crisis.