As Trump Rambles and Bloviates Hour After Hour, Day After Day, At What Point Will The Media Call Out His Flood Of Lies And Demand Real Answers?


Forever addicted to being in front of television cameras, Trump's strategy of hosting nonstop White House briefings on the pandemic has sparked a heated media debate about whether the marathon sessions of lies and misinformation ought be carried live on TV every day. (Hint: They absolutely should not be.) Void of empathy and human emotion beyond Trump's endless desire for political revenge, the news-free briefings now drag on day after day, as Trump rambles through disjointed commentaries about an array of unrelated topics.

Instead of enhancing his stature, the briefings confirm that Trump is guilty of committing that mortal TV sin — he's boring. And overexposed, hosting more than two dozen pandemic briefings to date. Even his Republican allies think it's a problem. ...

It's true that in late March the Trump pandemic briefings were a ratings hit, as millions tuned in each day, in hopes of getting helpful information about the unprecedented health crisis that was unfolding. And considering the White House had gone an entire year without hosting a press briefing, the events were undeniably newsworthy, even as Trump trafficked in purposeful disinformation. Since then though, the air seems to have leaked out of the briefing room, as the Q&As have taken on a Groundhog Day quality to them. ...

Often talking just to hear himself talk, Trump's appearances, where he aggressively says nothing of importance for hours on end, have morphed from must-see TV, to re-run status. ...

There's little sense of urgency anymore, despite the grave topic at hand. The briefings now consists of a handful of bored reporters asking the same questions day after day, and Trump not answering them, opting instead to engage in textbook narcissistic behavior, as he credit himself for containing the virus (he did not), and lashing out critics and scientists who question the emperor's clothing.

Reporters look defeated and a bit embarrassed to have to take part in this sad, daily charade. Indeed, the briefings now carry with them a feeling of futility, which only adds to the media negligence for airing them live. ...

Trump loves to see himself as a television star and a ratings magnet. But over the last few weeks with the ceaseless bloviating, he's turned himself into a TV has-been.


I think this is a keen insight. I've watched dozens and dozens of Trump rallies from start to finish and they have devolved over time into nothing more than ritual. Or perhaps, more to the point, they are like a 80s band nostalgia tour — full of people for whom Trump was their first political star and they just want to hear the greatest hits. To anyone who doesn't know the words, it's quite dull.

The rest of the Trump voters have been channeling him through the right-wing media fan club. The Trump Fox and company portray is nothing like the real thing. I suspect that there are at least a few of them who realized that for the first time when they saw his performances at these coronavirus rallies. Even more Independents who might lean GOP saw that he's lost it.

About four weeks ago, I thought the number of cases and deaths in the US would keep increasing and Trump's incompetence would be unmistakable. And as he continued to lie and blame everyone else, the media would have to get tougher on him. They would stop giving him the free ride he has enjoyed for three-plus years and really press him to answer for himself.

That has not happened. In fact, many mainstream outlets, while also publishing important in-depth exposes on the Trump administration's many failures, are still, in their daily reporting, not accurately reporting on his deranged behaviour and comments. Amazingly, the media is treating his childish attacks on the media as simply differences of opinion. 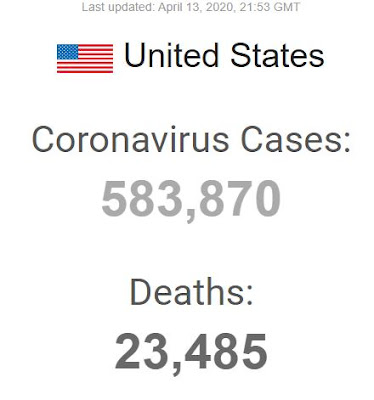