On March 13, 2020, the same day Donald Trump said two very big words ("national emergency"), he announced a bold proposal, in which his administration would partner "with private companies to set up drive-through coronavirus testing sites" across the country.

Trump's proposal would involve "the biggest business people, the greatest retailers anywhere ... celebrities in their own right". Walmart, Target, Walgreens, and CVS would all donate space in their stores' parking lots to "make drive-thru tests available in the critical locations identified by public health professionals". Individuals would "be able to drive up and be swabbed without having to leave [their] car".

Trump also said Google had dedicated "1,700 engineers" to work on a website that would assist Americans find a testing site.

Mike Pence stated: "Every American should be proud of this incredible public-private partnership that's going to speeding access of testing to millions of Americans in the weeks ahead". 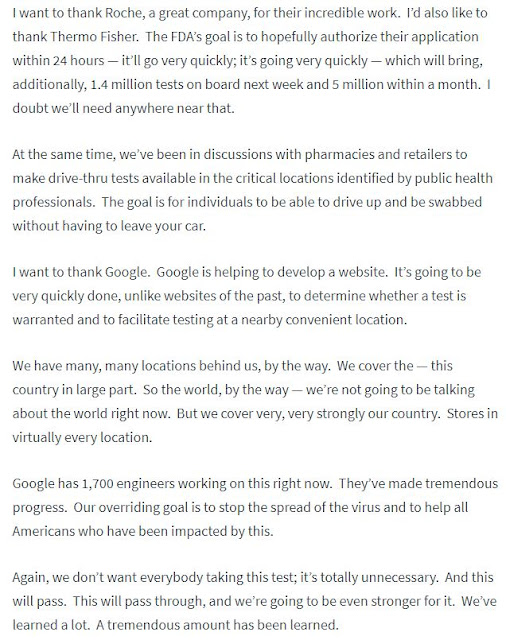 One week later, Walmart's CEO stated the company would be hiring 150,000 temporary workers to assist with the testing.

Walmart, Target, Walgreens, and CVS have a combined total of 26,400 stores in the US. Drive-through testing centers in the parking lots of the country's biggest stores, where people can be tested "very safely, quickly and conveniently". ... Testing sites in "virtually every location". ... It sounded great!

At the time of the announcement, several members of Trump's administration admitted that he had overstated the plan's scope and timetable. The CVS, Target, Walmart, and Walgreens CEOs all admitted (after the television cameras had been turned off) that they were given very few details on when the testings would begin or how the tests would be administered.

No drive-through testing locations were ever opened for the general public. Not even one. On April 3, three weeks after Trump's announcement, the Department of Health and Human Services stated that only five drive-through testing locations existed in the entire United States. Walmart had opened two drive-through testing locations near Chicago. (I could not verify if each site had 75,000 employees.) CVS, Rite Aid, and Walgreens had each opened one site. Target (whose CEO looked forward "to do[ing] our fair share to alleviate this growing threat") had zero sites. Tests at these five locations were provided only to first responders and health care employees. There are now 13 sites in the United States, including six opened by Rite-Aid. Trump cut off federal funding for the project last week.

Google was extremely surprised to learn (from Trump) that 1,700 of its employees were making "tremendous progress" on a virus-related website for the government. The website Trump promised would be "very quickly done" was never made.

Trump says "it's ridiculous" to think the federal government is supposed to be doing testing in a parking lot somewhere. (He called up corporate CEOs at a press conference to tout a supposed initiative to test people in their parking lots; few sites are operational.)
— Daniel Dale (@ddale8) April 16, 2020

Does he have no memory of announcing his grand partnership with "the biggest business people" (celebrities!) less than five weeks ago? It's certainly possible.

Appearances are the only things that have ever concerned Trump, so he stopped caring about the idea the second the words left his mouth.
Posted by allan at 7:58 PM

You really do a wonderful job with Mad King Donaldo. These posts are something else!