"Wartime President" Trump Abandons The Battlefield Right When The Enemy Gathers Strength And Advances, Yelling "Mission Accomplished" To His Troops Over His Shoulder 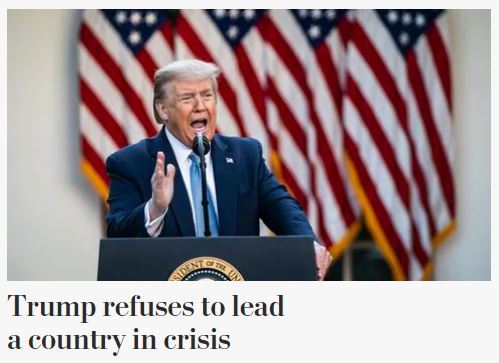 Donald Trump has washed his hands of the coronavirus. In his mind, he has triumphed over what he calls the "invisible enemy".

On Wednesday, Trump proclaimed the US had "passed the peak" and the virus was in decline. He cited no evidence to support his claim (because none exists).

Hours after Trump finished proclaiming victory, the US set a record for the most COVID-19 deaths in a single day. That mark was shattered the very next day, with 4,591 COVID-19 deaths reported in a 24-hour period ending at 8:00 PM ET on Thursday.

Does this look like a trend that has passed its peak and is now declining?

From Our World in Data: 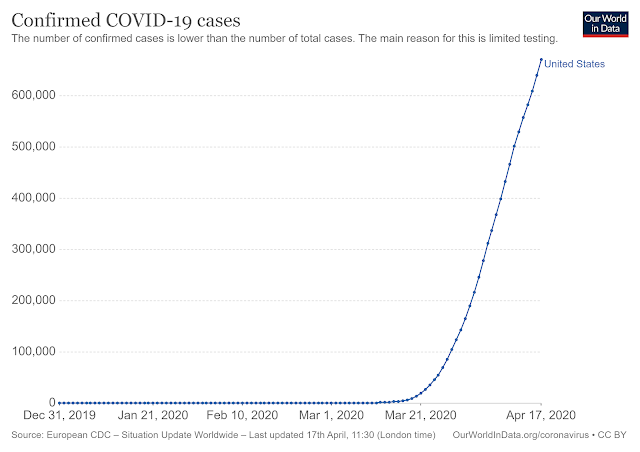 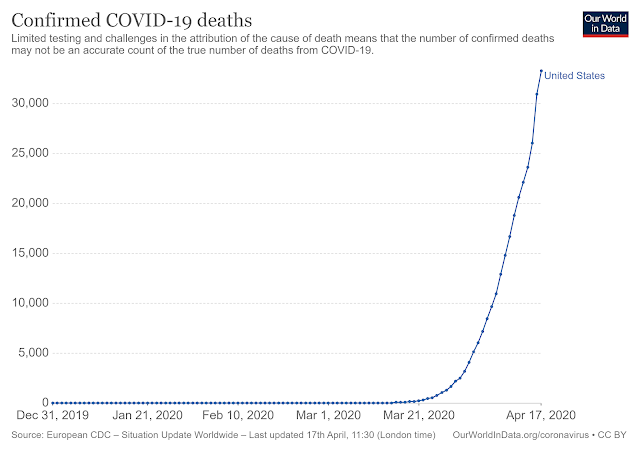 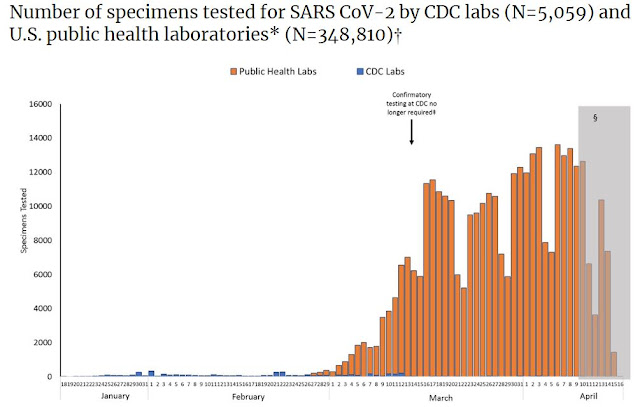 The virus has not peaked and testing remains minimal and inconsistent. New cases and reported deaths are escalating at the same rapid pace (a nearly-vertical line) they were increasing almost four weeks ago.


Heather Digby Parton believes that might be a good thing.


On Thursday, [Trump] rolled out [his] Big Plan to "reopen the economy" ... Since his administration so grievously ignored the initial response to the threat and ended up bringing the country to its knees, you might have thought they'd have learned their lesson and at least worked to put in place a workable plan to raise it back up.

Needless to say, that did not happen. His lead-up to the big unveiling of his plan has been utter confusion. On Monday, Fox News announced that the "Council to Re-Open America" would be staffed by all the best experts in the nation.

That didn't go over so well and it was soon reported that Jared Kushner and Ivanka Trump would not be named to the council. So Trump took a different tack and decided to get the CEOs of all the big companies he could think of on the horn to join his "advisory council," a set of awkwardly named "Great American Economic Revival Industry Groups." That didn't go so well either. ...

Trump claimed these people were all on board with his "plan" to reopen right away, but in fact they were all reluctant to promise anything like that without full-scale testing in place to reassure their employees and customers that they would be safe.

Trump likewise asked a hundred or so legislators to join this council, including 32 House members and 64 senators ... [They] also made it clear that reopening anything could not happen until a full-fledged testing regime was in place. ...

The "plan" Trump made public on Thursday wasn't a plan. He opened by declaring victory over the virus, saying we have hit the peak. He then basically showed a series of posters that Mike Pence will be able to hold up ... They outline three phases to be used to begin to resume normal business. ... [But] none of it can happen as long as the virus is still in the population and there's no way of knowing who has it now or who had it in the past. ...

At the briefing on Thursday, CDC director Robert Redfield emphasized the importance of "early diagnosis, isolation and contact tracing," and Trump interrupted him saying there are "wide open plains, wide open spaces ... where you're not going to have to do that." He said there are places where the virus has been completely eradicated and that he expects to see stadiums full there, all of which is simply not true. There are hotspots developing in less populated areas all over the country, including a horrific outbreak in one of his favored states, South Dakota, whose Republican governor continues to carry the Trump banner and pretend it isn't happening.

Trump is still engaging in magical thinking, believing that if he vamps long enough, this crisis will go away. And his aides have obviously devised a strategy for him to blame others when it doesn't. ... [T]he president of the United States is essentially washing his hands of the crisis.

At this point, I think that may be a blessing. Many of the governors are way ahead of him as far as putting together plans to reopen and have formed regional compacts to try to coordinate their processes. ... The Trump administration has abdicated its responsibility and is nothing but an impediment to getting anything done properly at this point.

Why did Trump's position change in only a few days from insisting he possessed "total authority" over the states and could order them to obey his commands to now saying he would "let the governors call the shots" on when to relax social restrictions?

It's another example of trump passing the buck, of refusing to take responsibility for his actions. The sole reason for his about-face is so he can claim it wasn't his fault if something doesn't go perfectly, and so he can continue trashing state governors for doing things he disapproves of.

Having hoisted his own "Mission Accomplished" banner, Trump has likely forgotten that it was fewer than three weeks ago when he stated: "Nothing would be worse than declaring victory before the victory is won."
Posted by allan at 3:07 PM