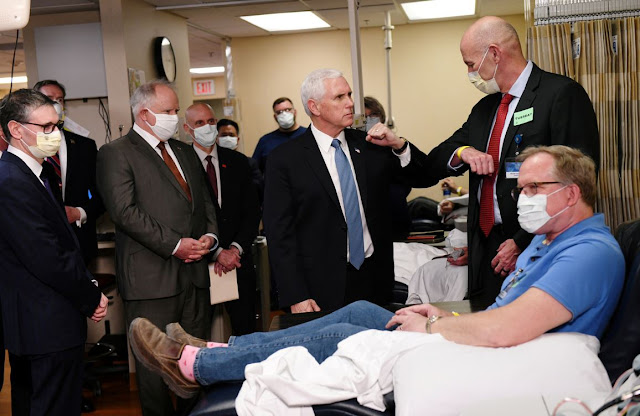 Vice President Mike Pence's office has threatened to retaliate against Steve Herman, a reporter for Voice of America, who tweeted that Pence's office told journalists the day before they would need masks for the visit to Minnesota's Mayo Clinic on Tuesday.

Pence did not wear a mask during his entire visit. It was newsworthy and there have been three official explanations (so far) as to why.

1. Pence said he wanted to look the patients "in the eye". (But (a) the masks don't cover the eyes and (b) the patients were all wearing masks.)

2. Pence said he tested negative for the virus and so, since he could not spread it to anyone else, he did not need a mask. (It's likely that most of the doctors and nurses do not have the virus and yet they wore masks because it increases safety. And it's the clinic's policy. At the very least, it sets a good example.)

3. Karen Pence (the VP's wife) appeared on Fox News today, claiming her husband was unaware of the clinic's policy until his visit was over.

It could not have been easy to top Pence's two excuses for idiocy, but Karen came through with flying colours. Pence is the head of the White House Coronavirus Task Force. AND he was a key participant in the formation of safety guidelines during the pandemic, such as wearing masks in hospitals. AND every other person in the entire building was wearing a mask (whether he or she tested positive or negative). AND the clinic had emailed Pence's office, reminding them of its no-exceptions policy regarding masks.

Pence's wife is saying he (a) did not remember his own guidelines, (b) did not notice a mask on every else's face, and (c) has a staff that doesn't inform him of important things throughout his day. Not a good look for the Veep.

Herman tweeted: "All of us who traveled with [Pence] were notified by the office of @VP the day before the trip that wearing of masks was required by the @MayoClinic and to prepare accordingly."

The Washington Post reported that the tweet "enraged Pence's staff". Herman was told he had violated the off-the-record terms of the planning memo for the clinic visit.

A friendly reminder to bring a face mask before your visit to a medical clinic during a pandemic. That's not exactly something that might compromise national security, is it?

Herman said he was notified that he was banned from further travel on Air Force Two. However, a spokesperson for Pence said punishment had not been decided, pending an apology from Herman or VOA.

A recent article in Vanity Fair ("Inside Donald Trump and Jared Kushner's Two Months of Magical Thinking") included this tidbit:


The same day [February 23], Trump finally pushed [Health and Human Services secretary Alex] Azar aside and put vice president Mike Pence in charge of the White House's coronavirus task force. ... He also knew that Pence could be controlled. ... In the West Wing, Trump often belittles Pence in front of others. "Pence lives in mortal fear of being booted off the ticket. Trump constantly reminds Mike that he almost didn't choose him," a Republican that heard Trump make the comments told me.

It seems likely that the real reason Pence refused to wear a mask was because Trump (who also refuses to wear a mask) told him: "I better not see you on Fox wearing a fucking mask! Now I want you out of my fucking sight .... as soon as you finish shining my shoes."
Posted by allan at 7:32 PM