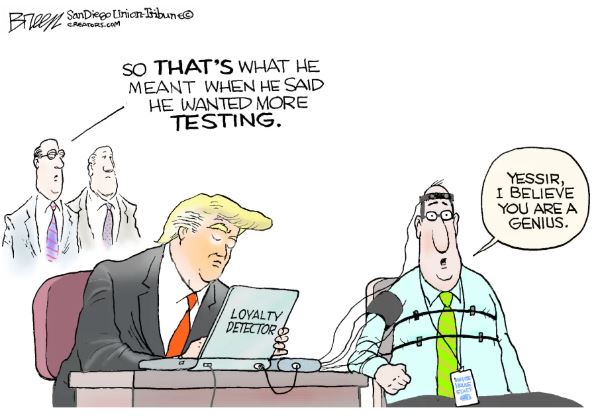 The "Don't Let The POTUS Drive The Bus" Edition

TRUMP's case for reopening: "A prolonged lockdown combined with a prolonged economic depression will have inflicted an immense and wide-ranging toll on health, including drug abuse, alcohol abuse, suicide, heart disease, & many other dimensions of physical and mental well-being." pic.twitter.com/lrqpIlLvbp
— Aaron Rupar (@atrupar) April 16, 2020

"Now that we have passed the peak in new cases, we are starting our life again. We are starting rejuvenation of our economy again" -- Trump pic.twitter.com/PlD5yGSXJw
— Aaron Rupar (@atrupar) April 16, 2020

And this is without widespread testing. People are dying without being tested. None of the WH data is accurate.
— Karyotic (@realKaryotic) April 16, 2020

That's... not how this peak works. It's not going away anytime soon. And it hasn't even peaked in much of the country yet (Texas still has two weeks before the projected peak).
— miss speech (@miss_speech) April 16, 2020

TRUMP: "America wants to be open. And Americans want to be open." (Polling actually more than twice as many Americans are concerned their state governments will lift restrictions too quickly than the opposite: https://t.co/k0L2uFRGA9) pic.twitter.com/VjSMEVwtPu
— Aaron Rupar (@atrupar) April 16, 2020

Trump claims some states (without naming names) "got too much credit for what they've done" to deal with the coronavirus pic.twitter.com/fcYBegj8RI
— Aaron Rupar (@atrupar) April 16, 2020

TRUMP on resuming sports: "Depending on the area, you will have large areas of the country where this has been totally eradicated. You will be able to have those full arenas ... Many of them are going to be starting without the fans. It'll be made for television." pic.twitter.com/nDxCVeNKBp
— Aaron Rupar (@atrupar) April 16, 2020

1) Trump didn't close travel to China. He restricted it after virus was already spreading in US

3) This would be a better burn if Trump hadn't spent all of Feb downplaying coronavirus & telling people it would go away on its own https://t.co/3wsLqUZrli
— Aaron Rupar (@atrupar) April 16, 2020

No thanks, we’re good.

Glitches Prevent $1,200 Stimulus Checks From Reaching Millions Of Americans
Several million people who filed their taxes via H&R Block, TurboTax and other popular services were unable to get their payments. Some parents reported they didn't get the $500 promised for their dependent children.

Thousands Of OSHA Complaints Filed Against Companies For Virus Workplace Safety Concerns
Employees told regulators about failures to follow social distancing, lack of protective gear and other issues at scores of U.S. employers 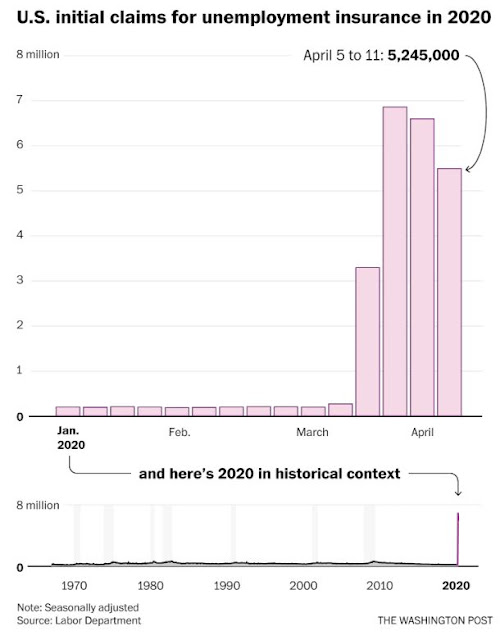 BREAKING: Trump just said that the last time gas prices were this low were the "1950's when they had the big large dollar bills".

Trump just said he’ll be “authorizing” each and every Governor to reopen their states... Da fuck? That’s like standing in front of a restaurant and yelling at everyone who enters ‘I authorize you to eat’... This impotent backwards ass mahfucka... #TrumpPressBriefing
— Cyrus McQueen (@CyrusMMcQueen) April 14, 2020

On December 1 or 2, 2016, a sober Jared Kushner met with the Russian ambassador and asked if he or others could come to the Russian embassy in DC to have secure conversations with Moscow. Spoiler alert: His father-in-law later gave him a security clearance. https://t.co/I20Z3RbpOJ
— George Conway (@gtconway3d) April 16, 2020

This is appalling reasoning, but we also need to discuss something else: that's not what The Lancet said, and the underlying source for all this is <drumroll> the very same WHO / Imperial College model that Fox News hosts and other right-wingers have been complaining about. /1 https://t.co/R4Ni1SR8bv
— Max Kennerly (@MaxKennerly) April 16, 2020

Here's the WHO / Imperial College model they link to: https://t.co/ZgOMwH95CO

A "2-4%" reduction was modeled for the UK doing nothing but closing schools for 3 months. It's not a model of what would happened if we re-opened schools. /2 pic.twitter.com/uR1Gj1CSVU
— Max Kennerly (@MaxKennerly) April 16, 2020

That same report produced the dire projections which prompted many of the shut-down orders in the first place. As it showed, even a 5-month intervention wasn't enough to get cases below US capacity.

Dr. Oz was pushing on Hannity a misreading of the same study that Carlson, Ingraham, and Sen Cornyn have been saying is unreliable, while Trump cut funding to the people who made the study.

He needs a board review. I suppose if his concern is that we've become like west Africa, it may be valid. The article: https://t.co/hmRfnuO7QK pic.twitter.com/Y7Fho2zoY9
— Dave Perrino @🏡 (@DavePerrino) April 16, 2020

This is #DrOz family. All he has to do is kill one of his kids on his show and I'll pay attention to what an acceptable number of dead kids is. Seriously, fuck this guy. pic.twitter.com/q5K8uHwlun
— Bill McCormick (@BillMcSciFi) April 16, 2020

Sen Kennedy: "We've gotta reopen, and when we do the coronavirus is gonna spread faster" pic.twitter.com/v3KsK0XPEw
— Andrew Lawrence (@ndrew_lawrence) April 16, 2020