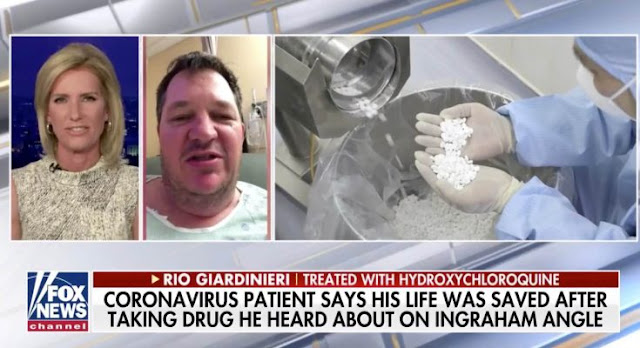 Jedediah Bila, one of the co-hosts of the weekend edition "Fox & Friends", has tested positive for Covid-19. Last week, Bila posted to Instagram:


I know I've been a little MIA. I'm actually at home recovering from Covid-19. I'm very much on the mend, so please don't worry. ... This is a crazy time in the world, full of so much anxiety and fear. I've learned so much this past week and done so much thinking. ... I'll be sharing more in coming weeks. ...

I wonder if one of the things she has learned is that the virus is real.


is reportedly concerned that its early coverage of the pandemic, which downplayed the severity of the virus, could result in "legal action." One group in Washington state, the Washington League for Increased Transparency and Ethics, has already filed a lawsuit against the channel. The suit requests an injunction against the network in order to prevent it from "interfering with reasonable and necessary measures to contain the virus by publishing further false and deceptive content."

Fox should be terrified of lawsuits over its coverage. "Fox & Friends" has downplayed the pandemic on several occasions. Another host, Ainsley Earhardt hyped a malaria drug last month, in much the same way Donald Trump has been doing in his daily press conferences. She complained last month that the nationwide lockdown made it difficult for women to get manicures.

Brian Kilmeade, yet another co-host of "Fox & Friends", asked "what's the big deal?" about in-person voting recently in Wisconsin. "Keep your social distance, wear your gloves, have election workers take care of everything is sanitary and get used to it. This is the way it's going to be."
Posted by allan at 12:39 AM