Trump Hates Doing His Job, But Loves Starring In His Own Nightly Variety Show

...the Fake News Media into not covering them, but that effort failed because the ratings are through the roof according to, of all sources, the Failing New York Times, “Monday Night Football, Bachelor Finale” type numbers (& sadly, they get it $FREE). Trump Derangement Syndrome!
— Donald J. Trump (@realDonaldTrump) April 8, 2020

US Cases/Deaths, Every Three Days Since Trump Announced A National Emergency("Two Very Big Words") And Declared "No, I Don't Take Responsibility At All" 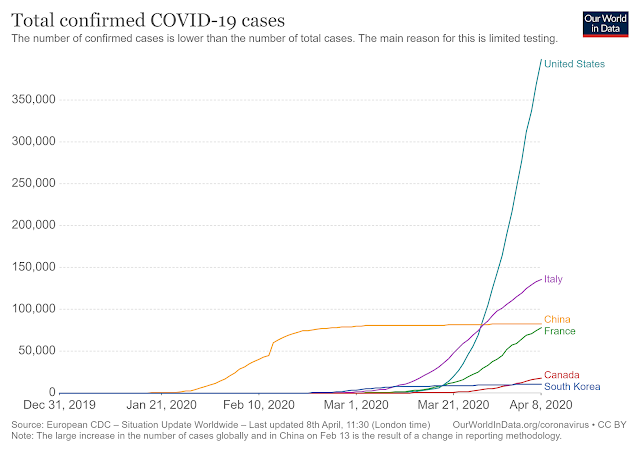 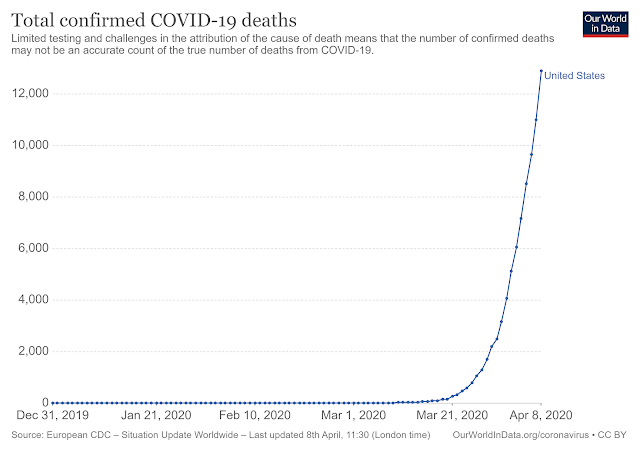 2,000 people died in US yesterday due to willful negligence of Trump Regime, their #70days of inaction, but now President Trump is personally hosting a 2 hour variety show every night with "killer" ratings. So why is everyone so upset?!?
— David Rothschild (@DavMicRot) April 8, 2020

I would prefer our President optimize for lower death toll, rather than higher ratings. But, this is what you get when you hire sociopath game-show host as President and he learns that higher death tolls are good for ratings.
— David Rothschild (@DavMicRot) April 8, 2020

There are people dying every day. Could you stfu for just a few hours about your ratings and how great they are. How about honoring some who have died. If you need some names I have more than I ever wanted to know
— Joe Lockhart (@joelockhart) April 8, 2020

People are locked in their houses as they watch thousands of their fellow Americans and small businesses all over the country die every day. Can't believe this has to be said, but this isn't something to celebrate.
— Colin Seeberger (@CMSeeberger) April 8, 2020

Why the f*ck do we even have a 25th amendment if we're not going to use it on a bona fide madman sitting in the Oval Office?
— Mia (@TheCenteredEgg) April 7, 2020


Trump's lengthy daily press briefings are a sludge farm of lies, misinformation and dangerous false claims. Questions swirl why he is promoting potentially dangerous drugs for off-label use, and why he consistently not only refuses to accept the facts journalists in the room report, but personally attacks them. His press briefings are free-wheeling stream-of-consciousness therapy sessions for the presidential candidate frustrated by not being able to hold campaign rallies anymore, thanks to the deadly pandemic he made exponentially worse.

Trump Is The Star Of The Coronavirus Show, And He's Loving Every Minute Of It
Ashley Feinberg, Slate, April 7, 2020


There is nothing Donald Trump loves more than a rally. It's where he gets to hear hordes of people screaming his name in ecstasy, where he gets to call for the downfall of his enemies, and where he gets to talk, uninterrupted, for hours at a time about any passing thought he chooses. He loves his rallies so much he's done 96 of them since being elected president. The rally is perhaps the only place Donald Trump is truly happy. ...

In mid-March, however, with the coronavirus spreading ever more rapidly, Trump reluctantly announced that he'd be canceling his campaign rallies for the foreseeable future ... Trump's sole source of self-soothing was being ripped from him by the thing he hates more than anything: his job. ...

While Trump allows medical professionals and other featured players to participate on a rotating basis, everyone knows that Trump is the star. He leads the briefings, he fields the questions (even going so far as to prevent Anthony Fauci from providing answers that might embarrass him), and he gets the praise he craves. ...

By now, everyone knows that the best way and perhaps only way to get Trump's cooperation is to slather him in praise. ... The result is a daily ritual where, quite literally, the first priority of all the pandemic responders is the boosting of the president's ego. In poring over Trump's briefings from the past month ... I found myself with nearly an hour of pure bootlicking. ...

[Trump] often speaks for over an hour, rambling his way through a stream of consciousness in the sort of stand-up comedy cadence his rallygoers know and love. He'll  ... [do] some performative media-bashing [and] listen to officials prostrate themselves, visibly basking in the warm glow of their stilted praise. ...

It's not all fun, of course. ... [Trump] genuinely despises being questioned ... He'll often have a tantrum or two, occasionally storming out if things get really bad. For the most part, though, this is the best part of Trump's day.

Meanwhile, Pence, the actual head of the task force, is little more than an afterthought. ... 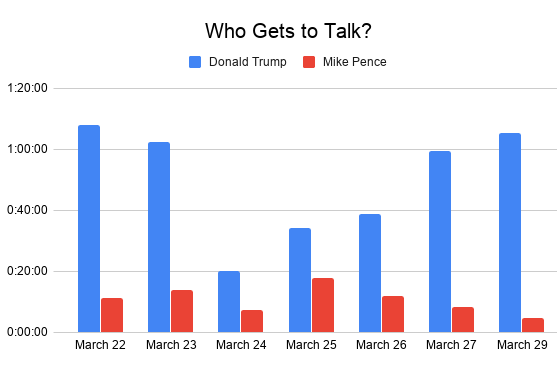 [Pence] knows perfectly well what this is. ... [He is] happy to do his boss's bidding, often humiliating himself in the process. ... 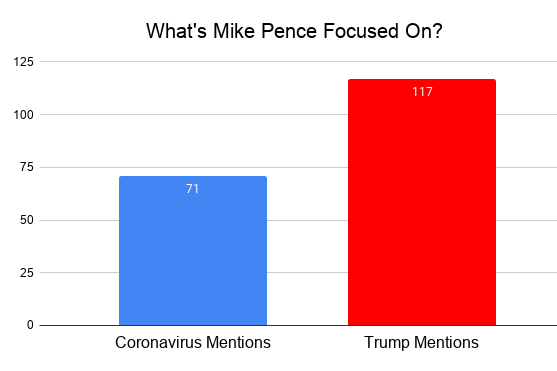 It's the largest, most captive audience Trump has ever had. He may lack the immediate feedback loop of a rally, but he's found a more than adequate replacement in the daily parade of government officials describing the various ways in which they'd die for him. The daily presser has largely stopped being even remotely useful, but like his rallies, now that he has it, it's hard to see why he'd ever give it up.


[T]he coronavirus briefings have given [Trump] a new, live and unfiltered daily platform before a captive national audience. True to his résumé, he has conducted them as a kind of reality TV, or rather, create-your-own-reality TV.

In this reality — often subject to later fact-checking by the press or to backpedaling by staff ... [a]ccurate reports of his conflicts with governors over federal support are "fake news." And no one could have anticipated a pandemic like this, despite warnings, playbooks and public-health infrastructure intended to do exactly that.

The daily coronavirus briefings, increasingly timed to run live on cable and broadcast right around the evening news ...

In its short life, for all its dead-serious subject matter, the program has developed the structure, rhythm and characters of a weekly reality show. ...

Mr. Trump's critics have said that his briefings are simply campaign rallies in another form. The two things do have elements in common: the litanies of grievances, the insulting of reporters and political rivals, the self-aggrandizement and selective history.

[F]or Mr. Trump, the briefings allow him to turn his pandemic response from a serial narrative, in which he's held accountable for his cumulative action or inaction over time, into an episodic production, in which all that matters is what happened in the latest installment.

Every episode, in this production, wipes the slate clean, like a sitcom restoring the status quo. All those comments about how the coronavirus is like the flu and about how the cases will soon go down to zero and about not wanting to receive infected cruise-ship passengers because "I like the numbers being where they are"? That's last season. ...

Mr. Trump's career has always been based on the premise that appearance is everything. ... But there are limits to this media strategy; you can't simply give a disease a mean nickname or dismiss it as if it were Don Lemon or Nancy Pelosi. ...

A virus, ultimately, produces its own reality.

The Coronavirus Show Has But One Star — And The Rest Are Supporting Players
Ashley Parker, Washington Post, March 17, 2020


The Coronavirus Show — directed by, produced by and featuring President Trump — has certain rules.

The president, who is every episode's star, always gets the best lines — delivering the happy talk quotes and zingers that are often riddled with half-truths and misstatements, but that allow him to present to the audience the world as he wishes it were, not as it is, in the middle of a deadly global pandemic. ...

[Trump] appears when he wants, often at the beginning of coronavirus task force news conferences, and sometimes departs early, too — not dissimilar to his time as the actual reality TV host of NBC's "The Apprentice," when he would dole out the challenge and then recede off-screen to the let the teams battle for his approval.

This is generally when the real show begins. But this show, too, has its own set of rules.

Administration officials playing supporting characters must often shape-shift to inhabit two main roles: the role of Trump cheerleader, where they make sure to lavish praise on the president almost to the point of obsequiousness, and the role of competent government bureaucrats doing their very best to be honest and transparent with the public. ...

Before the truth-telling can begin, administration officials also take pains to praise the president, crediting nearly all good news to what they claim is Trump's swift decision-making and strong leadership. ...

Leon Panetta, who has served as White House chief of staff, defense secretary and CIA director for past Democratic presidents, said the mixed messaging is confounding.

"It's almost as if the vice president and all the others can't just talk about the facts and the truth of what's happening," Panetta said. "They've got to paint it in these broad brushstrokes that say whatever good is happening is the result of the president's leadership and whatever bad is happening is somebody else's fault."


Over the past two weeks, Trump has embarked on a striking chapter of his optics-obsessed presidency, turning the all-but-abandoned briefing room into the set of a largely unscripted television series that has gripped, worried and (depending on one's political affiliation) infuriated viewers.

Stripped of the weapon of his rallies ... Trump has created something more like a show built on narrative surprises and populated with familiar characters—the good doctors, the bad reporters, the loyal lieutenants. And in the middle of it all, playing the role of the ringmaster, the marketer and the brander, and the self-professed expert, is Trump.

His mood and his message have ebbed and flowed, alternately boasting and bashing, soothing and striking, intermittently solemn, flippant and peeved, flouting facts and shifting blame, underplaying dire projections and overselling potential vaccines. ...

Immersed in the world of TV—as an inveterate watcher, as a proven practitioner—Trump has settled into a formulaic rhythm. The briefing almost always starts with him. It almost always ends with him. He initially had deputized Mike Pence, of course, to head up his administration's coronavirus response, but ... the vice president continued to receive a share of praise, and Trump, two weeks or so ago, began to reclaim center stage. ...

Touting bold declarations of nonspecific actions, loosely tied to vague, noncommittal windows of time, [Trump has] deploy[ed] his well-practiced spoken stop signs ("excuse me," "just so you know"), and leaning hard on his superlative-laced lexicon ("never been done," "not even close," "tremendous" and "incredible" and "dramatic" and "historic") ...

Trump in the course of these briefings so far has ended up (as he has done throughout the bulk of his existence) often contradicting himself. ...

He has dubbed himself "a wartime president" while nonetheless insisting the federal government is not "a shipping clerk" for necessary medical supplies. ...

"August. Could be July. Could be longer than that," he said that day, responding to a question concerning when normalcy might return. As much as five months or more.

But he lost patience with those sober projections just a week into the war. "It's not going to be three or four months," he said, "as some people were saying"—first and foremost himself. "America will again, and soon, be open for business—very soon—a lot sooner than three or four months that somebody was suggesting. A lot sooner." 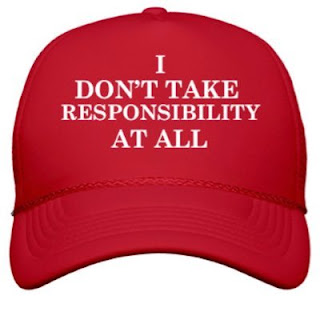 I hadn't seen this anywhere else. Nothing can surprise us any more, but we can still be horrified and terrified.

Yeah, I am still surprised that I still can be surprised.