Why Are Republicans & Fox Rushing To Defend A Progressive Liberal Who Protested Against Racists, Fascists, And Nazis? 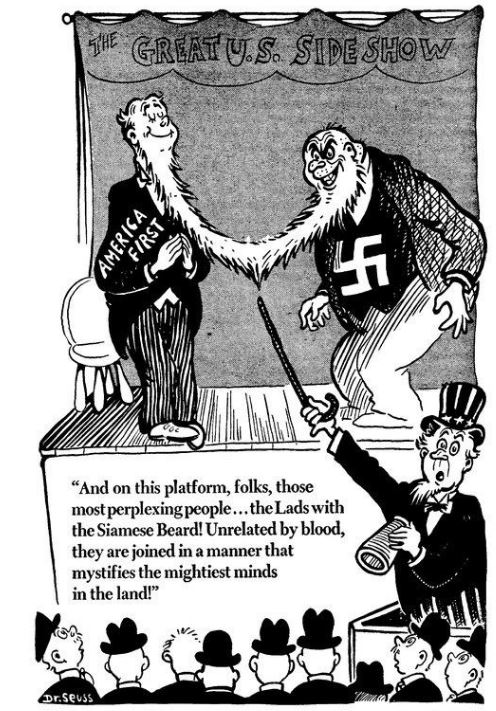 So . . .
Who wants to tell the nice folks at Fox & Fascists that Dr. Seuss was a member of Antifa?

AINSLEY EARHARDT: There's this cancel culture trying to cancel Dr. Seuss now. How far are they going to take this?

it's really amazing how much of modern conservatism is just being the biggest baby in the world pic.twitter.com/LXeawI1ina

Madison Cawthorn was on Fox & Friends First for an interview this morning. He was never asked about the multiple sexual harassment allegations made against him, but he was given an opportunity to rail against the purported cancelation of Dr. Seuss. pic.twitter.com/fC0XpVj8Lg

The purported "cancelation" of Dr. Seuss has been mentioned at least 32 times on Fox News & Fox Business already this morn. It was mentioned 22 times on Newsmax's morning show.

For context, "Covid" was mentioned 11 times on Fox & Friends, and 12 times on Newsmax's morning show.

Fox is still banging on about this pic.twitter.com/rxgpb5yRv2

“First, they outlaw Dr. Seuss and now they want to tell us what to say.” pic.twitter.com/825wEN6uKQ

Someone should tell him that before The Cat in the Hat, Dr. Seuss routinely and devastatingly satirized racist American nationalists. https://t.co/t45zzQI60C pic.twitter.com/JnZd9xSfNi

Offended, on Dr. Seuss news
well you’re shit out of luck
Cause I have 5 words for you
I don’t give a fuck

If the GQP knew the truth about Theodore Geisel, who in the years surrounding World War II drew more than 400 political cartoons for PM, a liberal New York newspaper, satirizing the "America First" movement, they'd "cancel" his ass so fast it would make your head spin.
(Actually, Geisel was anti-racist as far back as 1929.)
Check out Richard H. Minear's book Dr. Seuss Goes to War. 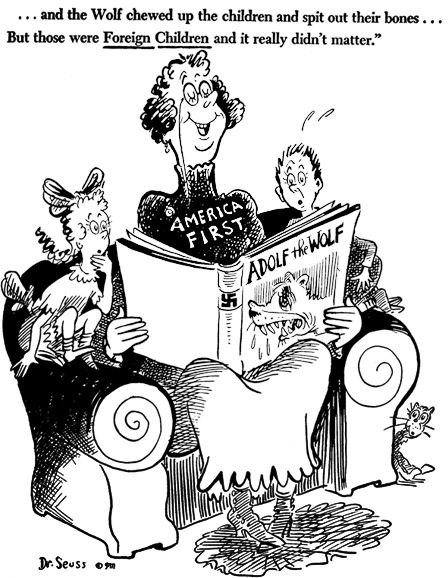 If you go back and re-read some of his most famous books . . . you'll find discreet appeals to the nation's most tender and malleable minds, promoting tolerance, resistance, and awareness.
Dr. Seuss revealed some of these messages outright, calling The Cat in the Hat "a revolt against authority." But many of stories' undercurrents are debated, others buried in edits.
"Yertle the Turtle, when Dr. Seuss first drew it, had a Hitler mustache," says Minear. The mustache didn't make it to print, but the 1958 storybook, centered around the rise of a power-hungry turtle, distills the perils of fascism into their most fundamental terms.
Likewise The Sneetches and Other Stories (1953), named for yellow creatures—some born with stars on their bellies, some without—cautions against racial prejudice. It's no stretch of the imagination to connect their patches with those worn by Jews during the Holocaust. "That wasn't the Star of David, but that's the issue behind it," says Minear. . . .
Political readings, of course, don't apply to every book in his output—but certainly some of his most enduring.
Each December, How the Grinch Stole Christmas (1956) warns a new generation of children of the trappings of consumerism. The Lorax (1971) is widely understood to be about environmentalism. The Butter Battle Book (1984), a tale of the Yooks and the Zooks whose unwavering opinions on which side of bread to butter find them in an arms race, is a satire of the Cold War that lays bare the consequence of intolerance.

Geisel was far from perfect; his cartoons also included ghastly racist stereotypes of Asians. Ron Lamothe, the filmmaker behind The Political Dr. Seuss, said Geisel sought to make amends for his earlier insensitivity by writing Horton Hears a Who, a parable for the post-war occupation of Japan, and dedicating it to a Japanese friend.
Old-School Dr. Seuss Drawings Skewer Fascism One Frightening Drawing At A Time
The Dr. Seuss Antifa Cartoons You've Probably Never Seen
If Curtailing Racist Imagery In Dr. Seuss Is "Cancel Culture", What, Exactly, Is Your Culture?

In Other News, Donald Trump's Balls Won't Lick Themselves

Lindsey Graham: I actually like President Trump. He has been very nice to me. He’s allowed me to be in his world... pic.twitter.com/YOiDWJeBtz