Ted Cruz: "Help Me Stand With Dr. Seuss" — Seditious Shithead Is Signing And Selling Copies Of Green Eggs And Ham (For $60) As A "Cancel Culture Collectible"

Ted Cruz has his priorities pic.twitter.com/36akScEvU6

You cannot make this shit up.
Don't even try.

Sen. Ted Cruz (R-Texas) is trying to cash in on the trendy conservative "cancel culture" by signing and selling hundreds of copies of a children's book that he did not write.
Cruz, via fundraising emails and Facebook ads, this week asked supporters to pitch in $60 or more for a copy of Dr. Seuss's "Green Eggs and Ham" that he'd autographed himself. Copies are selling on Amazon for $4.79.
"Stand with Ted & Dr. Seuss against the cancel culture mob to claim your signed copy of Green Eggs and Ham!" the politician urged on his donation page . . .
In an email, Cruz . . . described the book signed by him as a "cancel culture collectible." . . .

P.S.: Green Eggs and Ham is not one of the six books the Dr. Seuss Estate has decided to stop publishing.
I have questions.
Why are Republicans supporting government interference in how an American corporation runs its business (and yelling that it's a "dangerous path" to take if there is no interference)?
Why is Cruz defacing a famous book that will likely be in print for decades and selling it at a 1,252% mark-up rather than signing copies of the all-but-unknown Seuss books that will be retired? Wouldn't buying those books and distributing them now before they are "cancelled" make more sense?
How many ignorant Fox viewers understand that Cruz is "fighting" "cancel culture" by giving money to the corporation which is allegedly "cancelling" Dr. Seuss (i.e., Dr. Seuss Enterprises) while also proudly "standing with" an original member of Antifa?
Hint: The answer is not, in the infamous words of a Trump lawyer, a "non-zero number of people".

Indeed. Get one now! https://t.co/5VyHAjqnz1

Since GE&H is still in print this is meaningless. Cruz should offer to sign a page with racist imagery from one of the six discontinued books.

Seriously, if anyone has one of these books, can someone ask him to sign it and then post his response? He will look bad either way. 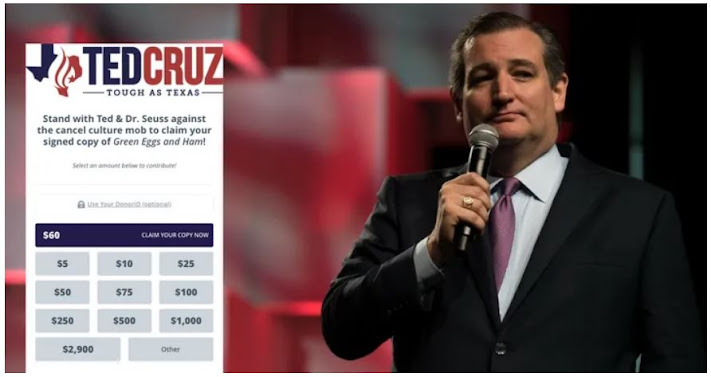 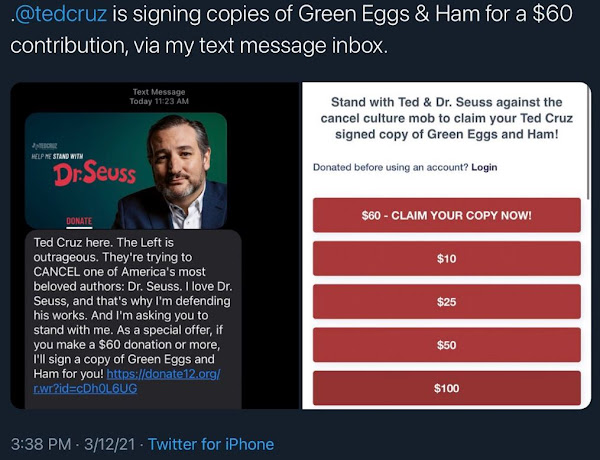 My strongest memory of Dr. Seuss is Ted Cruz reading his book all night long to deprive people of healthcare. pic.twitter.com/iml0SThx6T

Ted Cruz is fundraising off of a Dr Seuss book that the publisher didn’t pull https://t.co/K8WUjCXA9P

Lefties are losing their minds that I’m signing & sending copies of Green Eggs and Ham to anyone who donates $60 or more. 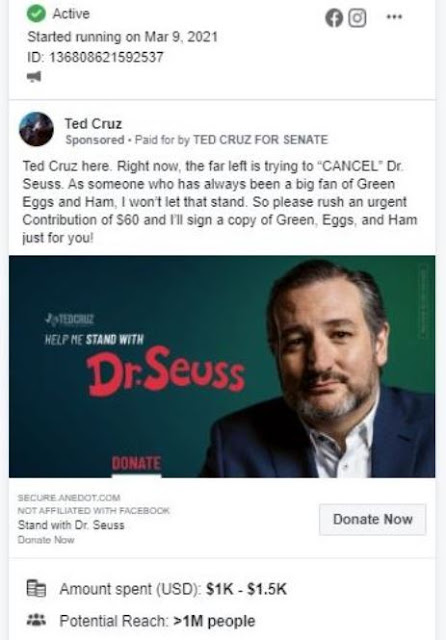 Hey, look! Cruz put the word "CANCEL" in quotes . . . because he's a moron who thinks that's how you "emphasize" a word. He is wrong.

I literally know "The Cat in the Hat" by heart without the book there because I read it so many times to my children.

Does anyone believe Mr. Person Woman Man Camera TV could recite even the inside of a greeting card or a fortune cookie message from memory? I mean, he thinks he has to tell us that "by heart" means "without the book there".

Trump is well-known for imitating his loathsome father and having nothing to do with raising his children. He once said any man who takes care of his children is acting "like the wife", which he did not mean as a compliment. And everyone knows Trump (age 74) has not read a book of any kind in more than fifty years.

This Is What Everyone Knows About Ted Cruz .. pic.twitter.com/Q2BIxAJoSO

Is there any chance Cruz would sign this book? 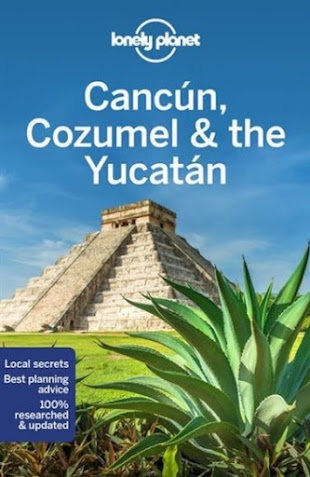