Tucker Carlson Alluded To A 20-Year-Old False Charge, But "Forgot" To Mention He Was Named In A Sexual Harassment Lawsuit Last July; Carlson Was "Pissed Off" After Gaetz Appeared To Implicate Him In Possible Sex Trafficking Crimes 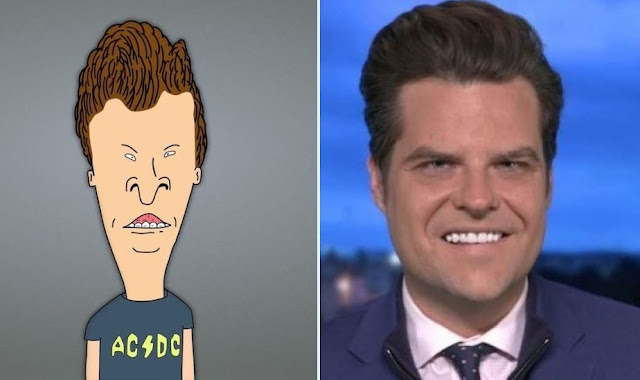 Last night, Florida representative Matt Gaetz (Q-Sedition) scampered into the welcoming arms of the Fox network to dissemble about the just-reported federal investigation into whether he violated federal sex trafficking laws. Gaetz maintained the report was some sort of extortion plot, though if Gaetz is as squeaky clean as he says, if he's innocent of all statutory rape and sex trafficking charges, over what exactly is he claiming he's being extorted?

Gaetz presumably went to Fox for a softball interview in which he could lie and deflect with abandon. I have no doubt he lied and deflected, but much of the interview careened wildly off the rails. At one point, Gaetz told Carlson: "I'm not the only person on screen right now who has been falsely accused of a terrible sex act. You were accused of something you did not do."

Carlson replied: "You just referred to a mentally ill viewer who accused me of a sex crime 20 years ago, and of course it was not true. I had never met the person."

Gaetz may not have been thinking of that false claim. It seems more likely that he was referring to a July 2020 lawsuit brought by two women alleging sexual misconduct against four Fox employees, including Carlson, Sean Hannity, Howard Kurtz, and Ed Henry.

The suit alleges Henry (the network's former chief national correspondent) manipulated and groomed an associate producer at Fox to be his "sex slave". He allegedly sexually assaulted her at work and raped her in a hotel. Fox fired Henry shortly after the suit became public.

A second woman, a regular guest on Hannity's show, alleges that in March 2018, Hannity sexually harassed her in front of the entire studio crew. In December 2018, Carlson made suggestive comments "probing to see whether [she] was interested in a sexual relationship".

Fox Chairman and CEO Roger Alies was forced to resign in 2016 after 23 women accused him of sexual harassment.

Whoa—Matt Gaetz has approached at least one criminal defense firm to represent him. Via CNN.

This Gaetz story is getting weirder by the minute. https://t.co/hFLa5h1dL2 pic.twitter.com/FweppJeGbC

New: Former Attorney General Bill Barr “was briefed on the Gaetz investigation multiple times” before he left office, according to a source familiar with the matter. The source said Barr did not object to the investigation. @PaulaReidCNN reporting

Tucker Carlson was angered after Matt Gaetz attempted to rope him into his scandal during their bizarre Tuesday night interview, I'm told. "It pissed him off," per source. https://t.co/xFrD3i6Ayj

The scandal that’s currently surrounding Florida congressman Matt Gaetz started less than 24 hours ago. And yet its twists and turns have already made it a case study in crisis mismanagement. https://t.co/hsPMQ7R6la

“A Fox News Media spokesperson said in response: ‘No one with any level of authority has had conversations with Matt Gaetz for any of our platforms and we have no interest in hiring him.’” https://t.co/f9NihFG59h

"I have no idea whatsoever why he would vote against that" -- McCarthy on Gaetz being only Republican to vote against an anti-sex trafficking bill in 2017 pic.twitter.com/h8gdou1kl4

Sorry, I still don’t feel like we’re appreciating all the insane aspects of the Gaetz story yet.

And I say that as someone who knew three years ago that he was dating a college student while in Congress.

“You and I went to dinner... I brought a friend of mine. You’ll remember her.” pic.twitter.com/eyV0o61vFZ

So he just made tucker a witness in the sex trafficking case.

For the first time ever, the confused look on Tucker's face actually fits the situation.

Matt Gaetz is being investigated for having sex with a 17 year old girl and sex trafficking her- so of course Hunter Biden is trending again.

What are we outraged about today, folks? pic.twitter.com/ggTGuDKUs8