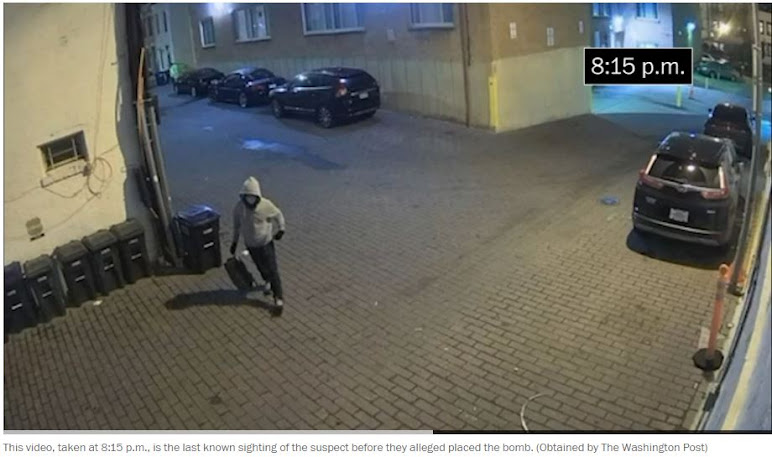 Pipe bombs found near Capitol on Jan. 6 are believed to have been placed the night before. We obtained exclusive footage showing the suspect in the moments before placing a bomb at the RNC. Our latest w/ @emmersbrown @SarahCahlan @jdawsey1 & @joyceslee https://t.co/SPk04KLPiQ

A video from around 8:15pm video shows the suspect carrying a backpack near his waist as they approach the area where the bomb was discovered on Jan. 6. According to the law enforcement official, this is the last known sighting of the suspect before the placement of the bomb. pic.twitter.com/Zo1bhsv7fZ

The two pipe bombs that were discovered on Jan. 6 near the U.S. Capitol shortly before a mob stormed the building are believed to have been planted the night before, according to a law enforcement official familiar with the investigation and video footage obtained by The Washington Post.
The explosive devices, which were placed blocks from one another at the headquarters of the Republican and Democratic national committees, have been largely overshadowed by the violent attempted insurrection at the Capitol. . . .
The FBI said its agents are "using every tool in our toolbox" and have interviewed more than 1,000 residents and business owners in the neighborhood where the devices were found. On Friday morning, the FBI released additional information that confirmed The Post's reporting about the timing of the placement of the bombs and raised the reward offered to $100,000. . . .
On Jan. 5 at 8:13 p.m., a security camera captured the suspect carrying a backpack, according to a resident who reviewed the footage and provided a copy to the FBI. The suspect was walking eastbound on C Street SE, headed toward an entrance to an alley that curved toward the Republican National Committee building. . . .
Seconds later, in video obtained by The Post, the suspect can be seen in the alley, known as Rumsey Court. The individual is wearing a light-colored sweatshirt and carrying the backpack near their waist, matching photographs that have been released by the FBI, and walking west past a row of homes. The suspect is believed to be walking toward the area behind the Republican National Committee building and the Capitol Hill Club to place the explosive device . . . [video at link]
Another video shows the suspect carrying a backpack near their waist as they approach the area where the bomb was discovered on Jan. 6. They appear to be wearing a mask and gloves. According to the law enforcement official, this is the last known sighting of the suspect before the placement of the bomb. . . . [video at link]
For unknown reasons, the suspect did not immediately leave the area. Another video obtained by The Post shows the suspect retracing their steps on Rumsey Court at 8:16 p.m., again walking westbound toward the RNC building. The individual is moving at a brisk pace and still carrying a backpack near their waist. [video at link]
One minute later, the suspect is seen walking eastbound on Rumsey Court — away from the area where the pipe bomb was discovered. They are wearing the backpack on their back. [video at link]
The same person is suspected of placing the bomb at the Democratic National Committee building, according to the FBI. . . .
Barry Black, a retired FBI special agent bomb technician, said . . . the individual could have been seeking to kill or injure, or could have simply wanted to "send a message" by targeting the nation's two largest political parties. Steven Sund, who resigned as chief of the Capitol Police in the wake of the riot, has said he suspects the bombs were an intentional effort to draw officers away from the grounds of the Capitol.
The bomb behind the RNC was discovered on Jan. 6 at around 12:45 p.m., about 90 minutes before rioters entered the Capitol. Resident Karlin Younger was on her way to do laundry when she spotted something unusual on the ground between a recycling bin and a rat trap. Younger said in an interview that she bent down to inspect the device, which was attached to what appeared to her to be a kitchen timer. The timer was set to 20 minutes, she said. She did not hear any ticking and could not tell if the timer was active. She alerted a nearby security guard . . .
The device was considered "live," meaning it contained viable explosive material . . . It was disarmed at the site . . . Around 1:15 p.m., officials have said, the second bomb was discovered several blocks away next to a bench outside the DNC. It, too, was live and was disarmed on site . . .

PIPE BOMBS FOUND: The FBI released more information about the pipe bombs found at the RNC and DNC headquarters during the Jan. 6 riots at the U.S. Capitol.https://t.co/o6w1nO4nYl pic.twitter.com/2dtuePCzLQ

He knew, they all knew. pic.twitter.com/QDoLEi2PHH

Tucker Carlson Fears Peaceful Protesters Outside His House While Dismissing
Violent Terrorists Inside The Capitol; Infantilizes Alexandria Ocasio-Cortez By
Calling Her "Sandy", A Nickname She Used In High School

Rudy Giuliani's Latest Theory Is Too Unhinged For Steve Bannon, Who Proposed
Beheading Dr. Fauci And The Director Of the FBI And Putting Their Severed Heads On
Pikes Outside The White House As A Warning To Those Who Speak Out Against Trump

That Steve Bannon is the voice of reason underscores how batshit fucking insane @RudyGiuliani is. https://t.co/zzaPVg1IP8

HERO: Kevin McCarthy single-handedly tracked down the mastermind behind the Jan. 6 terrorist attack and is making a citizen's arrest pic.twitter.com/SmZEWzUJnS