Let's Check In On The President Of The United States . . .
He's Still Ignoring A Pandemic He Deliberately Allowed To Kill 400,000 People (In Only 10 Months)
He Committed Sedition By Instigating An Armed, Violent Insurrection On The Capitol
He's Consumed With Rage And "Out Of His Mind" (According To A Long-Time Friend)
He's Facing The Prospect Of Being The Only President Impeached Twice (Almost In The Same Year!)
He's Working Harder At Trying To Get Back On Twitter Than He Has At Any Point The Last Four Years 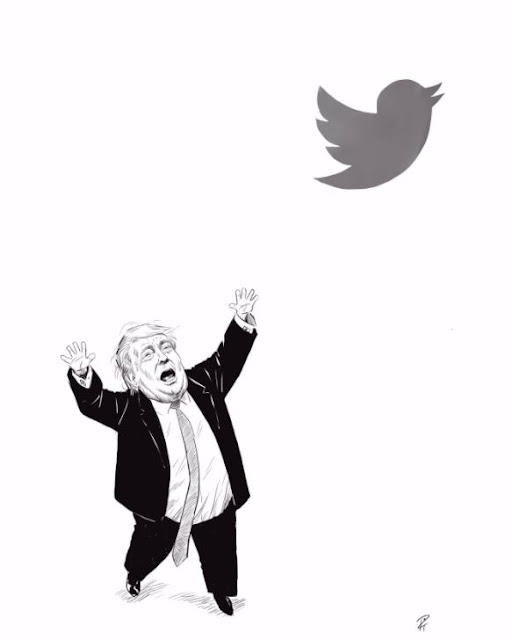 In dumping Trump, Twitter also stated it was on alert if Senor Sedition tried evading his ban by using government accounts.

NEW: Twitter tells me that if Trump tried to circumvent this ban by using @POTUS, the platform would remove these new postings. If Trump made a new account, that account would face a permanent suspension "at first detection," according to Twitter's rules. https://t.co/e9EUdps6QK

That was a wise decision. Trump used the official government account @POTUS "to rant about the social media giant supposedly being in cahoots with the 'radical left' to silence him and the 'patriots' who support him", as The Daily Beast reported. The tweets were deleted almost immediately.

Trump also announced he would have "a big announcement soon" because he's looking "at the possibilities of building out our own [social media] platform in the near future". I think that announcement will be in "two weeks" or right after "Infrastructure Week".

In one blink-and-you-missed-it tweet, Trump whined: "We will not be SILENCED! Twitter is not about FREE SPEECH." Trump was then immediately silenced.

But he was right. Twitter is not about free speech. Twitter is a private business, with a policy by which users must abide. If someone violates the rules, he can't use the service. Simple. No shirt, no shoes, no service.

The Frustrated Fuhrer tried using the @TeamTrump account, but it was suspended mere seconds after he posted.

Not obvious at all why they should remain private companies, unconstrained by the First Amendment

There cannot be too many high-profile individuals remaining in Trump's dwindling orbit who want to sacrifice their Twitter account so he can post once and have the tweet (and account) deleted in minutes. (Batshit insane lawyers Lin Wood and Sidney Powell have also been forever banned from Twitter; Wood (no relation) had two accountds banned. Showoff!

Google Play suspended Parler, a cesspool of MAGA cult members. Apple has demanded Parler moderate its content or it will be removed from Apple's App Store.

Happy schadenfreude night to all who observe.

Donald Trump has tried to tweet from the following accounts, they have either had their tweets deleted or been suspended. #TrumpBanned

After close review of recent Tweets from the @realDonaldTrump account and the context around them we have permanently suspended the account due to the risk of further incitement of violence.https://t.co/CBpE1I6j8Y

#TrumpBanned to mitigate “risk of further incitement of violence” pic.twitter.com/whiqCsJQvM

"As someone in Trump's inner circle put it to me just in the last few minutes: Losing his Twitter account probably hurts the president more than his impeachment."@JonLemire calling Trump's Twitter account 'the life blood of the Trump presidency.' #theriedout pic.twitter.com/Tz28XWeToA

I just want to point out that the White House seems to be mobilizing faster in response to Trump’s Twitter account being removed than they did to the violent insurrection Trump incited at the Capitol on Wednesday.

Donald Trump’s twitter suspension really just shows that they could have done this 4 years ago but chose not to until he stopped being profitable & powerful. Instead, they allowed hatred to spread openly and a continuous incitement of violence. It’d be good to remember that. pic.twitter.com/gLb5HcUgP3

@POTUS
(Still active, but all tweets from January 8-20 will be deleted)

He’s him trying to take over @POTUS and twitter shut that sh*t down! pic.twitter.com/HWz7lii3Br

Twitter tells @b_fung that it has banned Trump’s @teamtrump campaign account because the president tried tweeting there tonight after his own account was banned and his attempted tweets were swiftly deleted from the government @POTUS account.

I believe there are more than a couple of message boards out there with discussion of advance plans for this thing (think TheDonaldDOTwin was where this came from?). Little to no reason to believe people close to DT wouldn’t have accounts here - hell, they could have advised: pic.twitter.com/iJFmaV6JJu 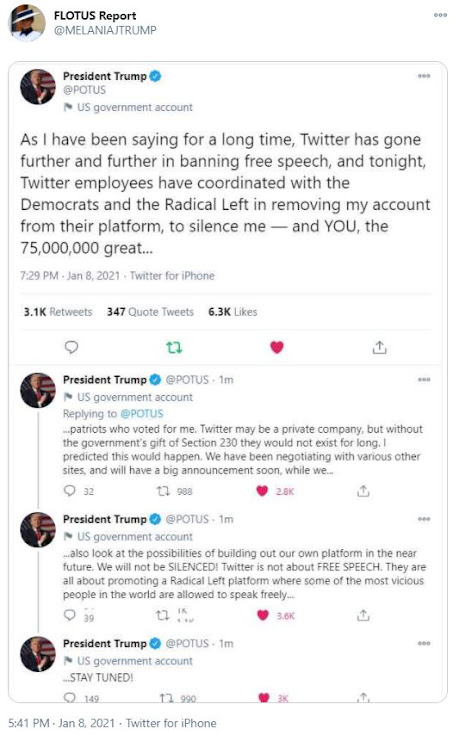 This was up for less than 5 minutes before they suspended the account. pic.twitter.com/QdwUFSpdDj

It's here. Track account suspensions related to Trump's whack-a-mole on Twitter at this dashboard, part of a series of trackers on Trump's final days (including resignations and calls for the president's removal). Will be updated with new reports.https://t.co/2ZOeJ9GPwp pic.twitter.com/NltLxxxCuA

Thinking back to this story about the guy who used to handle Trump’s social media accounts finding out that Trump learned how to send tweets.

He compared it to the raptors in Jurassic Park learning how to open doors. https://t.co/939YbWmrU6 pic.twitter.com/fq8WI5TWbf 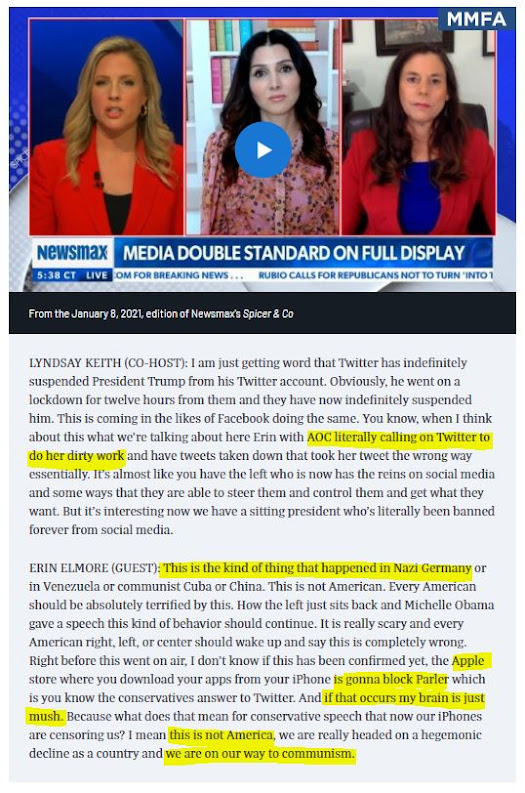 Hannity tonight devoted an entire segment of his show to trying to debunk a satirical tweet alleging he lost his lifetime pasta pass at Olive Garden https://t.co/ld53bPZOEA pic.twitter.com/pChSdFNMTy

Melania Trump was too busy overseeing a rug photoshoot to concern herself with the insurrection https://t.co/ZjUgEPhttM

It's almost funnier to keep Rudy tweeting "What happened to POTUS?" 🤣https://t.co/rNcGMZVamH

Nah, hamburgers is spelt correctly. Couldn't be the Don.

Are we sure this is parody? pic.twitter.com/pMMHk03yrZ

And then one day he just disappeared.
Like a miracle. pic.twitter.com/oYHrC6b5uV

Before Trump heads to Parler... pic.twitter.com/0I5p1gwQIo

We know one thing he WON'T be doing.