Near-Total Media Blackout Of Multiple Bombs, Automatic Weapons, Ammunition Caches, And Accelerants Found In Capitol During Riot
Media Reports Long-Time Friend Questions Trump's Mental Health: "He Is So Traumatized By His Loss In The Election. He is Out Of His Mind."
Pelosi Calls For Trump's Removal After He "Incited An Armed Insurrection Against America"; Also Says He's "A Complete Tool Of Putin" 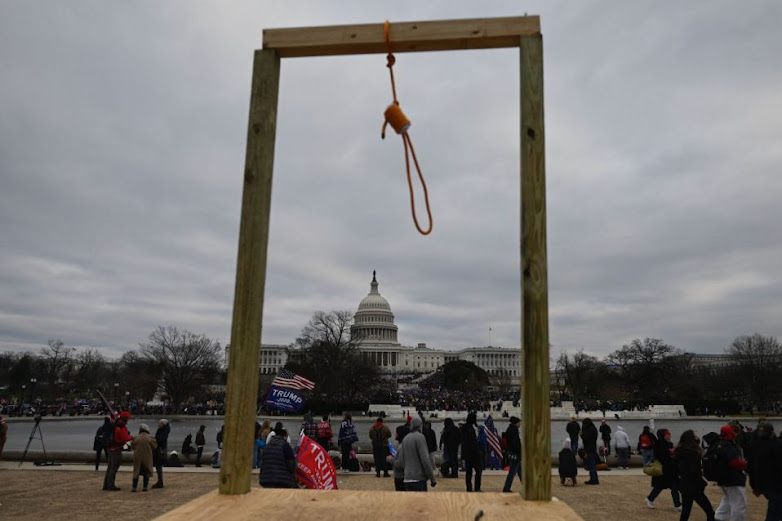 I find it incredibly telling that this photo hasn’t gone viral. And almost no one is mentioning the bombs, ammunition, and accelerants that were found. They were literally calling for Nancy Pelosi’s head and said they were going to take hostages. This wasn’t a peaceful protest. pic.twitter.com/4KIyNUNVtO

Two suspected homemade bombs were found near the RNC and DNC headquarters on Wednesday. A pickup truck parked across the street from the RNC office (and near the entrance to a Metro station) contained rifles and shotguns and a lot of ammunition.
A cooler containing a long gun and Molotov cocktails was seized at the Capitol. Four rioters were arrested for carrying pistols without licenses and one was arrested for possession of prohibited weapon.
Pelosi Calls Trump "A Complete Tool Of Putin" And Says He Should Be Removed From Office ASAP

Pelosi begins her news conference by saying, "Yesterday the President of the United States incited an armed insurrection against America." pic.twitter.com/zwSpuWFkLS

"I join the Senate Democratic leader in calling on the vice president to remove this president by immediately invoking the 25th amendment. If the vice president and cabinet do not act, the Congress may be prepared to move forward with impeachment." -- Pelosi pic.twitter.com/tGdFSbNBMs

"A complete tool of Putin, this president is. Putin's goal was to diminish the view of democracy in the world. That's what he has been about ... the president gave him the biggest, of all of his many gifts to Putin, the biggest yesterday" -- Pelosi pic.twitter.com/HP9fHuSuXQ

"While there are only 13 days left, any day could be a horror show for America" -- Pelosi pic.twitter.com/1jFtYneIIp

Pelosi says she's calling for the resignation of the chief of the Capitol Police and has been informed that will happen pic.twitter.com/0TtkENWEmm

Pelosi on Trump: "This man is deadly. To our democracy, and to our people." pic.twitter.com/VPNwjzT44J

"In terms of the inauguration ... I don't trust whatever the president might have in mind, because I think he's a very dangerous man" -- Pelosi pic.twitter.com/nXw1HKp5Ch

Trump has committed an assault on our nation and our people.

Pence must remove him and invoke the 25th amendment. If they fail to act, we may be prepared to move forward with impeachment.

Justice will be done to those who carried out these acts of sedition and cowardice. -NP pic.twitter.com/NG6bJLts2l

Lindsey Graham says all of Trump's accomplishments are "tarnished" by yesterday's riots pic.twitter.com/56dSxzwEF7

Graham points out that "the president is frustrated" as if that justifies an attempted coup pic.twitter.com/YIPAofgJv8

"I would like to see President Trump help unify the country" -- Lindsey Graham (R-Fantasyland) pic.twitter.com/U5aLAXUyxA

I would like to see a big box filled with $500 million be delivered to my doorstep by 9:00 PM tonight.
Kayleigh Is Still Not McEnany-Sense

He...said he loved them and that they're very special. Yesterday. https://t.co/znqW4Odrre

JUST NOW: Kayleigh McEnany just held a press conference with a brief nothing statement on the #CapitolRiots, then ran out before answering a single question.

Because she's run out of lies?

Terrorism is defined in the Code of Federal Regulations as “the unlawful use of force and violence against persons or property to intimidate or coerce a government, the civilian population, or any segment thereof, in furtherance of political or social objectives” (28 C.F.R.

Let's start with this MF'er right here.
Meet Richard 'Bigo' Barnett or alias George Reincarnated Patton (as he posts on facebook).
This self avowed white nationalist got a nice big fat PPP loan and plans to run for Governor of Arkansas in 2022. #CapitolRiots pic.twitter.com/NxyqqcF8UK

It was. I got the screenshot. pic.twitter.com/64LfU3LK2F

Adam Johnson of Parrish, Florida has been identified as the man caught in a viral photo stealing a lectern from the U.S. House during Wednesday’s violent mob attack on the Capitol. Why hasn’t he been arrested? pic.twitter.com/QoClQybCT5

People keep picking on this guy, but in my eyes, he was just a regular guy that finally took a stand.

He's married to Dr. Suzanne Johnson of DaVita Medical. Not sure this is the type of review she was hoping for. pic.twitter.com/08S9DXdph1

Feel free to walk into Dr Johnsons office and pick up any piece of furniture you like and walk away with it.

Is it just me or do all the rioters from yesterday look like they’re part of that white trash meth gang from season 5 of Breaking Bad? #MAGA #CapitolRiots pic.twitter.com/d3eGh8KRQj

It's fascinating, in the middle of a pandemic where most of the country has been wearing a mask, an easy way to make it harder to identify yourself, the far right is so anti-mask as to deliberately make identification easy and make transmission of the virus easy, I am impressed

Thx for help of many folks here! esp @JohnHultquist pic.twitter.com/OuQ6wGY9fW

Many have asked. I have referred Male #2's name and details to the @FBI and will not be naming him right now.

However, I believe you should know that his bio includes:
-longtime security clearance
-graduate of a military academy
-Senior officer's rank at retirement pic.twitter.com/J9z68MHOxv

This person is wearing a hat from Black Rifle Coffee Company, the same company that was criticized after photos popped up on social media of Kyle Rittenhouse rocking their gear and posing with a podcaster who BRCC sponsored. https://t.co/7UgkXqNO8a pic.twitter.com/NglEfJWWDf

This is an automatic weapon. A still shot in the video when the woman was shot. He is pointing it at the capitol police pic.twitter.com/WHJFkLKDaP

Also: they were screaming for Pence to “come out.” Lin Wood called for Pence’s death yesterday.

They were hunting Pelosi and Pence which is why that woman got shot at the entrance to the Speakers Lobby.

QAnon Believers Were Part Of Mob That Stormed The Capitol https://t.co/MYcb5hVg9r via @katienotopoulos

I completely agree and with this outside the Capitol at the time pic.twitter.com/spVNYzKJEU

I don't know who needs to hear this, but you can't call it a peaceful protest while also calling it a CIVIL WAR.

One or the other, but you can't have both. pic.twitter.com/zsFIUYP0Zu

I read a bunch of the charge sheets and interviews today of the terrorists arrested yesterday and today. Every one of them turns into crying little babies when actually faced by consequences for their actions.

Charge The Police, Too

BREAKING: U.S. CAPITOL POLICE INTENTIONALLY TURNED DOWN HELP FROM DOD AND THE FBI TO SECURE THE CAPITOL FROM TERRORISTS 😠 https://t.co/aMPaGSckdF

Surprised he wasn’t handing out tourist maps so they could find their way around better.

Retired NYPD Detective Marq Claxton: "Let's recognize that there is complicity on the part of law enforcement when dealing with white domestic terrorists ...You can't be that bad without it being intentional." https://t.co/exFsRnzOBs

Chicago Police Union President John Catanzara expresses support for the MAGA terrorists who stormed the US Capitol in an act of insurrection and sedition yesterday, a group filled with white supremacists, saying they had a right to express “frustrations.”

He should be fired.

Damage is already done. This was on Fox News all last night. Spoken about by Matt Gaetz on the floor of the House last night. It was all transparent lies. And they'll just keeping doing it. https://t.co/PxOwWaNV6o

Bill Hemmer is apparently trying to nitpick "storming the Capitol" as the correct phrase to describe what happened yesterday. Smh. Talk about a hill to die on. https://t.co/lVoeMUZagh

Scarborough: But then Trump supporters come in and you open the fucking doors for them pic.twitter.com/FgBmufDbeu

Pro Tip: if you are running late for plane and need to get thru security in a jiffy, show up with. Trump Flag and you’ll get a police escort to your seat.

CNN's Jim Acosta made a startling statement while covering the insurrection riots in DC. A source very close to Donald Trump, someone who has known him for a "very long time" is questioning his mental status. It is not surprising, but it is alarming.

Now, I talked to a separate source close to the White House, an adviser to the President. When I asked this adviser about the prospect of invoking the 25th Amendment and forcing the President from power with his Cabinet coming together and saying he's no longer fit to be President of the United States, this adviser said because the President has installed so many lackeys in the Cabinet – of course, the President always has loyalists on his Cabinet but there are lackeys on his Cabinet, including acting Secretaries who have been installed recently – that it's just unlikely, the probability of that happening is just not going to happen.

And in the words of this adviser, "I just don't think the Cabinet is going to invoke the 25th Amendment", but it is interesting, Jake, and according to this adviser, aides and allies of the President have been having these kinds of conversations about whether or not the 25th Amendment's time has come when it comes to Donald Trump. But you don't want to get into that kind of conversation when talking about the President of the United States. You don't take pleasure in that as a reporter, using that kind of language. But when a source close to the President – and this is a source who has known the President a long time, talks to him a lot – says he's out of his mind, I think that is serious, Jake.