Tucker's Researchers Spent All Day Online, Failed To Find Anything On QAnon: "It's Not Even A Website" (David Duke Told Trump Last July To Dump Pence And Have Carlson As VP) 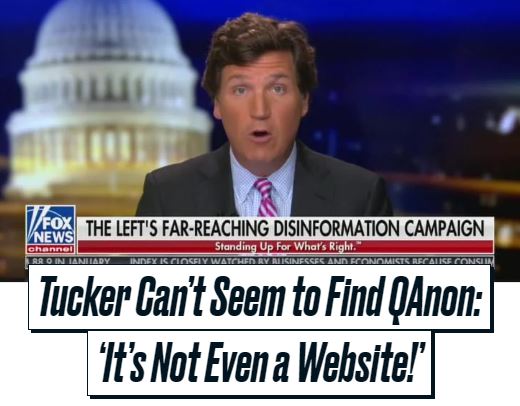 We spent all day trying to locate the famous QAnon, which, in the end, we learned is not even a website. If it's out there, we could not find it.
Then, we checked Marjorie Taylor Greene's Twitter feed because we have heard she traffics in disinformation, CNN told us, but nothing there. Next, we called our many friends in the tight-knit intel community. Could Vladimir Putin be putting this stuff out there? The Proud Boys? Alex Jones?
Who is lying to America in ways that are certain to make us hate each other and certain to destroy our core institutions? Well, none of the above, actually. It wasn't Marjorie Taylor Greene. It was cable news. It was politicians talking on TV, they're the ones spreading disinformation to Americans. Maybe they are from QAnon.

TucKKKer and his "research" team apparently have no clue that Fox News's website features a page dedicated to what you should know about the QAnon conspiracy.

QAnon: What to know about the fringe conspiracy theory and its influence
The QAnon movement started online in 2017
https://www.foxnews.com/politics/qanon-what-to-know

The Fox News host said he and his team spent "all day" trying to locate the conspiracy theory. https://t.co/9vkYZpyvzs

Tucker Carlson can’t seem to find QAnon: “It’s not even a website!” https://t.co/MipQnEpUJk

Tucker Carlson spent "all day trying to locate the famous QAnon" and found nothing https://t.co/WEiS5Tg4io

What @TuckerCarlson is acknowledging here is that he’s a fucking moron who can’t navigate the internet. https://t.co/YdGcxlDi4o

Before he resigned in disgrace, Tucker Carlson's top writer was an active member of popular Qanon message boards like 4chan and 8chan. Tucker should've just called him. https://t.co/enb4XM1C1Q

David Duke, the former leader of the Ku Klux Klan (KKK), is calling for President Donald Trump to nominate the talk-show host Tucker Carlson as his vice president.

The former KKK Grand Wizard urged Trump to pick the Fox News host as his next in command instead of Mike Pence in order to "save America." . . .

The white supremacist added that having Trump and Carlson in the White House is the only way to "stop the commie Bolsheviks."

"President Trump! You have one last chance to turn the tables, win this election and save America—and yourself ! Nominate Tucker Carlson for Vice President. This would energize your campaign beyond belief," Duke tweeted [from his now-deleted-and-banned account].

Tucker Carlson last night: “There is no evidence that white supremacists were responsible for what happened on January 6. That’s a lie"

Tucker Carlson has the questions 𝒂𝒏𝒅 the answers in “𝐓𝐮𝐜𝐤𝐞𝐫 𝐉𝐞𝐨𝐩𝐚𝐫𝐝𝐲!”pic.twitter.com/6nX128v5ck

Trump calling into cable news to give his take on Tiger's car crash is the exact level of responsibility and power the man should have.