The title of this post, which is also the headline above Dana Milbank's Washington Post column, sums everything up.

As [Trump's] marauders sacked the Capitol on Jan. 6 in their bloody attempt to overturn the election, House Republican leader Kevin McCarthy called the then-president and pleaded for Trump to call off the attack.
Trump refused, essentially telling McCarthy he got what he deserved. Trump was, in effect, content to let members of Congress die. . . .
When McCarthy "finally reached the president on January 6 and asked him to publicly and forcefully call off the riot, the president initially repeated the falsehood that it was antifa that had breached the Capitol," [Rep. Jaime Herrera Beutler (R-Wash.)] wrote. McCarthy, she continued, "refuted that and told the president that these were Trump supporters. That's when, according to McCarthy, the president said: 'Well, Kevin, I guess these people are more upset about the election than you are.'" . . .
Even knowing this, most Republican senators, as long expected, voted to acquit Trump, a craven surrender to the political imperative not to cross the demagogue. But the impeachment trial was not in vain, for it revealed the ugly truth: Trump knew lawmakers' lives were in danger from his violent supporters, and instead of helping the people's representatives escape harm, Trump scoffed. . . .
On the Senate floor, Trump counsel Michael van der Veen, a personal-injury lawyer by day, tried in every way to demonstrate his indignation at [Beutler's] late revelation. He shouted. He growled. He gesticulated madly. He pounded the lectern. He stomped. He spat out words: "Antics." "Rumor." "Report." "Innuendo." "False narrative!" He actually declared that "it doesn't matter what happened after the insurgence into the Capitol building." So what if Trump scoffed at McCarthy's desperate entreaty to save lawmakers' lives? . . . [Van der Veen] howled about due process and fairness being "violently breached" — interesting words, given what his client did.
When the yeas and nays were counted, seven Senate Republicans joined Herrera Beutler in her courageous stand, voting along with all 50 Democrats to convict Trump. The other 43 Republicans, some of whom, like McConnell, feebly denounced Trump’s conduct even as they acquitted him, now have the cowardly distinction of licking the boots of the man who left them to die.

An Important Point: If the insurrectionists were not following Trump's explicit commands, as Republicans tried to claim, why did so many of them call Trump directly and beg him to call off the mob?
On January 6, Republicans knew the armed mob was Trump's personal MAGA army.
By January 7, however, after happily guzzling a cold glass of Kool-Trump-Aid, they had no use for reality.
And what about the Democrats? They wilted in front of the Trumpists like a paper hat in a hurricane because having the testimony of witnesses allegedly would not change any votes (an admission that the trial was merely the Senate going through the motions; why did they bother showing any videos of the attack if no one was changing his or her minds?) and because, according to one Democrat, they wanted to be home for Valentine's Day rather than dealing with a president who incited his fascist armed mob to commit a terrorist attack on the Capitol and attempt the mass murder of the Vice President, Speaker of the House, and other lawmakers in order to overturn the results of a fair election.
Priorities, people!

"The country was ready to see him finally held to account. Democrats failed to do that," says Alexander Heffner. https://t.co/zA2OWpMzSs

The more I think about it, the more “People want to get home for Valentine’s Day” might be the most embarrassing line in the history of politics. https://t.co/TZf98ARAZj

The house could have done their job, had witnesses and depositions. They chose to half@ass it and this is the result

I’m a Democrat but I don’t want stand for what this party stands for right now: elite comfort with the status quo, the conviction that we’re smarter than voters, the idea that boldness is naïveté, and that the best solution to right-wing terror and radicalism is compromise.

Who knew that Valentines Day was really that important to Democrats. You never stop learning. 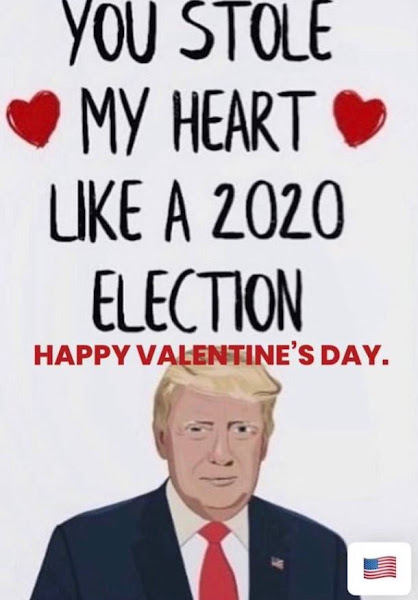 The US coronavirus death toll will pass 500,000 today or tomorrow.

Amid a deadly pandemic and economic carnage, Jim Jordan says "cancel culture" is "the number one issue for the country to address today" pic.twitter.com/XqzMy7yRdC

“Now that Republicans have passed up an opportunity to banish him through impeachment, it is not clear when — or how — they might go about transforming their party into something other than a vessel for a semiretired demagogue”https://t.co/7Ub4vC214U

Sen. Murphy on Sasse denouncing "tribalism" on both sides: "I do think that this cult of personality that's been built up around President Trump is fundamentally different ... something has happened inside the Republican Party in which they have decided to abandon democracy." pic.twitter.com/ikxP6AhMRq

This is a crucial point. The end result of Trump's impeachment trial was rigged because a critical mass of Republican senators never was going to convict him. https://t.co/HWCLFceBJH

Lindsey Graham suggests Kamala Harris will be impeached if Republicans take back the House next year pic.twitter.com/J68Or4k1la

Impeachment manager Madeleine Dean: "It was puzzling to hear and see Mitch McConnell stand and say 'not guilty' and then minutes later stand again and say [Trump] was guilty of everything. History will remember that statement of speaking out of two sides of his mouth." pic.twitter.com/Tj3fs3QMVq

There is another way to test McConnell: Democrats could bring a bill or a resolution to affirm, according to the 14th Amendment, Section 3, he's ineligible to hold office because he engaged in “insurrection” or had “given aid or comfort” to those who did.https://t.co/3jyfezXIIn