Spineless Democrats Cave, Suddenly Surrendering To Republicans And Refusing To Call Witnesses Immediately After Winning A Vote In Favour Of Witnesses; Trial Sputters To An End, With Trump Acquitted 57-43 (Only Seven Republicans Vote To Convict)

In the end, Democrats will always Democrat.

After securing a vote on Saturday to call witnesses (55-45) in the second impeachment trial of former president Donald Trump, the House managers executed a "head-spinning" U-turn, backing down and agreeing with Republicans to not have any witness testimony.
Shortly thereafter, the Senate voted 57-43 to acquit Trump on the charge of inciting the January 6, 2021, insurrection at the US Capitol building. (Still, even without a conviction, it was the most bipartisan vote in favor of convicting a president at an impeachment trial in US history.)
Senate Minority Leader Mitch McConnell said: "There's no question — none — that President Trump is practically and morally responsible for provoking the events of the day. . . . [Trump's supporters committed the assault] because they had been fed wild falsehoods by the most powerful man on Earth, because he was angry he lost an election." . . . The two-faced McConnell, in sharp contradiction to those words, voted to acquit Trump.
House Speaker Nancy Pelosi spoke out against "a cowardly group of Republicans who . . . were afraid to defend their job, respect the institution in which they serve. What is so important about any one of us? What is so important about the political survival of any one of us than the Constitution we have sworn to protect and defend?" . . . She could have easily been addressing herself and her own party. 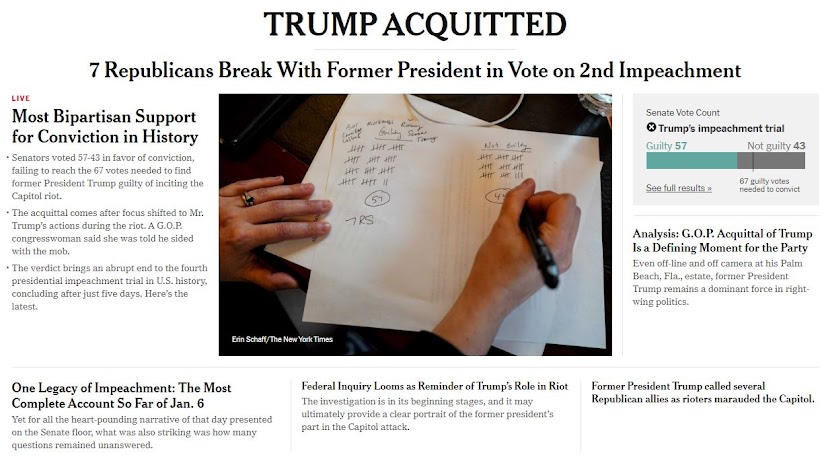 While additional testimony would not have changed any Trumpist's vote (their minds were set in concrete well before the Capitol attack even happened), witnesses could have provided essential details — on the record and to the American people — about what law enforcement saw and heard that day,  what Trump did after his speech encouraging the mob to attack the Capitol (and the members certifying the electoral votes), how gleeful and excited Trump was as he watched the scenes of violence on television, and what actions he took (or refused to take) as the attack continued.
Instead, the gutless Democrats were reportedly suddenly concerned that having witnesses (which they had just finished fighting for!) would take too much time. So, in the end, despite all their talk of the threat to the republic, their main goal was to get this whole thing over with as soon as possible. 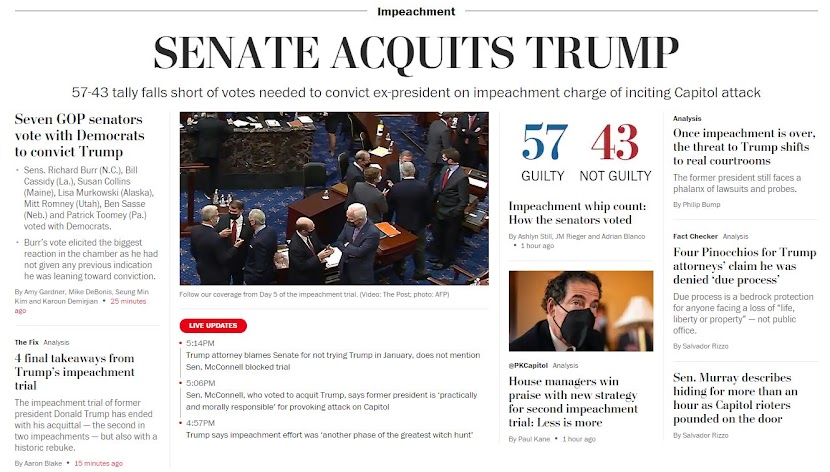 Minutes after the verdict was announced, Mr. Trump sent out a statement thanking his legal team and decrying, as he did for most of his presidency, the "witch hunt" he says is being waged upon him by his enemies.

"It is a sad commentary on our times that one political party in America is given a free pass to denigrate the rule of law, defame law enforcement, cheer mobs, excuse rioters, and transform justice into a tool of political vengeance, and persecute, blacklist, cancel and suppress all people and viewpoints with whom or which they disagree," he wrote, echoing the final arguments of his lawyers in the Senate on Saturday.

"I always have, and always will, be a champion for the unwavering rule of law, the heroes of law enforcement, and the right of Americans to peacefully and honorably debate the issues of the day without malice and without hate."

He also suggested that the Democrats' attempt to end his political career had also failed, telling his supporters, "our historic, patriotic and beautiful movement to Make America Great Again has only just begun."

Trump's "pro bono" lawyers continued their emulation of their profoundly stupid client to the bitter end, mispronouncing words (Philly-adelphia) and exhibiting no understanding of how Senate trials work (their threat to issue subpoenas was met by loud laughter from (reportedly) both sides) or the difference between a Senate impeachment trial and a civil criminal trial.
They also spewed a constant stream of lies, projections, and contradictions, stating that Trump was not granted a fair trial (Neguse's rebuttal: "You can't claim there's no due process when you won't participate in the process"), charging the House was withholding evidence when they were the ones refusing to allow their client to give testimony, claiming if Trump was so dangerous, the Senate should have held the trial in January (ignoring the fact Mitch McConnell colluded with Trump to ensure that did not happen), and admitting there was a violent insurrection on January 6 after claiming "clearly, there was no insurrection".


The Trump Defense Team was AGAINST the insurrection being an insurrection before they were FOR it https://t.co/qZ5b0K0aFV pic.twitter.com/ZBLN3eieMT

Raskin points out their conflicting statements on insurrection pic.twitter.com/NbtrpKyU0O

van der Veen explains that if House managers want witnesses, then "I'm going to need at least, over 100 depositions"

"Do not handcuff me by limiting the number of witnesses I can have," he angrily says. "We should close this case out today." pic.twitter.com/3vcjmDG4Vz

A moment of levity as Trump’s lawyer says something so ridiculous that they U.S. Senate starts laughing at him.

“I don’t know why you’re laughing”

Folks, the laughter here sure sounds like it’s coming from both sides of that Chamber. https://t.co/3fUnY8PsS2

He can't subpoena anyone, the Senate issues subpoenas and sets the grounds for the depositions. That's why they were all laughing.

McConnell condemns Trump’s actions despite voting to acquit him pic.twitter.com/VkkhFzzSCz

McConnell: If President Trump were still in office, I would have carefully considered whether the House Managers proved their specific charge pic.twitter.com/zCoNGfQKxQ

“Anyone decries his awful behavior is accused of insulting millions of voters. That’s an absurd deflection” pic.twitter.com/KtHpImU31V

Trump: “I could stand in the middle of Fifth Avenue and shoot somebody and I wouldn't lose any voters.”

GOP Senate: "Trump could stand in the White House and target his VP for assassination and he'll only lose 4 Republicans."

The five Republicans now who voted AYE on witnesses:

There will be witnesses. pic.twitter.com/1L0KskJ2m6

55-45, the Senate will proceed with witnesses in the second impeachment trial of Donald Trump.


In a surprise twist on Saturday, the House managers made an abrupt demand to hear from witnesses who could testify to what Mr. Trump was doing and saying during the rampage. The Senate voted to allow it, but the prospect threatened to prolong the trial by days or weeks without changing the outcome, and in a head-spinning move, the prosecutors quickly dropped it.

After a flurry of closed-door haggling with Republicans, they agreed with Mr. Trump’s lawyers to admit as evidence a written statement by a Republican congresswoman, Representative Jaime Herrera Beutler of Washington, who has said she was told that the former president sided with the mob as rioters were attacking the Capitol.

And @brianschatz says it's his "understanding" that managers and Trump lawyers have agreed to admit JHB statement and close.
"my view is that this is between the counsel and if they have an agreement that we should ratify it"

For as many videos as we saw of the word "fight" yesterday, Democrats are really bad at fighting.

JHB’s statement is public and already permissible in the impeachment record. The proposed stipulation to admit the account into the record and simply move on is nonsensical and a profound waste of time (and vote). Call live witnesses. @StaceyPlaskett @RepRaskin

After fighting for witness testimony, Democrats have caved and Trump's #ImpeachmentTrial will end without it. Baffling. pic.twitter.com/swgu1MCHyd

Raskin should honestly save our Saturday afternoon and just end his speech right now. We've been subjected to enough rhetoric this week. Nothing he says at this point matters.

This is a bullshit move. There is no reason not to use the power of a bi-partisan majority to lay this shit on the table for all to see.
I didn’t think there would be a way to “both sides” this trial. I was wrong- if Dems accept this shit, BOTH sides have betrayed America

Wining a key vote to *call witnesses* -- and then not actually calling any witnesses -- would mark quite the reversal by House Managers at the most pivotal point in the trial of Donald Trump.

It’s what Americans are taught when given their Apple Pie and Baseball at birth.

Trump's lawyers spent a good chunk of the trial arguing that news reports are unreliable, so now Democrats are going to cave just so a news report can be entered into the record? Whew.

Here's Trump's lawyer attacking the reliability of news reports after Democrats used their leverage earlier today just so they could introduce a news report into the record pic.twitter.com/rXa04gbPw3

The families of the dead deserve more than a fucking statement.

In 2022, when the Dems lose the house and senate and are utterly confused as to why, they have something to look back on. There will be a few other reasons but this is one.

The continued gutless actions by Dems are not surprising..
This was completely expected. Its what they do. Every. Damn. Time.