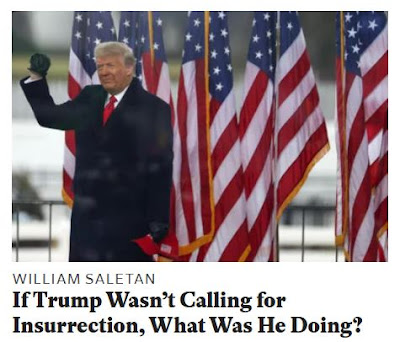 If Trump Wasn't Calling For Insurrection, What Was He Doing?
William Saletan, Slate, February 11, 2021

Donald Trump's lawyers face a challenge as they begin his defense at this week's Senate impeachment trial. House prosecutors have made the case that Trump, in his Jan. 6 speech to a crowd in Washington, D.C., incited the insurrection that followed. Trump's lawyers deny that the insurrection was what Trump intended. But in that case, they need to offer a plausible alternative. If Trump wasn't directing the mob to attack or threaten Congress, what was he telling it to do?

[Recap of Trump's lawyers' lies]
By rejecting every nonviolent option that could have ended the election dispute, he drove his supporters to violence. . . . He denounced every court, including the Supreme Court, that rejected his election challenges. When the FBI and the Department of Justice found "no evidence of widespread voter fraud," he denounced them too. He told his followers to ignore state-certified ballot counts and the Dec. 14 vote of the Electoral College. As lawful options were exhausted, Trump continued to demand that the election be overturned. The conclusion was inescapable: He wanted action outside the law.

The president made clear that these actions would have to be taken by citizens, because public officials had failed. He urged his supporters to come to Washington on Jan. 6, when Congress was scheduled to certify the electoral vote, because Republican senators lacked the courage to block certification. On Jan. 4, he told his followers that it was their job to "fight like hell" and make sure the certification didn't happen. On Jan. 5, he vowed that they would "inundate" Washington and galvanize Republicans. The mission of the mob, as he described it, was to intimidate Congress.

In his speech to the crowd on the morning of Jan. 6, Trump inserted a token line about protesting "peacefully." Hardcore Trump fans knew he often sprinkled that line in speeches as a joke. Then, over the next hour, Trump foreclosed every peaceful option. He called Joe Biden's victory illegitimate. He dismissed the Supreme Court as biased and hostile to the country. He told his supporters to suspend the usual rules of election acceptance, urged them to counter the left's "ruthless" power grab, and warned that if Biden were inaugurated, "our country will be destroyed." By the end of the speech, his meaning was obvious: Violence was justified and necessary. An hour later, as insurrectionists surrounded the Capitol, he tweeted that the last nonviolent option—intervention in Congress by Vice President Mike Pence—had failed.

Trump's behavior during the attack erased any doubt about his intentions. . . . White House officials said he was "pleased," "delighted," "excited," and "borderline enthusiastic because it meant the certification was being derailed." When the assault was over, Trump gloated. "These are the things and events that happen when a sacred landslide election victory is so unceremoniously & viciously stripped away from great patriots," he tweeted. "Remember this day forever!"

Trump made clear what he wanted. He declared that the country was in mortal danger and that officials who stood in his way were enemies of the people. He told his followers that every legal option had failed them and that every institution was rigged against them. He warned that the putative winners of the election were ruthless, and it was "time somebody did something about it." He scoffed that Congress, without pressure from the streets, would never do the right thing. If these messages weren't a call for insurrection, what were they?

.@SenWhitehouse joins @Lawrence to discuss how the Capitol riot was fueled by a network of Republican support and the possibility of “some connivance” to create a delay that gave the mob enough time to breach the Capitol. pic.twitter.com/hGo46REhsK

Whoa. Sheldon Whitehouse suggesting some GOP senators delayed certification so the mob had time to show up. I repeat, whoa.

100% believable, I bet that's why sycophant Mike Lee is freaking out. They need to subpoena Lee's spokesperson. pic.twitter.com/QbGS3tCLn5

This is exactly what we heard in a voicemail Rudy Giuliani thought he was leaving for Tommy Tuberville. He said, we just need you to slow things down, maybe even until tomorrow.

As Ted Lieu said, Trump had run out of non-violent options to stay in power.

Meanwhile Trump's flunkies in the Pentagon were holding up deployment of the National Guard. Not a coincidence.

this is a real ad running on Newsmax pic.twitter.com/FRZUpueQGl

(Note: the Supreme Court has not ruled on this matter) pic.twitter.com/LQkT6LOERo

Ask her why she took her kids out of DC the day before January 6th! She knew violence was coming, she has said so. I thought she was a step above the rest of the GOP in the immediate aftermath of the 6th, but she is just more of the same.

Democrats are using Trump's tweets as evidence that he is the sole person responsible for inciting the riot. pic.twitter.com/OZjQS9Iqrv

Here's a video montage of Trump praising violence from his supporters pic.twitter.com/djL5d4TWwS

Raskin details how Trump responded to a kidnapping plot targeting a frequent target of his abuse, Gretchen Whitmer, by continuing to attack her pic.twitter.com/1Cl4kBE9VH

"He could not bring himself to publicly oppose a kidnapping and potential assassination conspiracy plot against a sitting governor" -- Raskin pic.twitter.com/gSaMnlMECK

"Is there any political leader in this room who believes that if he is ever allowed by the Senate get back into the Oval Office, Donald Trump would stop inciting violence to get his way? Would you bet the lives of more police officers on that?" -- Raskin pic.twitter.com/4C2C8DDtyI

Ted Lieu points out that Trump still hasn't conceded the reality that the election wasn't stolen from him.

"That is why National Guard troops in full body armor still patrol outside," he adds. pic.twitter.com/aXQLxtj8Do

i had forgotten that Trump retweeted a guy who said "the only good Democrat is a dead Democrat" pic.twitter.com/EZlXLfsyfl

From the people who brought you Blue Lives Matter pic.twitter.com/DWEvYsKo9U

To all of those police departments he used as campaign props and especially that “great” Sheriff in Greenville... here ya go! He supports you, until he doesn’t.

CNN’s @mkraju popped into the chamber and in his time there he saw 15 empty GOP seats as impeachment trial continues.

If true the Constitution explicitly instructs that they are ineligible to serve per the 14th Amendment, Section 3 https://t.co/vUKltBPA97

Castro: "Every foreign adversary considering attacking this building got to watch a dress rehearsal and they saw that this Capitol could be overtaken." pic.twitter.com/QWxzpsDH5S

This must've been what Pyongyang TV was like when Kim Jong-il passed https://t.co/iluoeTdnkb

Paul then completely dodged a question asking him to respond to the clear link between Trump’s rhetoric and the January 6 insurrection pic.twitter.com/vNNpfxwWEh

People are forgetting how much of the US COVID crisis was aggravated by the malice of Trump administration, which continually interpreted any anti-COVID action as an affront to the presidential ego https://t.co/LYKjSZVzu2 pic.twitter.com/s7OvQmLfx4

apologies; In The Guardian: https://t.co/p2Hckf5An3

Fox News guest Dave Ramsey: "I don't believe in a stimulus check because if $600 or $1400 changes your life you were pretty much screwed already. You got other issues going on." pic.twitter.com/6r1kTCxt8E

Sen. Lindsey Graham made the essential case for impeaching Donald Trump — back in 1999 pic.twitter.com/0AjrKl9h0f

This is quite the lede: "Controversial conspiracy congresswoman Marjorie Taylor Greene cheated on her husband with a polyamorous tantric sex guru." https://t.co/KHHWY7NR3j