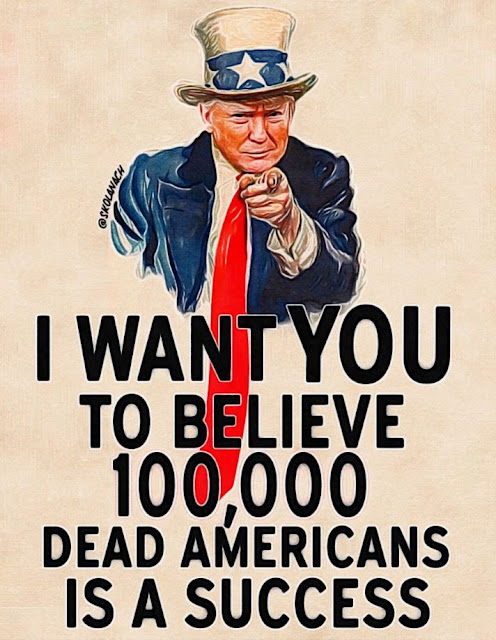 In the same 2016 speech, Trump spoke out against "taxpayer money [being used] to facilitate our slide to a culture of death". ... And here we are.

New: President Trump has complained to advisers about the way coronavirus deaths are being calculated, suggesting the real numbers are actually lower — and a number of his senior aides share this view, according to sources w direct knowledge. w @sam_baker https://t.co/n9Fs6J8oSi
— Jonathan Swan (@jonathanvswan) May 6, 2020


Right out of the gate, we're into "just make up numbers"!


This is called seeding. Trump will now be asked about this as if he didn't bring it up, and he'll say many people are saying the death toll isn't actually as high as reported. Eventually he'll make the death toll a Democratic hoax to bring him down.
— Paul 👻 (@pablo_honey1) May 6, 2020

I asked ⁦@realDonaldTrump⁩ why he didn’t wear a mask at the Honeywell plant yesterday. He said he had worn one. I said we did not see him wearing one. He said he wore one backstage and the Honeywell chief said it was not necessary to wear in the plant. pic.twitter.com/4KYvq3J6yE
— Jeff Mason (@jeffmason1) May 6, 2020

"I was backstage, totally wearing a mask, when Chief Honeywell came up to me and said, 'Sir, Sir, you don't need a mask, you're the healthiest President in history! My 401K is also up 800,000% because of you!' Mr. Honeywell then started crying."
— Trumpy Trumpy (parody) (@outofcontroljb) May 6, 2020

JOHN ROBERTS: Will the nation just have to accept the idea that by reopening there will be more death?

TRUMP: "We have to be warriors. We can't keep our country closed down for years ... hopefully that won't be the case, John, but it could very well be the case." pic.twitter.com/GgJRW3FX9b
— Aaron Rupar (@atrupar) May 6, 2020

1. The war metaphor was always a double edged sword. It evokes the idea of a common and shared purpose sacrifice but also, as with Trump telling Americans they are "warriors" an implicit defense of sending people to their deaths. https://t.co/wfz2Qh5wK6
— Jeet Heer (@HeerJeet) May 6, 2020

The "war" metaphor represents the people sacrificing themselves for the sake of the state. It fails to capture a crisis where the people must make sacrifices for each other, and the state must work on behalf of the most vulnerable.
— David (@Kaiten1978) May 6, 2020

It’s only a “War” if every mission is a suicide mission We’re not warriors so much as kamikazes that did not volunteer. He’s brazen in his choice of metaphor Wonder who in that hellish WH picked this terminology Sounds like Pompeo, it’s that ridiculous. He & his are AWOL as usual
— (((socially distant))) (@macushla7) May 6, 2020

Exposing yourself and others to the Coronavirus is not an act of heroism or warriorism. It's a reckless disregard for human life.
— John Nada (@No_Signal00) May 6, 2020

Politico has seen White House docs estimating that 150k to 200k deaths will be "saleable" and increase Trump's chance of electoral victory
— Darryl Bubner (@darrylbubner) May 6, 2020

"This virus is going to disappear," says Trump, who adds that "this is worst attack we've ever had. This is worse than Pearl Harbor ... and it should've never happened." pic.twitter.com/JqJKeEEXEC
— Aaron Rupar (@atrupar) May 6, 2020

REPORTER: What kind of message does it send if you're surrounded by nurses who are not social distancing and not wearing masks?

"We've done substantially more testing than the entire world together." -- this claim has quickly become one of Trump's standard lies. It is not even close to true. I don't think any reporter has challenged him on it even though he's said it many, many times. pic.twitter.com/jbmiSrhn6j
— Aaron Rupar (@atrupar) May 6, 2020

Trump rebukes a nurse who says "PPE has been sporadic, but it's been manageable."

"Sporadic for you, but not sporadic for a lot of other people," Trump replies. "That was fine, but I have heard we have a tremendous supply to almost all places." pic.twitter.com/zOf2rWxvHx
— Aaron Rupar (@atrupar) May 6, 2020

"There are a lot of people that don't believe in such big testing," Trump says, making stuff up (nobody believes lots of testing isn't necessary for businesses to safely reopen) pic.twitter.com/H0s20r2NH6
— Aaron Rupar (@atrupar) May 6, 2020


"What we are doing is we wanna terminate health care, for ... under Obamacare, because it's bad." -- Trump's latest word salad about health care featured some unfortunately phrasing pic.twitter.com/5Stf99SbMG
— Aaron Rupar (@atrupar) May 6, 2020

"This is a mobilization against a war" -- Trump pic.twitter.com/wdXeFGbLqD
— Aaron Rupar (@atrupar) May 6, 2020


Kayleigh McEnany Has Done The Impossible. She Has Made Trump Seem Fairly Coherent
(Presumably, Trump Possessed Some Intelligence At One Point; A Little Must Still Remain)

McEnany: "There were supposed to be 2.2 million deaths & we're at a point where we are far lower than that, and it's thanks to the great work of the Task Force & the leadership of President Trump." (She's comparing what's happening to a scenario where the govt did nothing at all) pic.twitter.com/KHw6UKDYH2
— Aaron Rupar (@atrupar) May 6, 2020


"The notion that everyone needs to be tested is simply nonsensical" -- Kayleigh McEnany pic.twitter.com/3KXs1S6d6d
— Aaron Rupar (@atrupar) May 6, 2020

Then why is everyone tested before they come in contact with Trump & Pence? 🤔
— Midwin Charles (@MidwinCharles) May 6, 2020

McEnany explains that by using the term "warriors," Trump isn't suggesting people put themselves at risk by going to work, but instead is merely commending them for staying home & social distancing (even while the number of new cases in the country is rising). Totally incoherent. pic.twitter.com/RbZog59Vqh
— Aaron Rupar (@atrupar) May 6, 2020

.@jeffmason1: Before you joined the WH, you went on Fox & proclaimed the coronavirus would not come to the US. Do you regret that?

McENANY: "I would turn the question back on the media, and ask similar questions."

Uncut deflection & whataboutism. She then ends the briefing. pic.twitter.com/DlJb206qOZ
— Aaron Rupar (@atrupar) May 6, 2020

Her words mean nothing.

This has less-than-zero news value. It is the opposite of news.

There's not even the figleaf of knowledgeable medical experts in the wings.

This should not be broadcast live anywhere but C-SPAN. https://t.co/FhIVx3hyW5
— Dan Froomkin/PressWatchers.org (@froomkin) May 6, 2020


you know you’re in for something good when the post starts with “you can call me a grandma killer”
— Gideon Resnick (@GideonResnick) May 6, 2020

This is the same lady who freaks out that trans people exist because she thinks we pose a threat in bathrooms or whatever... but she’ll be damned if you ask her to not spread a pandemic by telling her that she can’t go to Buffalo Wild Wings for a month. pic.twitter.com/AjWoS7UvFB
— Parker Molloy (@ParkerMolloy) May 6, 2020

Note how it goes from killing Grandma to "make other people comfortable" in one sentence. If you can't even sustain your Modest Proposal argument for the span of a single tweet without slipping into euphemisms, maybe examine the reasons you're uncomfortable making it. pic.twitter.com/uR7VTTbDgu
— James Poniewozik (@poniewozik) May 6, 2020

people say moby dick has one of the best opening lines of all time, but was before someone wrote "call me grandma killer"
— Emma Berquist (@eeberquist) May 6, 2020

Call me Grandma Killer. Some years ago—never mind how long precisely—having little or no money in my purse, and nothing particular to interest me on shore, I thought I would sail about a little and see the watery part of the world. It is a way I have of driving off the spleen and
— Nick Douglas (@toomuchnick) May 6, 2020

How the fuck are your kids losing their teachers when you homeschool?

Jesus Christ they never realize we can see their profiles pic.twitter.com/mjQXJIbCtF
— Nash Across the 8th Dimension (@Nash076) May 6, 2020

I see that Grandma Killer is also a hypocrite... pic.twitter.com/m4puvjmJTe
— Jeff Mayers (@TimeLordJeff) May 6, 2020