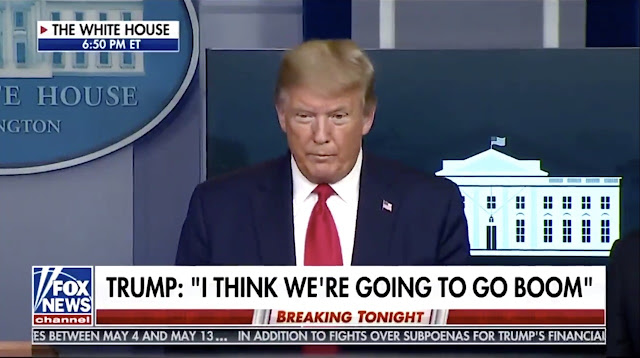 The "Very Complicit Is A Thing Called The Media" Edition


Trump's bone spurs must've flared up when he said this pic.twitter.com/C5KRW7oNwc
— Aaron Rupar (@atrupar) May 7, 2020

Since Trump thinks he’s a “warrior “ and won’t wear a mask, and thinks we should open, why are we wasting daily tests on him? Send him to a meat packing plant or 3 without a mask. Warrior my ass!#TrumpValet @realDonaldTrump @CNN @ABC @CBSNews @NBCNews
— iup404 (@iup404) May 7, 2020

"What they did, what the Obama administration did, is unprecedented ... and I hope a lot of people will pay a big price because they are dishonest, crooked people. They are scum." -- Trump is now coming perilously close to calling Obama "scum" and calling for his prosecution pic.twitter.com/tAE889kimp
— Aaron Rupar (@atrupar) May 7, 2020

Trump: "Very complicit is a thing called the media. The media is totally guilty. And all of those writers and so-called journalists -- they're not journalists, they're thieves -- all of those journalists that received a Pulitzer Prize should be forced to give them back." pic.twitter.com/HqHFNabb5A
— Aaron Rupar (@atrupar) May 7, 2020

Definitely the face of a "very happy" guy pic.twitter.com/u1oLFQsNcN
— Aaron Rupar (@atrupar) May 7, 2020

"It was a congratulatory call" -- Trump says Putin called to congratulate him on the 75th anniversary of [checks notes] Russia's victory over Nazi Germany pic.twitter.com/JOlL0qCqky
— Aaron Rupar (@atrupar) May 7, 2020

Trump and @GregAbbott_TX have some laughs after Trump claims he took Syria's oil, which would violate international law pic.twitter.com/NtJa5n4H4K
— Aaron Rupar (@atrupar) May 7, 2020


After learning one of his valets was infected, Trump became "lava level mad" at his staff and said he doesn't feel they're doing all they can to protect him.

The unknowingly infected valet was close to Trump throughout the day on a consistent basis. https://t.co/BgASWrpk1G
— Kyle Griffin (@kylegriffin1) May 7, 2020

If #valet showed first symptoms yesterday
he was infected 5-14 days ago
If trump is infected
it could have happened as recently as two days ago
or yesterday
because...
body takes 5-10 days after infection to develop antibodies
So..
he will not have a positive test result
YET
(4)
— Neva Lucas (@NevaLucas) May 7, 2020


NEW: We reviewed footage of Kayleigh McEnany from CNN in summer 2015.

She called comments from Trump "racist," and "hateful" and "not the American way." Calling him a "showman" and "not a serious candidate." Adding, "I don't want to claim this guy."https://t.co/HstjxsDZAw
— andrew kaczynski🤔 (@KFILE) May 7, 2020


And Just Like Everyone Predicted A Couple Of Weeks Ago . . .


South Dakota Refused To Shut Down, Now Faces One Of The Largest Coronavirus Outbreaks In The Country - ⁦@realDonaldTrump⁩ should go check it out and show his support for the governor. #TrumpValet https://t.co/0plWsgCPat
— Adrian - #ClimateCrisis (@eversollae) May 7, 2020