Trump Refuses An Essential Nationwide Testing Program Solely Because "All This Testing" Will Make Him "Look Bad". His Criminal Negligence Is Causing American Deaths Right Now.

A massive nationwide testing program is something all independent public health experts agree is absolutely vital to understanding the coronavirus and then taking steps to stop its spread. President Donald Trump refuses to approve that measure because "all this testing [will] make ourselves look bad".


Trump was acknowledging that he sees testing as a matter of his own political health rather than the public's.

The context of his comment was also revealing, because he was speaking entirely about the public perception of the problem rather than the problem itself — and started off by ascribing ill intent to the media for accurately reporting its extent. ...

To Trump, knowing you have a case – which, of course, allows people to get proper treatment, and to isolate themselves so they don't infect others – has no positive value. It's just bad optics. ...

Trump also repeated one his favourite and most egregious lies, claiming the US has "done more testing than every other country combined". He has made that false claim at nearly every press meeting for the last two weeks.

As Froomkin notes: "It's pure lunacy." The US has done less than 20% of the total tests worldwide, not the 51+% Trump pretends has taken place. Russia, Germany and Italy combined have done more testing than the US. (Ranking by tests per million people places the US about 45th in the world.)

The US has administered 8.6 million tests, a fraction of what is needed. In late April, the US was conducting an average of about 250,000 tests per day. Harvard's Global Health Institute stated that the US should be doing four times that amount every day. 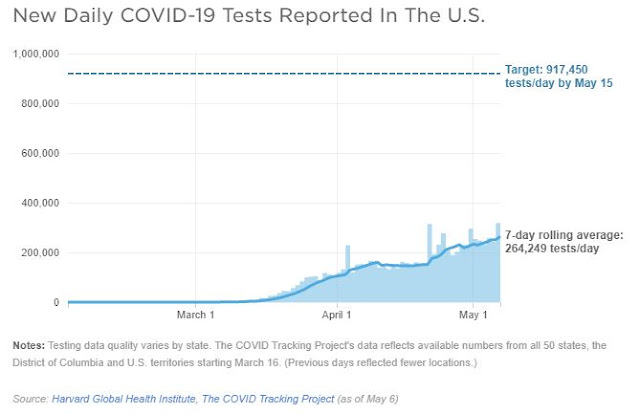 More than two-thirds of Americans surveyed by Monmouth University in a recent poll were more concerned about lifting restrictions too quickly rather than too slowly. Many states have begun re-opening without meeting even the minimal restrictions suggested by the Trump administration. Relaxing the distancing guidelines before a proper level of testing has been done will be a death sentence for thousands of Americans.

Andy Slavitt, the acting administrator of the Centers for Medicare and Medicaid Services under President Barack Obama and now a senior adviser at the Bipartisan Policy Center in Washington:


I think he has given up on the hard stuff and as a consequence is writing off people's lives. Not, unfortunately, in exchange for a better economic outcome. The economy — hiring, consumer spending, buying cars, getting on airplanes, signing leases — isn't going to happen. It's not going to happen until we have demonstrated we can navigate this global health crisis.

Jacob S. Hacker, the director of the Institution for Social and Policy Studies at Yale University:


Doing so will result in many, many more deaths, with those deaths, of course, concentrated among less affluent Americans. And not just more deaths, but also a rationale for denying additional unemployment benefits and other vital assistance to those on the lower rungs of the economic ladder.

New York State Governor Andrew M. Cuomo: "The fundamental question which we're not articulating is how much is a human life worth?"

Trump is consigning thousands of Americans to the grave right now because he refuses to increase testing solely because he knows the results will make him look bad. This really should be a much bigger story.

Philip Bump of the Washington Post wrote wrote that Trump's comment offered "insight" into "why he is reticent to embrace widespread testing". He added that Trump's statement was

Bump reminded his readers that back in early March, Trump said he didn't want to transfer potentially infected passengers off a cruise ship for treatment because he worried it would spike the number of recorded cases in the United States."

Another Post reporter, Greg Sargent wrote: "President Trump is prioritizing his efforts to create the illusion that the country is returning to normalcy over taking concrete steps that might make that actually happen safely."


Trump resists making testing even more prevalent, and he gave a clue about the reason in remarks on Wednesday: He seems worried about how the numbers look and how they might reflect on him….

The purpose of testing, of course, is not just to confirm the illness in people showing symptoms but to prevent those who are feeling fine — yet carrying coronavirus — from spreading it to others who could get sicker or die.

We should clarify: That's testing for you, he's talking about. The White House tests its officials and visitors regularly.