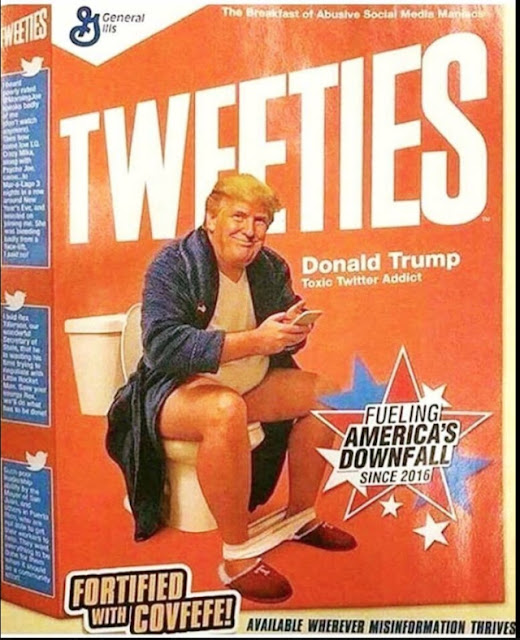 Trump is now up to 103 tweets or retweets today, including numerous retweets of QAnon accounts and at least one of a Twitter egg
— Aaron Rupar (@atrupar) May 10, 2020

Trump has retweeted, quote-tweeted and tweeted himself 52 messages in around an hour’s time this Mother’s Day morning. A sampling: pic.twitter.com/xDvU87NZoA
— Manu Raju (@mkraju) May 10, 2020

(Note: Twitter considers this type of rapid-fire retweeting to be a form of spamming. It's a violation of its policies and should result in an account suspension.)

In any previous era the president using his platform to promote a business he still owns and profits from would be a huge scandal https://t.co/mB1IlCdvSr
— Aaron Rupar (@atrupar) May 10, 2020

When are the Fake Journalists, who received unwarranted Pulitzer Prizes for Russia, Russia, Russia, and the Impeachment Scam, going to turn in their tarnished awards so they can be given to the real journalists who got it right. I’ll give you the names, there are plenty of them!
— Donald J. Trump (@realDonaldTrump) May 10, 2020

It isn't even remarkable that Trump is still obsessing about the Russia investigation even during a global pandemic in which the US leads the world in cases and death.
— digby (@digby56) May 10, 2020

Trump is so dense he retweeted a reply he misread that (accurately!) describes Bill Barr’s DOJ as “corrupt.”

Unbelievable, and the account he retweeted is baffled by it. pic.twitter.com/i6e0pyIfbf
— Aaron Rupar (@atrupar) May 10, 2020

Why is it that all of the political pundits & consultants that I beat so easily & badly, people that charged their clients far more than their services were worth, have become so totally “unhinged” when it come to your favorite President, me. These people are stone cold crazy!
— Donald J. Trump (@realDonaldTrump) May 9, 2020

The OAN segment concludes, "There is concern that the deep-state Democratic cabal and the Big Pharma are working to derail President Trump's reelection, and force the American people into total submission and control."

"@OANN is Great News, not Fake News. Everybody should be carrying them!" -- President Donald Trump pic.twitter.com/dkfSAayyw7
— Matthew Gertz (@MattGertz) May 9, 2020

So America is not great again? It's taking too long . . .

It’s just a fact that pretty much every single person who argues that Trump has done fine with the virus and we need a widespread reopening of the country would’ve also said you were an insane fear monger for predicting 80k dead 6 weeks ago.
— Tim Miller (@Timodc) May 9, 2020

The President and his senior staff understand that you could use widespread surveillance testing to make a return to normal work patterns safe, they just won’t do it for anyone but themselves. https://t.co/uHStXisktF
— Matthew Yglesias (@mattyglesias) May 10, 2020

Why do political reporters say Trump is “struggling” to do something when he’s actually not even trying? They do it all the time. See, I.e.: “The administration is struggling to expand the scale of testing to what experts say is necessary to reopen businesses safely...” https://t.co/QC4JQ9ZvnA
— Dan Froomkin/PressWatchers.org (@froomkin) May 9, 2020