Don't be fooled by Trump's "Returning to Work" event tonight on Fox News: US coronavirus cases are on the rise https://t.co/oAeGQo9Ick
— Aaron Rupar (@atrupar) May 3, 2020

Marc Short, chief of staff to Pence, repeatedly questioned the data being shared with Trump and said he did not believe the death toll would ever get to 60,000 and that the admin was overreacting. Day after day, Short pressed to reopen the entire country. https://t.co/LYbCK3o1M4
— Kyle Griffin (@kylegriffin1) May 3, 2020

CNN has reported that Trump's January 3rd daily intel briefing included intelligence about coronavirus & its potential to spread. And the Washington Post reported that US intel warned about coronavirus in more than a dozen briefings for the President in Jan & Feb. pic.twitter.com/jzah7fgOVt
— Jeremy Diamond (@JDiamond1) May 3, 2020

Reminder: New coronavirus cases in the country continue to go up, and deaths have plateaued. We're not even over the hump yet and the president is tweeting out feel-good historical fiction. https://t.co/xvkBDPJqE9
— Aaron Rupar (@atrupar) May 3, 2020

Trump retweeted this poll on April 30, un-retweeted it and then retweeted it again on May 1, and now retweeted it for a third time https://t.co/X5KJACstsF
— Aaron Rupar (@atrupar) May 3, 2020

2,000 Americans a day are dying from the coronavirus and Trump has posted multiple tweets this weekend lauding boaters for slapping his name and merch on their boats https://t.co/KWoWZ6Rbqy
— Aaron Rupar (@atrupar) May 3, 2020

He says as the virus "spread exponentially in a way that no one could have predicted." Hmm, that's a funny way of saying every single scientist and doctor predicted that it would spread that way. Lethal incompetence. https://t.co/8iEaqiJjfO
— Richard Stengel (@stengel) May 3, 2020

65,000 Americans dead and counting, unemployment on the way to 20 percent or higher, our alliances in tatters, and Don Jr thinks his dad will end up on Mount Rushmore. Delusional. pic.twitter.com/4P2O32Tb8g
— Aaron Rupar (@atrupar) May 2, 2020

Of course, it's utterly delusional. But even from a practical standpoint, recreating that silly, fake image in real life would involve securing hundreds of thousands of tons of rock to the front of Mount Rushmore since there is no rock outcropping in that spot, waiting to be blasted and carved. (During the actual work, about 450,000 tons of rock were blasted away.)

I have not seen Mount Rushmore in person, but it looks pretty cool from this angle: 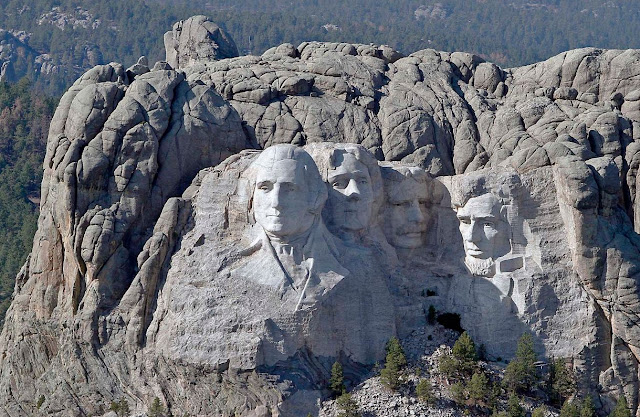