Trump's Grand Promise: "His Own Media Platform" Will Be "A Beacon Of Freedom" And "The Hottest Ticket In Social Media". "In A Time of Silence And Lies", It Will "Completely Redefine The Game" . . . Finally, It's Here! . . .
It's A WordPress Blog That Does Not Allow Comments. NY Mag Calls It "Sad Twitter".

In January 2021, Donald Trump promised to build his own social media platform.

Hours after Twitter permanently banned him on January 8, a desperate Trump used the official White House account, @POTUS, a few hours after his ban (that account, too, was banned until Trump was out of office):

I predicted this would happen. We have been negotiating with various other sites, and will have a big announcement soon, while we also look at the possibilities of building out our own platform in the near future. We will not be SILENCED! . . . STAY TUNED! 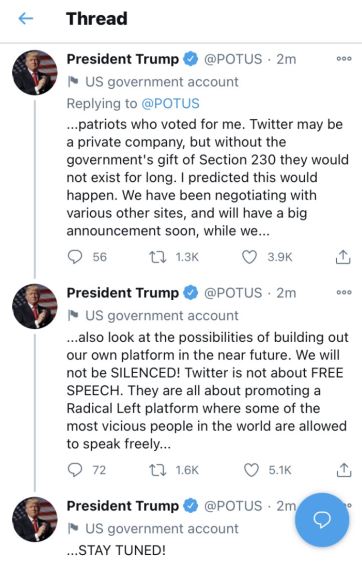 On March 21, 2021, Fox reported that Trump would be returning to social media in the near future "with his own service", according to senior adviser Jason Miller.

MyPillow CEO Mike Lindell actually started a social media site ("Frank") before Trump did, though it has been an utter shitshow of a disaster of a laughingstock.

Now Trump has finally come through. His big media empire has arrived. Trump calls it "a beacon of freedom" in "a time of silence and lies".
. . .
. . .
It's a blog . . . that does not allow comments.
One report from late Tuesday night: "The like option, however, does not work as of now, and neither does the Twitter share option."
Needless to say, the game has not been changed.
Posted by allan at 11:19 PM