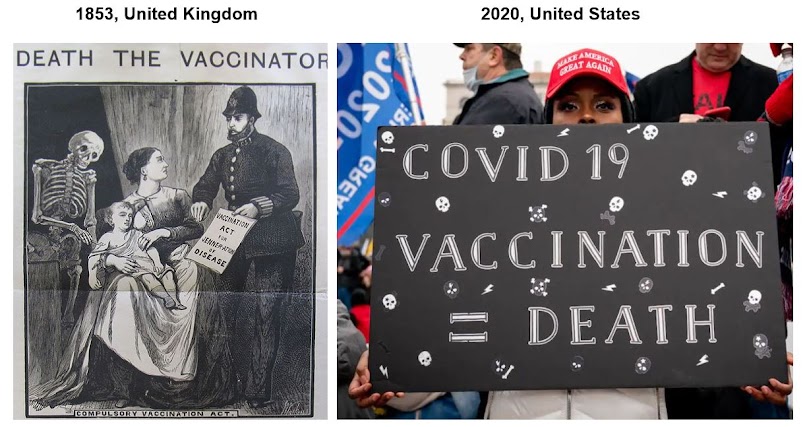 Paula Larsson (Doctoral Student, Centre for the History of Science, Medicine, and Technology, University of Oxford)
The Conversation, October 4, 2020

As we get closer to an effective vaccine for COVID-19, we should expect to see a renewed push of disinformation and vocal resistance from the anti-vaccination movement. Over the past year, seemingly endless conspiracy theories and misinformation campaigns have gained traction online amidst rising COVID-19 infection rates worldwide. Looking at the history of these movements can help us understand why they can be so effective at capturing a popular following.

As a historian of medicine, it's become clear from researching the history of vaccines that those who promote anti-vaccination consistently use a standard set of strategies. Although it can be hard to see patterns of argument in the modern context, looking back at a historical instance of epidemic and misinformation provides a useful case study for revealing today's recurring anti-vaccination strategies.

One popular pamphlet published in 1885 during the smallpox epidemic in Montréal is a great example. Over a century later, we have the benefit of living in a world that has eradicated smallpox using a vaccine. Yet in the past, smallpox vaccination was hotly contested, despite the evidence in favour of its effectiveness.

Published by a leading anti-vaccinationist, Dr. Alexander M. Ross, this pamphlet was widely circulated during the smallpox epidemic of 1885 in Montréal, as public health officials were seeking to increase vaccination coverage.

Ross seized on the opportunity of increased health measures to gain authority, notoriety and personal fame. He painted himself the hero of his own story, the "only doctor; who had dared to doubt the fetish" of vaccination. Despite this, it was discovered that he had been recently vaccinated during the epidemic, a fact that was gleefully reported by the major newspapers at the time.

His pamphlet serves as a prime illustration of the strategies used by anti-vaccinationists — both then and now. These arguments are not new and have changed little over time. Learning to recognize their repackaging in modern form can help with effectively combating their power.

Minimize the threat of a disease

The headline of a section of Ross's pamphlet.

Ross and his anti-vaccination associates were quick to dismiss the threat of smallpox. Despite mortality rates between 30 and 40 per cent, and the extreme contagiousness of the disease, it was common for anti-vaccinationists to claim that smallpox was only a minor threat to a population.

Ross decried the "senseless panic" caused by health officials and physicians over the epidemic, claiming that smallpox was not, in fact, epidemic, and that the city had "very few cases." Official numbers for the epidemic would eventually rise to 9,600 reported cases with 3,234 deaths — nearly two per cent of Montréal's population at the time. An additional 10,000 cases were recorded in the province of Québec, but historians believe the actual numbers were likely much higher. These numbers and the story of this epidemic have been narrated by historian Michael Bliss in his non-fiction account, Plague: A Story of Smallpox in Montreal.

The minimization of threat is a common tactic in contemporary debates as well. Many who promote the anti-vaccination agenda claim vaccines to be more dangerous than the disease.

Claim vaccine causes illness, is ineffective or both

One section outlines a whole host of supposed effects from smallpox vaccination.

Although modern arguments have focused on the false claim that vaccines cause autism, historic arguments were much more varied in their allegations of infections from the smallpox vaccine. The anti-vaccinationists of the past claimed that vaccination caused a full spectrum of diseases, from smallpox itself to syphilis, typhoid, tuberculosis, cholera and "blood-poisoning."

These claims were not always groundless, but their risks were consistently exaggerated. Cases had been known to occur of secondary disease transmission due to poor practice. Some physicians used arm-to-arm vaccination — meaning they would use the same instrument to vaccinate a whole line of people — or used vaccine prepared from a human source rather than a bovine source. The lack of sterile cleaning between operations or the use of vaccine prepared from an infected person could lead to rare cases of secondary disease transmissions.

The discovery of such transmissions (years earlier) sparked some of the first regulations around vaccine preparation and administration, and generated a keen concern within the medical community about vaccine safety — a concern which has continued to be a mainstay of vaccine production to this day.

Declare vaccination is part of a larger conspiracy 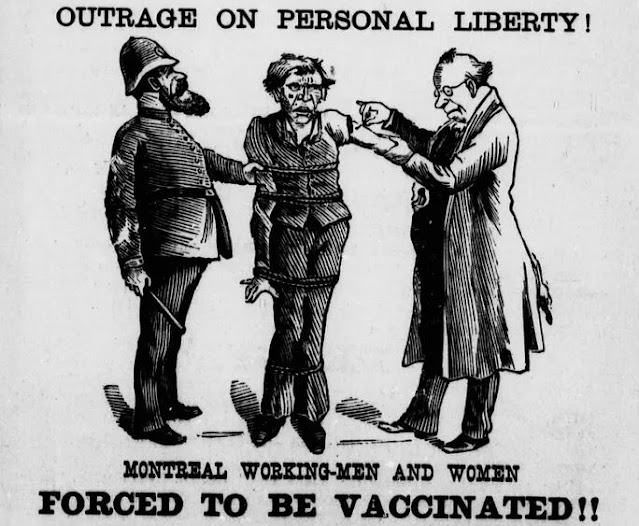 Cartoon depicting a working-class man being forcibly vaccinated by a health official, while held by a policeman. [Smallpox outbreak, Montréal, 1885]

Ross's pamphlet was adamant about the role of both the press and the medical profession in stoking fears over infection as part of a "mad" campaign for gaining money. Much like today, epidemics created opportunities for both employment and research in the medical field. Yet this employment was painted as an unethical exploitation of the poor, worth "one million pounds sterling" to the profession, rather than an effort in combating the suffering and death of thousands.

Additionally, public health measures were depicted as an assault on personal rights and an overreach of government power. "Talk no longer of Russian Tyranny," Ross declared, for there was "none so formidable" as the city health officials. His arguments are still echoed over a century later in the current pandemic, as we see continued support behind the belief in a conspiracy to limit freedoms (among other, more extreme, conspiracy theories).

Use alternative authorities that legitimize your argument

The final section of Ross' Pamphlet includes a long list of testimonials against vaccination from 'the most eminent physicians in Europe.'

Last but not least is an appeal to authorities that help legitimize the anti-vaccination argument. The modern anti-vaxxer movement has an abundance of these, led by Andrew Wakefield, the now discredited former physician who originally published the fraudulent study linking the MMR (measles, mumps, rubella) vaccine to autism.

But the anti-vaccination movement has had a long tradition of promoting the words of "experts" who support their narrative. In the 19th century, vaccination debates often brought in a similar small circle of medical men who spoke against vaccination, calling it a "filthy" and "evil" practice. Although their arguments were refuted by many in the medical community, they gained a lasting mantle of prestige amongst anti-vaccinationists as the authoritative voices that offered the "proof" that was needed.

This is not an exhaustive list of anti-vaccination strategies — either historical or contemporary. There have always been individuals who capitalize on medical crises to push their own agenda, and in the modern age of digital media, strategies of misinformation have evolved and expanded. Much like Ross, the leaders of these movements gain social power by painting themselves as lone crusaders.

As we get closer to a worldwide distribution of COVID-19 vaccine, we can expect to see more and more such crusaders publishing arguments against vaccination. Breaking down patterns of arguments seen repeatedly in the past can provide a useful lesson for combating them in the future.

1802: James Gillray satirized British citizens who were worried that receiving a cowpox inoculation would cause them to develop bovine features. 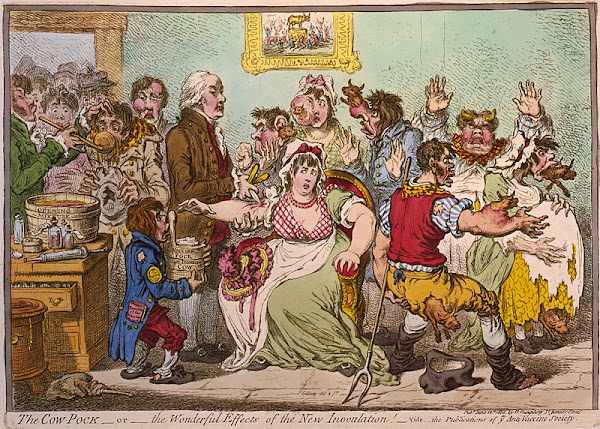 1890s: British handbill, pledge for candidates for boards of guardians and district councils to vote against compulsory vaccination measures. 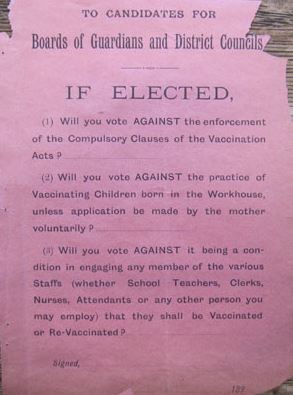 Circa 1900: "Vaccination A Curse And A Menace To Personal Liberty". Handbill advertising a book by J.M. Peebles, entitled "Eczema from Vaccination. An Innocent Victim of the Vaccinator's Lance. Compulsory Vaccination and the Result", one of several similarly-titled books he published. 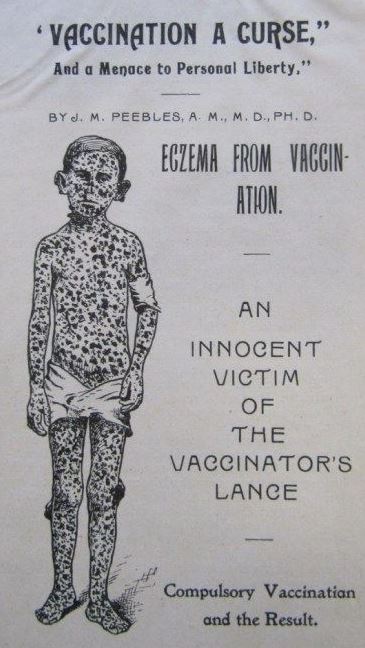 1930: From a US booklet entitled "Health in Pictures". 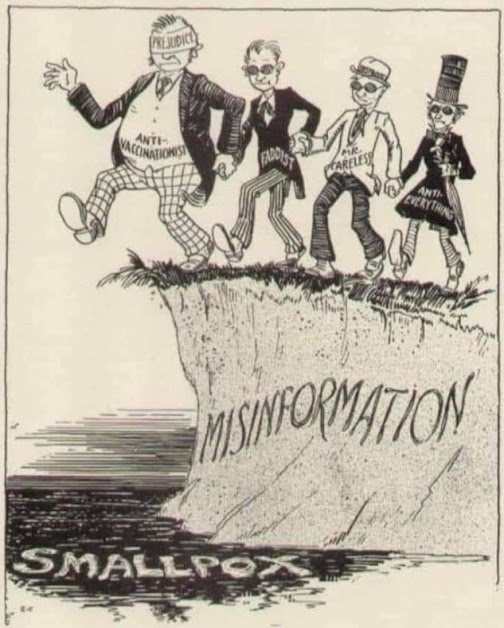 1950s: One of many mailings circulated in the United States against the polio vaccine. 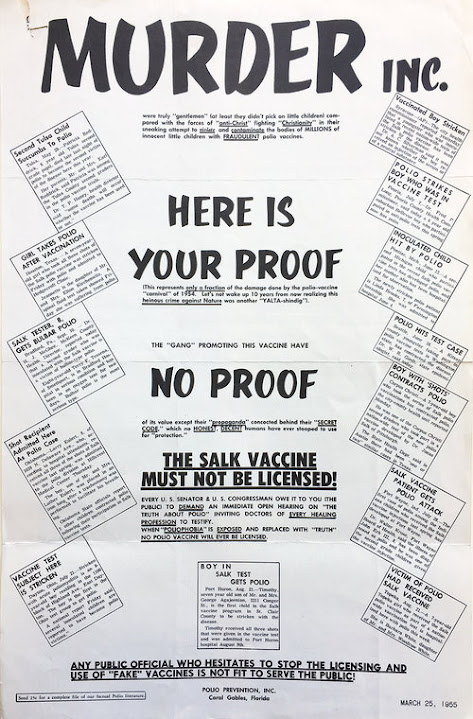 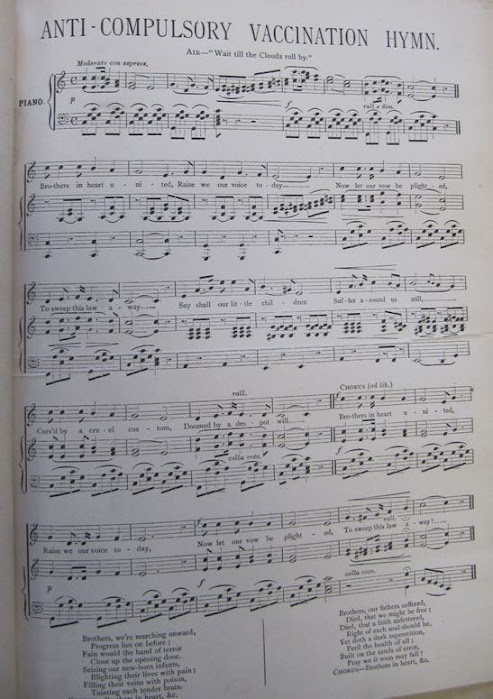 Brothers in heart united,
Raise we our voice today
Now let our vow be plighted,
To sweep this law away.
Say shall our little children
Suffer around us still,
Curs'd by a cruel custom,
Doomed by a despot will.

Brothers, we're marching onward
Progress lies on before;
Fain would the hand of terror
Close up the burning door.
Seizing our new-born infants,
Blighting their lives with pain;
Filling their veins with poison,
Tainting each tender brain

Brothers, our fathers suffered,
Died that we might be free;
Died that a faith unfettered,
Right of each soul should be,
Yet doth a dark superstition
Peril the health of all;
Built on the sands of error,
Pray we it soon may fall! 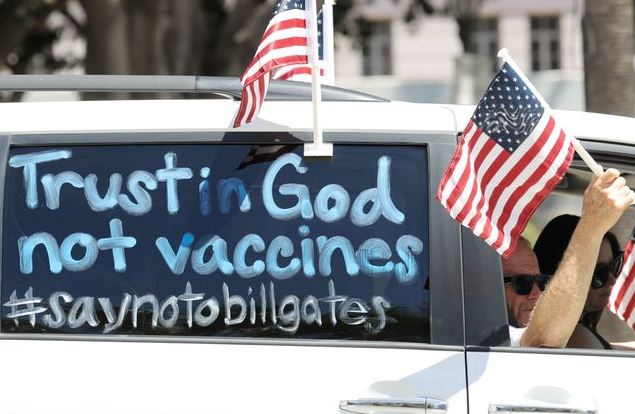