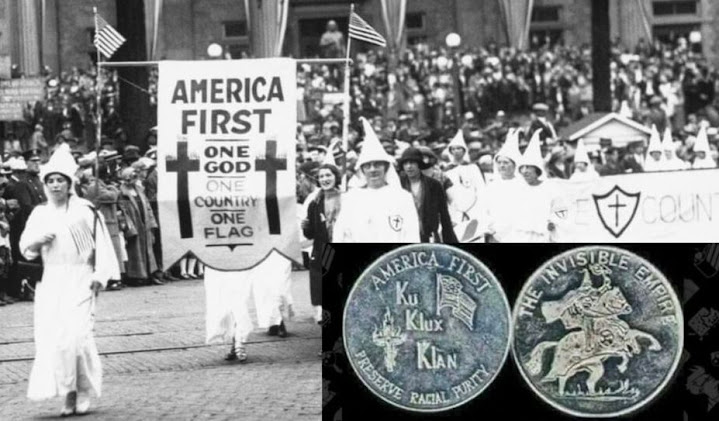 Some of the most nativist stuff we’ve seen pic.twitter.com/diPDItUt2V

Take a look at how they describe their immigration and infrastructure policy. pic.twitter.com/6jwkhyAKvl

They say the group is trying to follow in Trump's “footsteps" pic.twitter.com/LAxstyEOc3

The new "America First Caucus" being formed by white supremacists Marjorie Taylor Greene, Paul Gosar, Louie Gohmert & others that calls for “respect for uniquely Anglo-Saxon political traditions” is nothing more than a Ku Klux Klan chapter in Congress.

Matt Gaetz wants to join. Is sex trafficking an Anglo Saxon concept? Asking for a friend

If it’s all the same to you, we’ll just call them Nazis.

I don't want to alarm anyone unnecessarily but several members of Congress are completely nuts.

Dear @mtgreenee & @RepGosar: I have some questions about your Anglo-Saxon caucus:

Will non Aryans be allowed to join?

If so, do we have to sit in the back of the room because we’re not white?

Can we have fried rice and nachos during the meetings?

Asking for a friend. https://t.co/WkD0ZIRCxr

I think we should stop immigration from Anglo Saxon countries until we figure out what the hell is going on.

Sarah Churchwell, a professor of American literature and humanities at the University of London, is the author of Behold, America: The Entangled History of "America First" and "the American Dream" (2018). From an interview she did with Vox (here):

It was a Republican campaign slogan in the 1880s, which means it appeared much earlier than most people think. But it didn't become a national catchphrase until President Woodrow Wilson used it in 1915. He was using it to try to keep America out of the first World War. But he was kind of doing a tap dance, because he wanted to placate the isolationists, although he was himself an internationalist. . . . It was ostensibly about maintaining neutrality in the name of leadership.
But then the phrase gets taken up in the name of isolationism almost instantly, and it is quickly connected with other ideas that were also on the rise at the time, especially the rise of the Ku Klux Klan. It became linked to anti-immigration movements, and sympathizers of fascism, and was popularized by Charles Lindbergh, the famous American pilot who lead the "America First Committee" — a group of some 800,000 Americans who wanted to keep us out of WWII.
[So it began as an antiwar isolationist slogan, and then morphed into an explicitly xenophobic and fascist slogan?]
Yeah, and it happened pretty predictably. . . . Put America first, native-born people first. It connects back to the nativism of the 1840s and 1850s, and it sounds broadly anti-immigrant. In a moment where people were very concerned about waves of immigration, which was a big motivating force for the KKK, it was only natural that America First would become a rallying cry for nativists and racists.
[To be clear, who did the America First-ers want to keep out?]
Anybody who's not white, not Protestant, not what they saw as a native-born American, an old-style American. And that was their notion of what America was supposed to be. So America First did have very strong resonances with ideals like "Make America Great Again," which was a phrase that they nearly echoed as well. The idea then, as now, was that the true version of America is the America that looks like me, the American fantasy I imagine existed before it was diluted with other races and other people. America First spoke directly and powerfully to that segment of white America that felt they were losing their power, their dominance. It was a way of saying me first, only my version of America should be allowed to have any sway here. . . .
[Former Trump advisor Steve Bannon] knows this stuff. Bannon has read history, and he uses phrases like "economic nationalism" which were also associated with America First in the 1920s. It's not a coincidence. They chose the phrase "America First" pretty late in the campaign, and it seem pretty deliberate. Donald Trump didn't stumble on it. 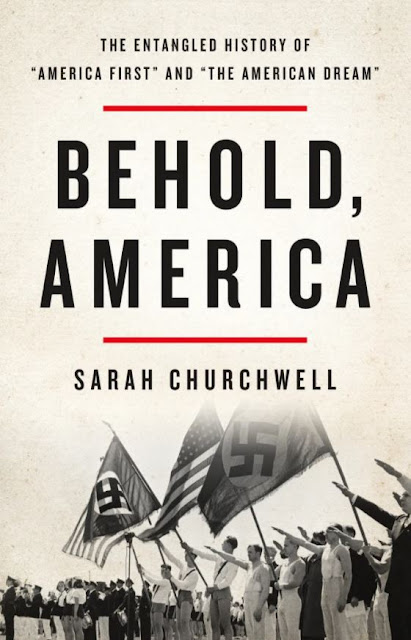 Marjorie Taylor Greene and Lauren Boebert were the lone two members to vote against a bill that would reauthorize the National Marrow Donor Program, which matches bone marrow donors and cord blood units with patients who have leukemia and other diseases

Just 8 House members voted against a bill requiring the FTC to "submit a report to Congress on scams targeting seniors," which passed 413-8:

“I came on your show to talk about the refugee cap, about shots in arms, about kids in schools... I am not wasting one minute of time on Marjorie Taylor Greene” pic.twitter.com/hVeWrJWwIf

After a week of shootings the now bankrupt National Rifle Association is triggered. https://t.co/BNdo0mY7uA

“You should smile more” https://t.co/zo3uLWYtiO

He misses the daily giddiness of that adorable scamp Mike Pence. Oh, the laughs! The laughs!

He should shut the fuck up more.

A paid agent of Russia would not be as despicable, bizarre & anti-American as @TuckerCarlson is here. He finds new ways to be a piece of garbage every single night. Lying to and confusing and manipulating millions of gullible morons endlessly. https://t.co/rIDZOYkI3s

That’s a wrap! Donald Trump sold America out to Russia before he was elected. And once elected, Trump consistently chose Russia’s interests over America’s. https://t.co/GSVWkZ1PqC

OSAMA BIN LOSIN' WEIGHT? Advisers tell us the 9/11 mastermind is ditching fast food and embracing the gray hairs in his iconic beard just months after the attacks that rocked the nation https://t.co/kHYuTU7NoC