Donald Jr. Posts 9 Photos Showing How Great His Father Was As President (But Most Are Idiotic, Unnatural, Unflattering & Were Used As Memes To Ridicule Him) 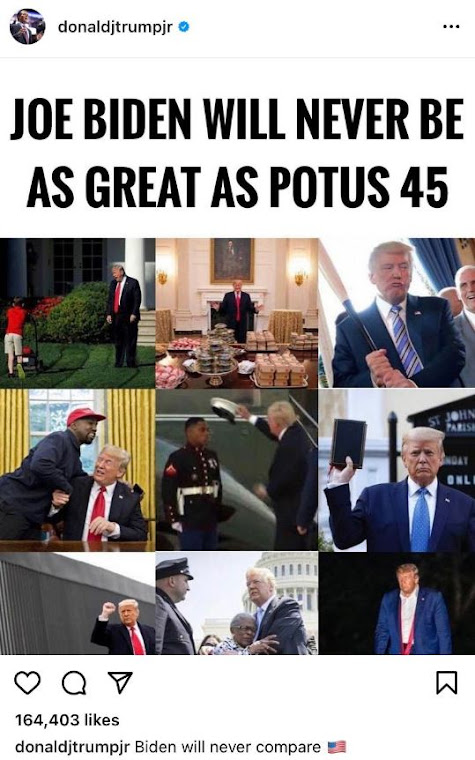 Left to right, top to bottom:

-Disrespectfully removing a soldiers hat (if Obama had done this it would’ve been on Fox 24/7)
-Tear gas photo op holding a bible that he hasn’t read upside down in front of a church he doesn’t attend
-Celebrating his racist monument
-somewhat normal photo? Idk

And finally, a photo of him staining his collar with bronzer looking defeated after an embarrassing rally in Tulsa.

What's hilarious about that is most of the photos he shows are ones that Trump was mocked and ridiculed about .

"HE PUT THE LAWN YELLING PIC IN!!!" pic.twitter.com/GIVqR4DZiw

You should see all of the fawning comments under it.

He included the defunct picture of him after he lost the election!? 🤣🤣🤣

Every time I think Eric's the dumb one, Junior chimes in, and I'm forced to re-calibrate. Then it's vice-versa, and so on, and so forth...

He retweeted a "sarcastic" meme showing a lot of his worst moments. Again showing the incredible stupidity of Jr.🤦‍♂️

Just shows you how out of touch they are with anyone not inside their information bubble. The hamburger one just kills me to this day. About summed up the entire presidency lol.

Nothing says greatness like claiming to be a billionaire and serving cold fast food to national champions. And the cult loved it.

Every embarrassing, pathetic picture of @DonaldJTrumpJr’s daddy possible, and he proudly shows them off. Apparently he craves daddy’s attention and has done WAY too much cocaine.

Just gobsmacked that Jr would use so many of these pics, but MAINLY bottom right, a truly ICONIC milestone of his tired descent into election loss and irrelevance. Unreal. pic.twitter.com/aChOqkw021

Ummmmm, how does he not look at these and realize he played himself with a gallery of some of the most ridiculous photos of his dad.....granted, it's a wide universe from which to choose.

On some level junior hates his father, that’s why he is constantly reminding everyone of just how awful he is. Remember when he posted this? pic.twitter.com/FyREHfup5n

I’m surprised that Don Jr didn’t use this one in his post. pic.twitter.com/PG5qSWPs0X

he forgot to use this picture pic.twitter.com/86R7wTS9l4

Just missing this one pic.twitter.com/3XZGUYQ2i0

All he really wants pic.twitter.com/TpZmMpGyyW

In which Jim Acosta describes the fake award that Rick Scott handed to Trump last weekend at Mar-a-Lago as "a bowl for his tears after the election" pic.twitter.com/eIclHDREjQ