A man who has an immediate opinion on every topic, especially when it involves POC, ... clams up and wants to know all the facts when the perpetrator is white.
— c dot (@c2TheDot) August 29, 2020

Racists, pedophiles, dictators, killers. There’s literally no one that Trump will disavow if he thinks they like him.
— Person Man Woman Camera TV Hogweed (@TheGiantHogweed) August 30, 2020 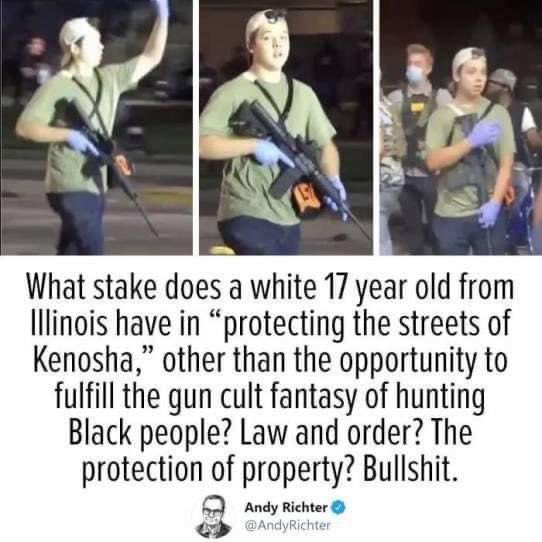 
President Donald Trump has repeatedly distanced himself from acts of violence in communities across America, dismissing critics who point to his rhetoric as a potential source of inspiration or comfort for anyone acting on even long-held beliefs of bigotry and hate.

"I think my rhetoric brings people together," he said last year, four days after a 21-year-old allegedly posted an anti-immigrant screed online and then allegedly opened fire at a Walmart in El Paso, Texas, killing 22 and injuring dozens of others.

But a nationwide review conducted by ABC News has identified at least 54 criminal cases where Trump was invoked in direct connection with violent acts, threats of violence or allegations of assault. ...

Reviewing police reports and court records, ABC News found that in at least 12 cases perpetrators hailed Trump in the midst or immediate aftermath of physically assaulting innocent victims. In another 18 cases, perpetrators cheered or defended Trump while taunting or threatening others. And in another 10 cases, Trump and his rhetoric were cited in court to explain a defendant's violent or threatening behavior. ...

Thirteen cases identified by ABC News involved violent or threatening acts perpetrated in defiance of Trump, with many of them targeting Trump's allies in Congress. But the vast majority of the cases – 41 of the 54 – reflect someone echoing presidential rhetoric, not protesting it.

ABC News could not find a single criminal case filed in federal or state court where an act of violence or threat was made in the name of President Barack Obama or President George W. Bush.

The 54 cases identified by ABC News are remarkable in that a link to the president is captured in court documents and police statements, under the penalty of perjury or contempt. These links are not speculative – they are documented in official records. And in the majority of cases identified by ABC News, it was perpetrators themselves who invoked the president in connection with their case, not anyone else. ...

The perpetrators and suspects identified in the 54 cases are mostly white men – as young as teenagers and as old as 75 – while the victims largely represent an array of minority groups – African-Americans, Latinos, Muslims and gay men. ...

In many cases of assault or threat, charges are never filed, perpetrators are never identified or the incident is never even reported to authorities. And most criminal acts committed by Trump supporters or his detractors have nothing to do with the president. But in 54 cases, court records and police reports indicated some sort of link.

Nevertheless, Trump has said he deserves "no blame" for what he called the "hatred" seemingly coursing through parts of the country. ...

The White House did not respond to a request seeking comment for this report.