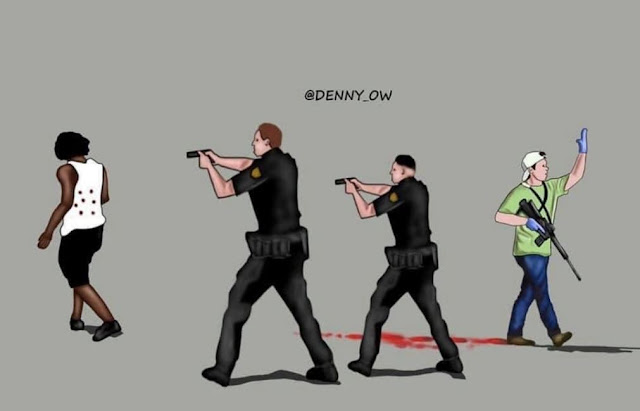 Looking at the Trump Tweet Archive, I counted 18 tweets and 70 retweets between 12:00 am and 2:04 am. 88 tweets in 124 minutes. (The slight difference is because Twitter deleted Trump's retweet of a bullshit QAnon claim that the US has had only 9,000 deaths from COVID-19. This is the deleted tweet, found at FactBase's archive of now-deleted Trump tweets.)

(By the way, this machine-gun retweeting is a clear violation of Twitter's spamming policy. Trump has been guilty of this countless times. A civilian's account would have been banned for this practice many years ago.)
There were 20 retweets from @PollWatch2020 in 18 minutes: 8 between 1:29-1:33 and 12 from 1:41-1:47.


12:00: "The big backlash going on in Portland cannot be unexpected after 95 days of watching and incompetent Mayor admit that he has no idea what he is doing. The people of Portland won't put up with no safety any longer.The Mayor is a FOOL. Bring in the National Guard!"

12:12: "Our great National Guard could solve these problems in less than 1 hour."

12:18: "Wheeler is incompetent, much like Sleepy Joe Biden. This is not what our great Country wants."

12:28: "ANTIFA is a Radical Left group that only wants bad things for our Country."

12:36: "Disgraceful Anarchists. We are watching them closely, but stupidly protected by the Radical Left Dems!"

[This 5-tweet run is a great example of his ping-ponging mind. Then 4 tweets and 14 retweets]

12:59: "The National Guard is Ready, Willing and Able. All the Governor has to do is call!"

[Nothing for eight hours]

10:36 (3 tweets): "Ted Wheeler, the wacky Radical Left Do Nothing Democrat Mayor of Portland, who has watched great death and destruction of his City during his tenure, thinks this lawless situation should go on forever. Wrong! Portland will never recover with a fool for a Mayor....
....He tried mixing with the Agitators and Anarchists and they mocked him. He would like to blame me and the Federal Government for going in, but he hasn't seen anything yet. We have only been there with a small group to defend our U.S. Courthouse, because he couldn't do it....
..The people of Portland, like all other cities & parts of our great Country, want Law & Order. The Radical Left Democrat Mayors, like the dummy running Portland, or the guy right now in his basement unwilling to lead or even speak out against crime, will never be able to do it!"

10:38: "The only way you will stop the violence in the high crime Democrat run cities is through strength!"

Pretty much what any sane and well-balanced individual will get up to in the early AM hours.

This CDC tweet is an example of something that would be front page news in any other presidency.

We have 180k+ dead, the President instead of trying to mitigate it and save lives is trying to sell propaganda that it isn’t true. That is farcical tin pot dictator behavior. https://t.co/0pTtyMZhLt
— Tim Miller (@Timodc) August 30, 2020

Can we pause for a second and talk about his reference to “citizen soldiers.” Don’t tell me he was talking about the Nat’l Guard cause he listed them separately. These militias think THEY are the “citizen soldiers.” He knows that. This is a call to arms.
— Leila Pittaway (@VinoVertias) August 30, 2020

Ron Johnson lies, says "the only Russian disinformation that I'm aware of that has been involved in our politics is first of all in the Steele Dossier and now Democrats."

Why is he on TV talking as though he's Putin's spokesman? pic.twitter.com/gs66vbIkRh
— Aaron Rupar (@atrupar) August 30, 2020

Trump liked a tweet describing Kyle Rittenhouse, a supporter of his who is charged with murdering two protesters in Kenosha, as “a good example of why I decided to vote for Trump” pic.twitter.com/aqIACrwIb8
— Aaron Rupar (@atrupar) August 30, 2020 "Well I think it certainly paints a very clear picture" -- Lara Trump doubles down on Kellyanne Conway's comments about violence in the streets being good politically for Trump pic.twitter.com/COkyJRrtHF
— Aaron Rupar (@atrupar) August 30, 2020

"I think we all have to recognize that people want to get back to normal. And you know what, maybe it's going to a Trump rally that does that" -- Lara Trump dismisses concerns that Trump's campaign speeches could become Covid superspreader events pic.twitter.com/FMfcQy5tus
— Aaron Rupar (@atrupar) August 30, 2020

This is so idiotic. Lara Trump is whining that she didn’t get enough likes on her tweet. https://t.co/MpzyxV5w6r
— Aaron Rupar (@atrupar) August 30, 2020


Here’s a US Senator Ron Johnson suggesting “citizen soldiers” are part of the plan to stop the violence in Portland and Kenosha.

“The Republican party is about to make a massive national hero out of [the Kenosha gunman]. The central element of the Trump Republican party is the right of private deadly force to defend the racial order,” David Frum https://t.co/xo80gIyjMz
— Shannon Watts (@shannonrwatts) August 30, 2020

BREAKING: The mayor of Kenosha, Wisconsin has said that he does not want Trump coming to his town right now.#TrumpRiots #TrumpViolence
— Mrs. Krassenstein (@HKrassenstein) August 30, 2020

Wheeler: Do you seriously wonder Mr. President why this is the first time in decades that Americans have seen this level of violence? It’s you who have created the hate and the division. pic.twitter.com/OgnlQpuZSC
— Acyn Torabi (@Acyn) August 30, 2020

Wheeler: I’m going to do the work I need to do in my local community with my local officials to take accountability for what’s happening on our streets and I’d appreciate that either the President support us or stay the hell out of the way pic.twitter.com/TlAkxsBeqG
— Acyn Torabi (@Acyn) August 30, 2020

It’s almost like Wheeler is pointing out that Trump is rooting for violence to A) distract folks from 183K Americans dead from COVID, and B) frighten and intimidate people from showing up to vote. https://t.co/JfFVYrSxra
— Bryan Harnsberger Psy.D (@PSYCH_HYPE) August 30, 2020

This is insane. The president is threatening to invade a city with federal forces, against the wishes of local officials. https://t.co/Tf6Wy7yW69
— Aaron Rupar (@atrupar) August 30, 2020

Media: And now a panel of three newspaper reporters and a GOP operative will discuss whether Trump’s embrace of chaos is the greatest tactical move since Napoleon at Austerlitz
— Adam Serwer🍝 (@AdamSerwer) August 30, 2020

We should not grow numb to this.

The head of FEMA cannot bring himself to say that the president is a trusted source for coronavirus information. pic.twitter.com/sB6bzzC2wO
— Peter Wade 🤦‍♂️ (@brooklynmutt) August 30, 2020


Breaking via NYT: The Justice Department secretly took steps in 2017 to narrow the Russia investigation, according to former law enforcement officials, keeping investigators from completing an examination of Trump's personal and business ties to Russia.https://t.co/67m7IOsB40
— Kyle Griffin (@kylegriffin1) August 30, 2020

Conspiracy minded propaganda is free. In-depth factual news reporting is hidden behind stupid fucking paywalls half the time. Which do you think us going to get shared on social media more often?
— Hesiod Theogeny (@Hesiod2k11) August 30, 2020 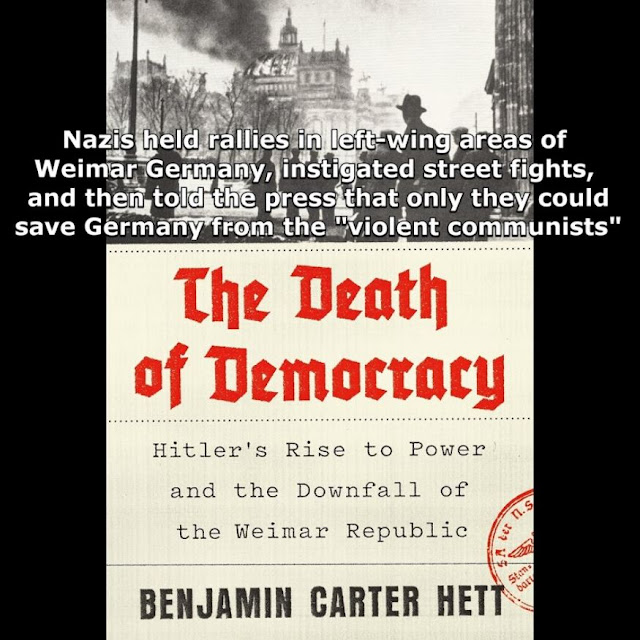 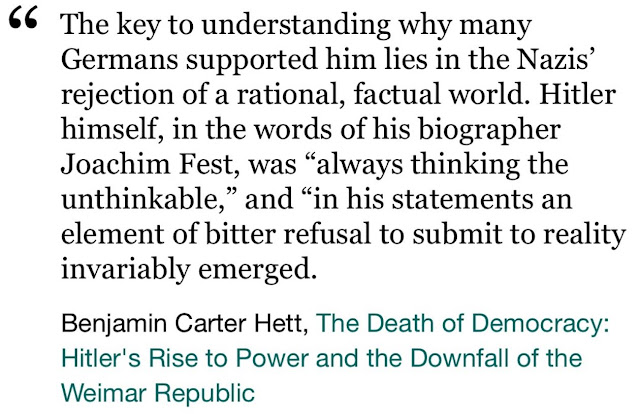 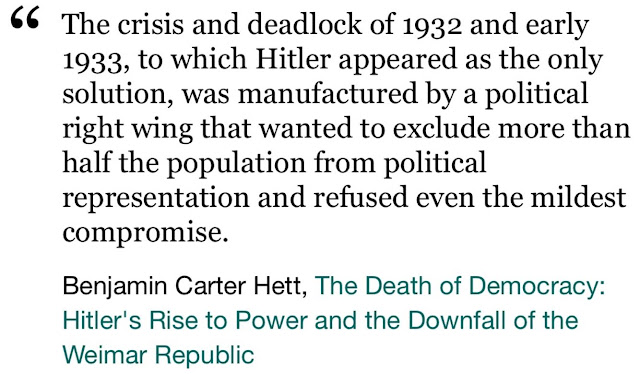